Brazil Prepares for the World Cup

If I’ve learned one thing from living in South America, it’s that soccer is not just a sport – it’s a religion and a way of life.  Walk into your local grocery store during a soccer game, and all eyes will be glued to the television set.  That Brazil will be hosting the 2014 World Cup is thus exciting news for those of us who live down here.  And if the World Cup were not enough of a responsibility, in 2016 Brazil will once again be on display to the world as it hosts the Summer Olympics in Rio de Janeiro.  While I hesitate to pull a Mitt Romney and ask if they’re ready,  the rest of the world has lots of questions.  What follows are some of the issues that have been making headlines in Brazil and around the world as Brazil prepares itself for the first of these two massive events.

Dilma Rousseff, President of Brazil, and Sepp Blatter, president of Federation Internationale de Football Association (FIFA.), are currently at a standoff. The disputes represent the typical problems associated with staging a world-class event in a developing economy.  FIFA has been known to make all sorts of demands on World Cup host countries.  In this case, the controversy revolves around Brazilian laws surrounding sporting events.

For example, FIFA wants to eliminate the half-price admission to sporting events that Brazil extends to senior citizens, and, in some cases, students.  Some Brazilian states ban the sale of alcoholic drinks inside the stadium.  FIFA wants the ban lifted.  Additionally, FIFA wants tougher penalties on the sale of pirated merchandise.  They will have to work out their differences as the World Cup approaches. 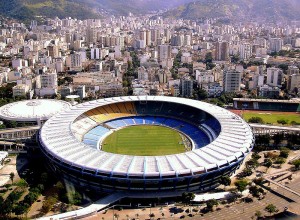 The detailed reconstruction of Rio de Janeiro’s renowned soccer temple, “The Maracana,” has triggered enthusiasm with equal amounts of resistance.  Fans adore this historic stadium, which was built for the 1950 World Cup and hosted the largest stadium crowd ever to view a soccer game:  200,000 people crammed into it for that World Cup final, between Brazil and Uruguay.  (Brazil lost 2-1, and it’s still a sore spot in Brazilian history.)  The projected plans for the renovation of the stadium have stirred some protests from the less wealthy segment of the Brazilian population. These renovations include:

An estimated 500,000 soccer fans from all points of the world will attend the World Cup in 12 different Brazilian cities.  The government’s controversial plans to accommodate them include demolishing some low-income settlements, called favelas, and building new hotels.   These changes will benefits the country’s tourist economy, but the local residents might be relocated as far as 50 miles away from their current homes.  The government’s powers of eminent domain will definitely be tested during these tremendous and disruptive building projects.

Among the major projects the Brazilian government has undertaken is a gondola line, which will run above the aggregation of favelas called the Complexo do Alemão.  The government announced that the 152 gondolas have the capacity to carry 30,000 people a day along the 2.1-mile route and will help make it easier for those living in these areas to get around the city and ease congestion.

The high crime rate in certain areas of the major cities of Brazil is something people often worry about, and World Cup fans will certainly have the same concerns.  The reality is that with basic precautions and common sense one can avoid problems in Brazil’s cities, and these problems are no different than thye are in many cities in Europe and around the world.

The safety threats for events of this magnitude are of course on a different scale from petty crime.  The government is developing advanced surveillance techniques and border control methods, while security officers are learning new techniques to thwart off terrorist attacks.  In 2011, for example, Brazilian soldiers and police raided crime-ridden slum in Rio De Janeiro, as part of a plan to rid the city of gangs.  They targeted the Mangueria neighborhood, which is close to the Maracana stadium.

Urban planners in Brazil are in the process of upgrading sustainable transport systems in the 12 World Cup host cities.  Federal, state and local governments have already invested about $6.5 billion for this this purpose, and the government expects that figure to increase with private investments.  Projects include:

Brazil’s is making a vast effort to present itself as a nation that is ready for prime time on the world stage.  For travelers, the preparations and development for both the World Cup and the Summer Olympics two years later promise to make it a country where the infrastructure has caught up with the natural and cultural attractions.

Vaya Adventures will soon be selling packages to the World Cup matches in Brazil, including tickets to the games, accommodations (3, 4 and 5 star options), and ground transportation and add-ons to see other sites in Brazil.  Please contact us for more information!