Carnival in Rio is arguably one of the biggest and most famous parties in the world. This year I let a friend talk me into experiencing it, but to be honest, it took some convincing. Before experiencing it for myself, the images I had in my head were less than positive. I had the impression that most people would be drunk from sun up to sun down, the beaches would be packed, and general debauchery and bad behavior would reign. 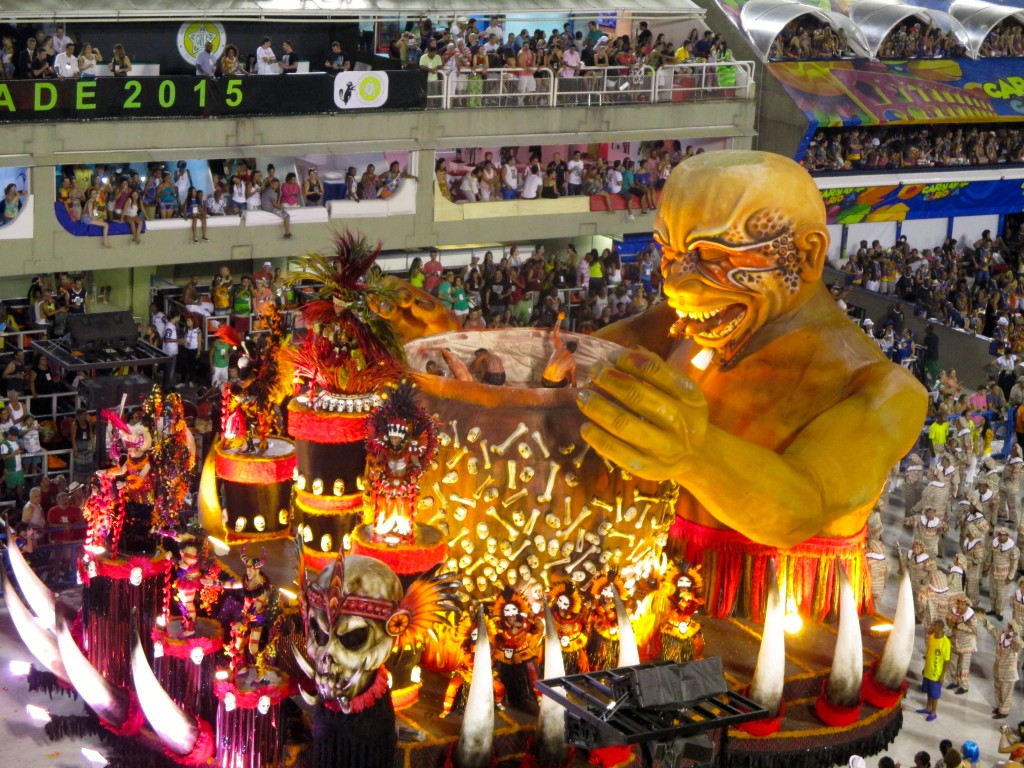 Parade float in the Sambadrome

So how did my experience measure up to my expectations? First, to better understand the modern spectacle that happens in Rio, it is interesting to look at its history.

Carnival is a syncretic holiday, one that mixes two belief structures; in this case, ancient pagan traditions and Catholicism. In pagan cultures like ancient Greece and then Rome, it served as a way to invert power dynamics. During this special time of year, the king was a peasant and the peasants were kings. This tradition is echoed in the “anything goes” attitude in Brazil: many people dress in drag, and others transform into alter egos, superheroes, or anything that they can dream up. It is a time to overturn social conventions. 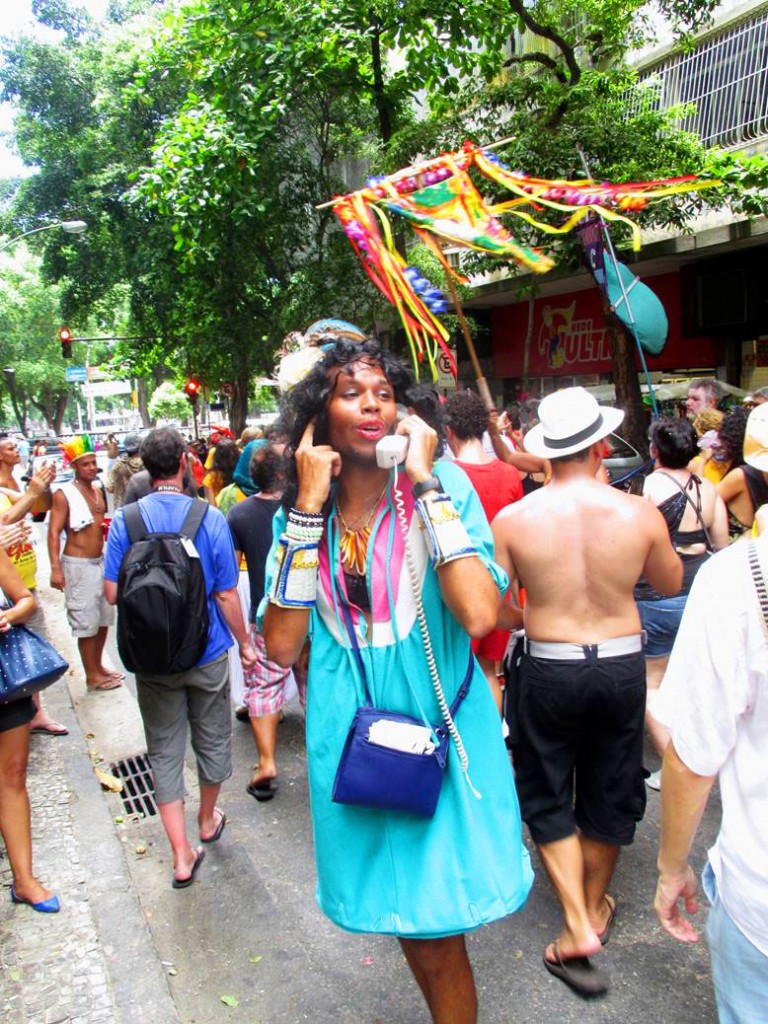 A festive fellow “talking on the phone” during a bloco

This tradition was eventually adopted by Roman Catholics and called Carne Vale (in Latin literally “farewell to flesh”), linked with the date of Easter, and celebrated as the final day of revelry before Lent. In places like New Orleans it is known as Mardi Gras or Fat Tuesday, and in most Latin American countries and the Caribbean it is still called Carnival. In Brazil they do not limit themselves to one day: the official festivities start the Friday before Fat Tuesday and wind down on Ash Wednesday.

Portuguese colonialists brought their tradition of Carnival with them to Brazil, where the tradition took on a new flavor and mixed with other ethnicities present in Brazil. One of the biggest influences came from the estimated 4 million African slaves who were brought to Brazil during colonial rule.

Today samba is perhaps the most iconic aspect of Rio’s Carnival, and in fact the music that today we refer to as samba was partly developed by the festival. Escolas de Samba, or Samba Schools, have performed during Carnival since the early 20th century, and these schools are credited with crafting the sound of modern samba. The schools practice year-round for their chance to parade in the Sambadrome. 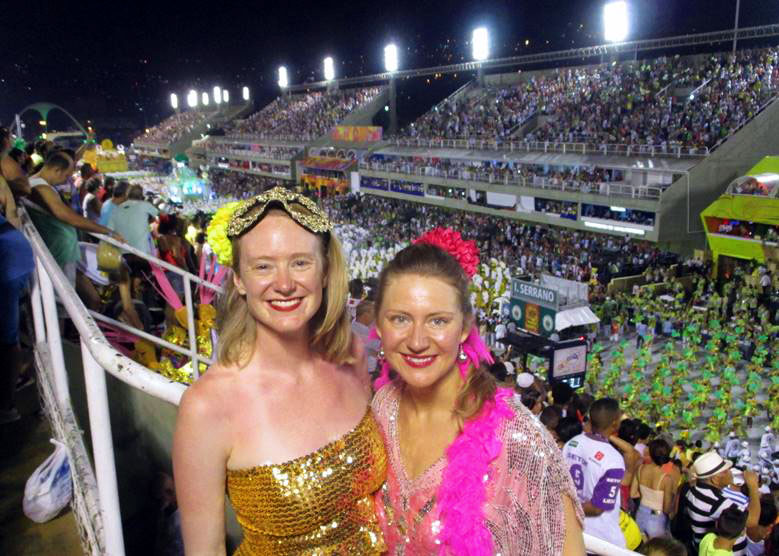 With a friend inside the Sambadrome, with an Escola de Samba performing for the crowd

The Sambadrome was built by celebrated Brazilian architect Oscar Niemeyer in 1984. It is a very large stadium (originally built with the capacity for 70,000 people, but the capacity was increased to over 80,000 people in anticipation of the 2016 Olympic Games). On Friday, Saturday, Sunday, and Monday of Carnival, the Samba Schools of Rio strut their stuff down the approximately 1 mile long runway. Prior to receiving the honor of performing in the Sambadrome, each samba school is evaluated by The League of Samba Schools of Rio de Janeiro. The judges evaluate the school’s performance based on things like allegories and decorations, percussion, the flow of the parade, and the costumes.

The Samba Schools who score lower during the evaluation are part of The Secondary League, and they perform on Friday and Saturday night. The top schools form The First League, and they perform on Sunday and Monday night. Due to scheduling I attended the Sambadrome on a Saturday night. I was more than impressed by the dazzling floats and amazing samba dancers of the Secondary League, so it’s safe to say any Carnival night in the Sambadrome will be an impressive spectacle. 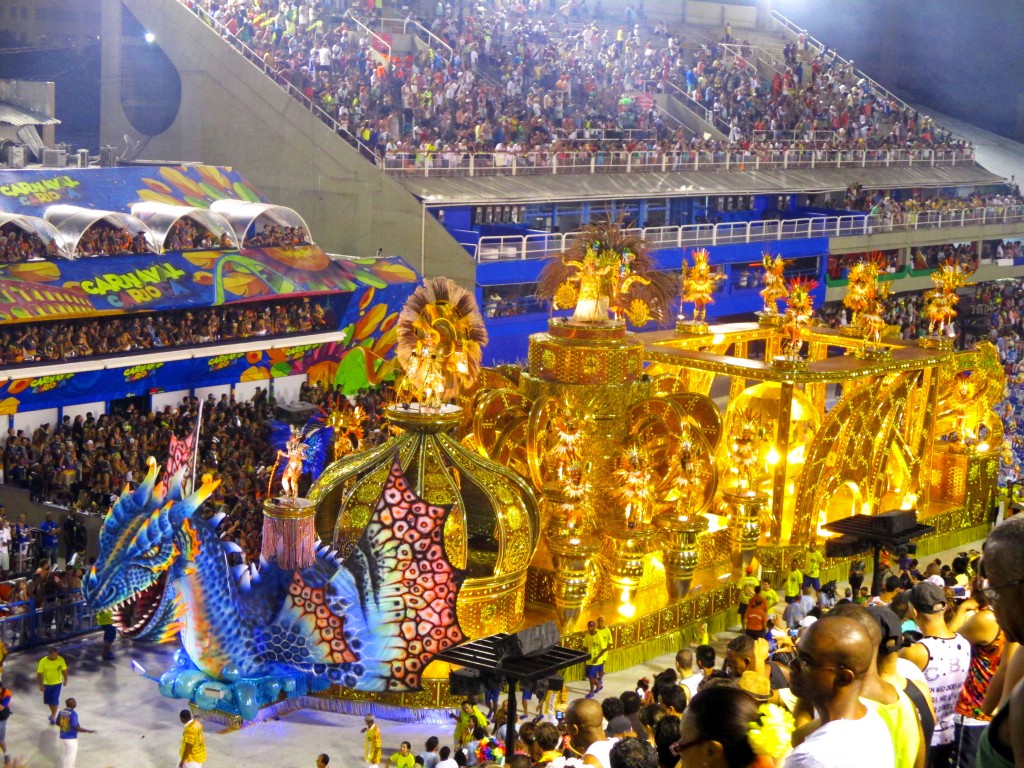 The Samba Schools that perform at the Sambadrome are an important part of the celebration and carry the pride of whichever neighborhood they represent, but blocos are actually the most beloved part of Carnival for many Carioca (residents of Rio). These are pre-scheduled and some are so well-known they draw a crowd of thousands. Samba schools or local bands play music and parade down the street, and anyone who wants is welcome to join in the bloco, dancing alongside the musicians. This is the part of Carnival that belongs to the Carioca, celebrated in the streets, a non-commercial and purely exuberant way to celebrate their Brazilian heritage. Contrary to my expectations, Carnival is celebrated by all Carioca, not just the youth looking to party. It is often a family affair, and children will don costumes with their parents and join in the blocos. 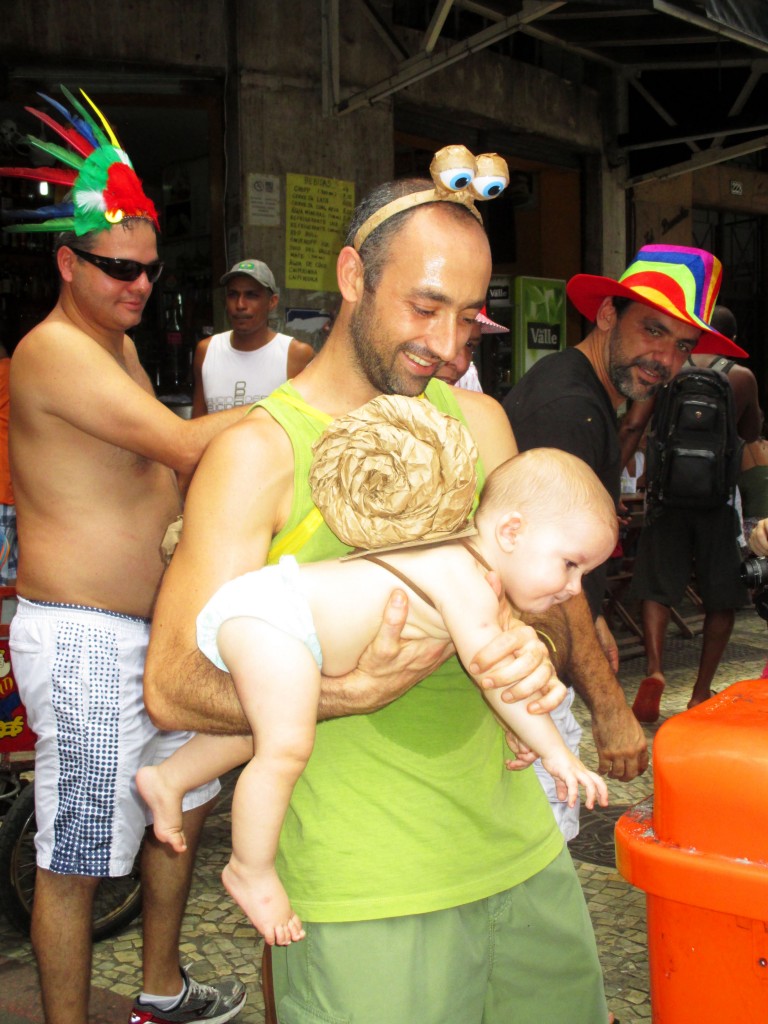 While some of my negative assumptions of the event proved to be true (there is plenty of drinking and a slight feeling of anarchy, perhaps echoing back to those pagan times of inversion of power), overall Rio in Carnival surprised and delighted me, and its history and unique expression in Brazil is a very special thing to witness. If you plan on visiting Rio at this time, be prepared to pay double or triple at hotels, know that you may be required to stay for the entire 5 nights of the event, and besides visiting the Sambadrome, do as the locals do and bring a fun costume and join in one of the many blocos.

Ask us how we can help you plan your visit to Brazil during Carnival and beyond.