It’s strange that my first encounter with ceviche was not in the pages of a glossy culinary magazine, nor was it on the cooking channel. It wasn’t even in Peru, in fact. No – it was on the streets and in the markets of La Paz, Bolivia that I first discovered ceviche. The fish used was freshwater pejerrey, the lime was tarter than Peruvian limes, there was less chilli and the toasted corn kernels were an addition I would not find in Peru, but it was in essence a true ceviche: marinated raw fish ‘cooked’ in spicy citrus juice and served with sliced onions, sweet potato and chunks of white corn. 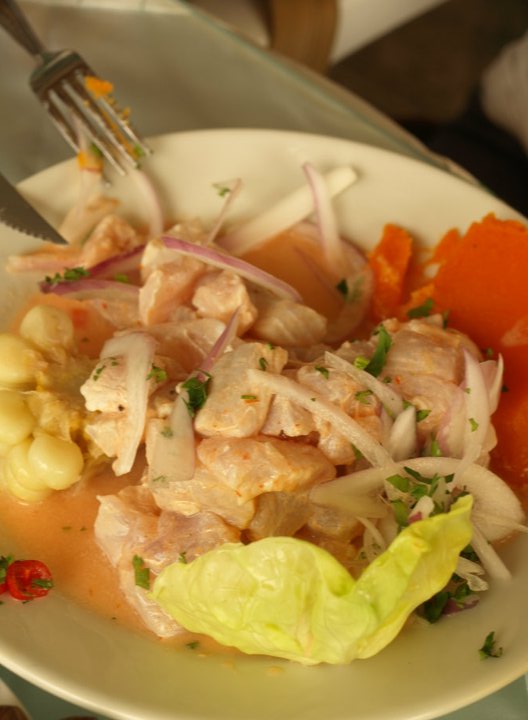 I did not know any of this back then, though. I just knew that at about ten o’clock every morning, Calle Rodriguez boasted a breakfast option which was quite unlike the soups or deep-fried dishes that are Bolivia’s staple. I grew to like it so much that I found an excuse to be in that part of town at that time of day at least three times a week.

It was only a couple of years later that I finally made it to Peru. Forget the Incas, ceviche was my primary motivation for going. In Peru, unlike Bolivia, ceviche does not have to be sought out – it is ubiquitous.

Ceviche was born in Peru, and although it still flourishes it has undergone some recent changes in its preparation. Traditionally the fish (usually corvina or sea bass in English) was marinated for several hours in a mixture of lime and chilli and onion and condiments but these days most cevicherias serve it after only a few minutes in the marinade. This alteration was actually pioneered by a Peruvian-Japanese chef named Dario Matsufuji, and as such it bears obvious similarities to the preparation of sashimi. Strange that Fujimori transformed Peru’s politics and one of his countrymen transformed their national dish.

Of greater importance, however, are the hygienic advances which allowed Matsufuji’s innovation. In the past, the fish was marinated for so long so that ceviche could be kept for days after its making; these days with fridges and ice buckets fish can be kept cold and disease-free right up to the point when it is served. Not surprisingly, the fish in modern ceviche is much firmer than its traditional counterpart due to the shortened ‘cooking’ time.

Although ceviche is associated with gourmet cuisine in the English-speaking world, in Peru it is as commonplace as a sandwich or a pizza. But, as with sandwiches and pizzas, it is possible to find good ceviche and bad ceviche; cheap ceviche and expensive ceviche; old-school ceviche and ultra-modern ‘fusion’ ceviche.

My favourite is the ceviche sold on beaches. Rent yourself a deckchair and an umbrella on any beach in Peru and the vendors will come to you, take your order, and return to their cooler box to prepare your request. You can’t beat the combo of a swim in the sea, fresh ceviche and an ice-cold Cusqueña.

Leaving the beach behind, there are cevicherias in every Peruvian town and city. A good rule of thumb is to follow the locals: if there’s a big queue outside, or if the establishment is regularly sold out by mid-morning, then you can rest assured the ceviche is good.

Of course, there are regional twists and gourmet options too. A northern speciality is ceviche de conchas negras – made from black mussels, and a lot spicier than regular ceviche. The towns of Huarmey and Haucho, north of Lima, specialise in duck ceviche, which uses orange juice instead of lime juice, and does involve cooking the duck. And Osaka restaurant in Lima offers haute cuisine fusions such as ‘ceviche sushi’.

My advice would be: try to eat ceviche every day you’re in Peru and seek it out once you’re back home (or even before you go to whet your appetite). No two will ever be quite the same, but that is the beauty of ceviche.