Cruising the Amazon Aboard the Tucano

On a recent trip to Manaus, I was fortunate to experience a 4 night / 5 day cruise on the Tucano. If you are looking to have a quality wildlife experience in the Brazilian Amazon, the Tucano is one of the very top options. This cruise offers just the right amount of comfort while allowing you to access the beautiful Anavilhanas Archipelago located in the Rio Negro, a main tributary of the Amazon River in the state of Amazonas in northern Brazil. Below are some aspects of the cruise that will be helpful to know before departing on this great adventure yourself. 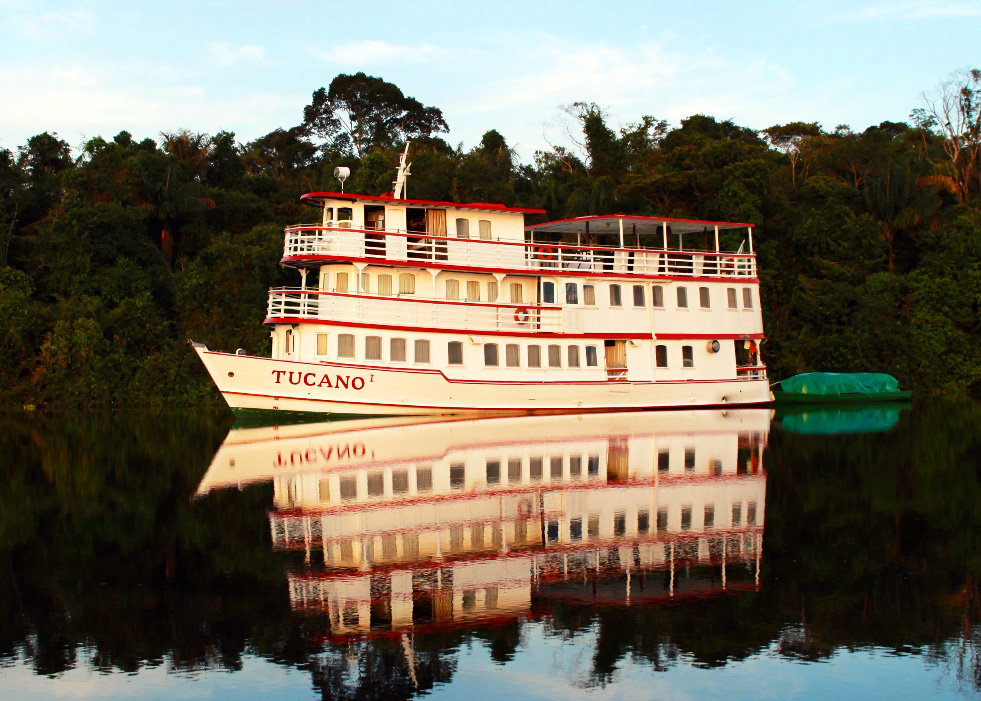 The Vessel
The Tucano is a 19 passenger vessel, built in the style of the classic river schooners that originally navigated the Amazon in the late 19th century.

The boat is comfortable, but it is not a luxury vessel, and there are some rustic aspects of which travelers should be aware. The Tucano uses the brown-colored water from the Rio Negro for the plumbing in the bathrooms. This means that you will take showers with the river water and that the toilet will also have this color water. The showers are “efficiency showers” and include a shower head suspended close to the toilet. (There is a shower curtain you can drape over the toilet to prevent the rest of the bathroom from getting wet.) There is air conditioning in the cabins, but it is important to know that to conserve energy and reduce the noise the captain turns off the generators from about 5:00 a.m. to 11:30 a.m. and from about 3:30 p.m. to 6:00 p.m.

There are two water stations on board the vessel with clean drinking water, where you are encouraged to fill up your water bottle frequently and stay hydrated. 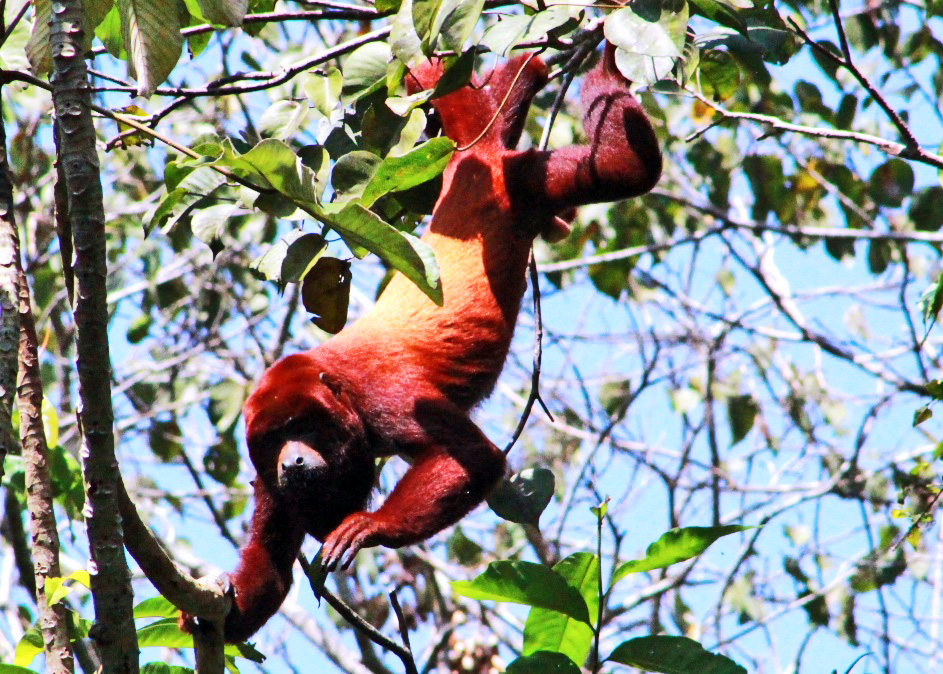 The Wildlife Experience and When to Visit
The Tucano features two expert nature guides, Edivan and Sousa, who have been guiding on the Tucano for the last 17 years. Their extensive knowledge of the flora and fauna of the Amazon, as well as their ability to mimic bird calls, enhanced our outings tremendously. After every outing the guides wrote down the type of animals and insects we spotted on a large white board, and it was fun to see the board fill up over the course of our 5 day cruise.

The dry season usually runs from about July to November and the rainy season is usually from December to June. August and September are often the hottest months in this area of the Amazon. There are generally more animals present in the dry season because there is less water in the environment for them to expand out into, so it is easier to see things like caiman (which like to rest on sand banks that become exposed as the water level drops) and river otters (which build dams that get flooded in the wet season, causing them to move farther inland). However, I visited in the middle of the rainy season and saw an abundance of animals. 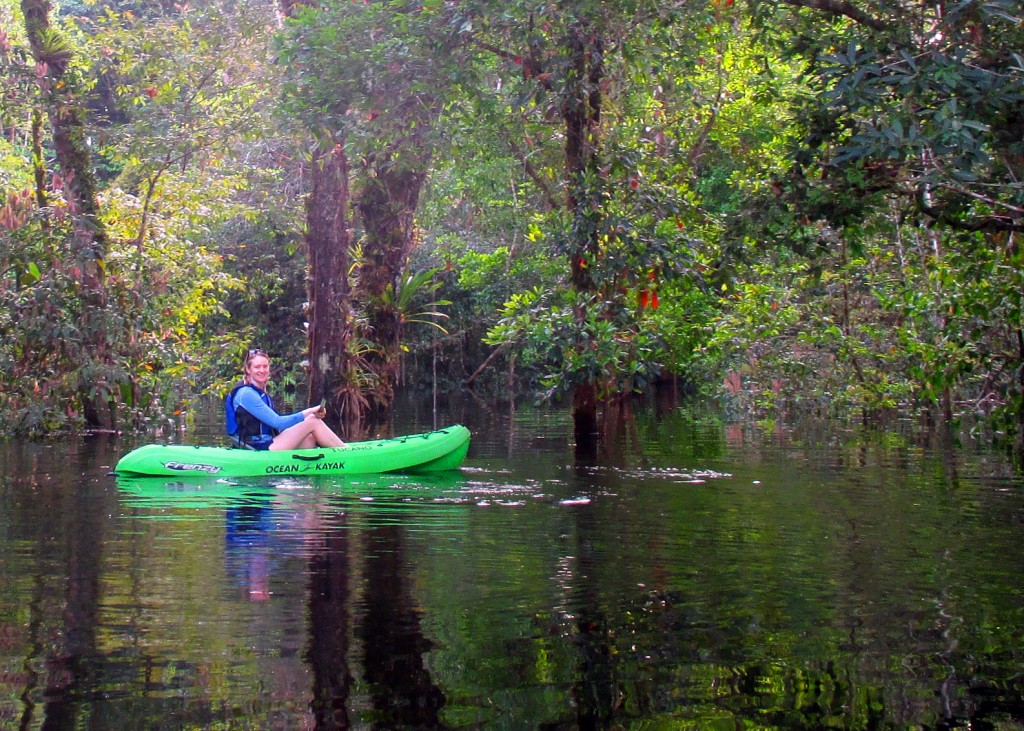 The pH of the Rio Negro and Absence of Mosquitos!
Prior to my trip our friends at the Tucano had informed me that the Rio Negro has very little silt in the water and is very low in nutrients; this makes the pH of the water high and therefore inhibits the proliferation of insects. Even after hearing this from the very experienced operators of the Tucano, I have to admit that I was a little skeptical. My last experience in the Amazon had me covering myself head to toe with mosquito repellent, and even then I left the jungle with some bites. But I can personally attest to this wonderful aspect of traveling on the Rio Negro. While you are close to this body of water there are zero mosquitos. As we sat quietly on the canoes every morning and evening watching mammals and birds in the tree tops, I marveled at what a delightful and comfortable experience it was to not be bothered by a single mosquito this deep in the Amazon. We took a few jungle walks during the cruise which took us farther inland and away from the Rio Negro. Depending on the time of year, these areas have potential to have some mosquitos, so it’s good to come prepared with insect repellent, but even then it’s a dramatically smaller amount than other parts of the Amazon. 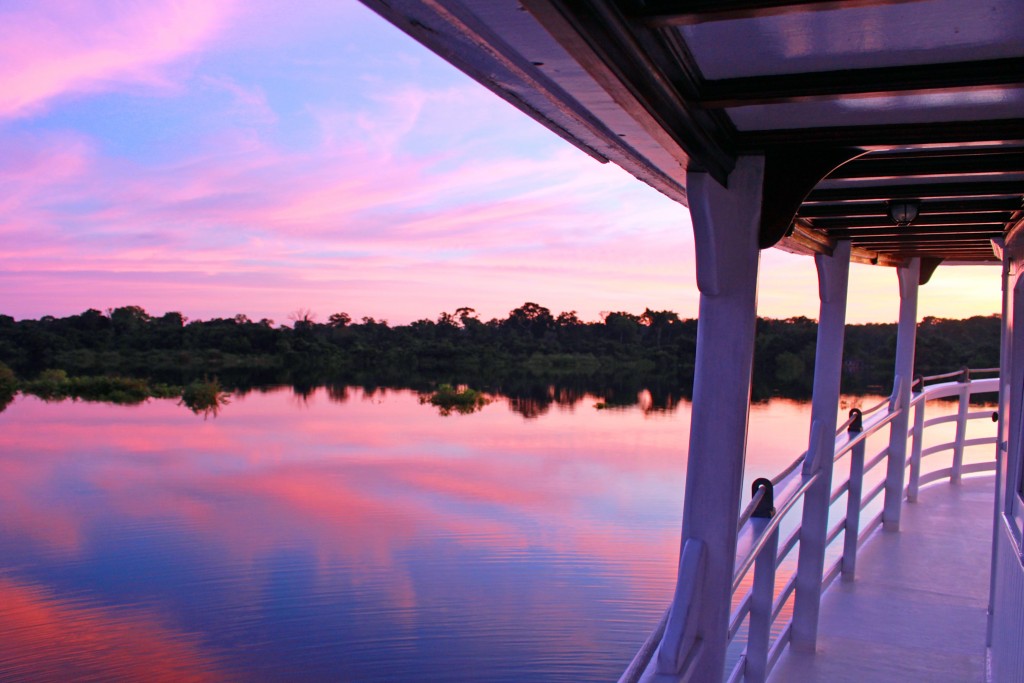 A Normal Day on the Tucano
A cruise on the Tucano is an active experience. The day begins early, with a wakeup call at about 5:30 a.m. My favorite part of the cruise was witnessing the spectacular pink sunrises over the Rio Negro. After a little time to get ready and to have coffee or tea, we set off to observe the morning jungle life.

Most days we went out on motorized canoes with the guides at the front of each canoe. A few mornings we were able to head out in one- or two-person kayaks if we wanted to be more active and enjoy the silence away from the engines of the motorized canoes. I opted for the kayaking and was awed by the beauty of the Amazon in the early morning. We paddled through flooded forests, the sunshine streaming through the thick canopy, with only the songs of birds breaking the silence.

After about 2.5 hours of observing wildlife we headed back to the Tucano, had a complete breakfast, and spent a little time relaxing as the Tucano navigated to our next destination. We then had a jungle walk or went out again on the canoes at about 10:00 a.m., then got back on the Tucano for lunch at 12:30 p.m. During the hottest part of the day between about 1:00 p.m. and 3:30 p.m., we navigated through the jungle to our next destination. Some travelers chose to relax on the upper deck where there is plenty of shade and a beautiful breeze, while others took naps in their cabins. At around 4:00 p.m. we set off for the afternoon excursion. One day we even swam in the Rio Negro – yes, this is possible and completely safe in certain areas and at certain times of day! At 7:00 p.m. it was time for dinner, and on a few evenings we set out after dark with large spotlights to observe the nocturnal animals.

Logistics
The Tucano departs from and returns to the pier outside the Hotel Tropical in Manaus. The hotel selection in Manaus is not up to the standards of many other large cities in South America, and currently the Hotel Tropical, though a bit dated and quirky, is the best option. It is also very convenient to stay here before boarding the Tucano because this is where the guides meet you to check in for the cruise. Manaus is the capital city of the state of Amazonas and is accessible by an approximately 4 hour flight from Sao Paolo or Rio de Janeiro.

A city of 2 million people, Manaus has a thriving economy that is largely centered on manufacturing, and as you glide back into Manaus on the last evening of your Tucano cruise, you will pass by factories and massive shipping vessels that transport supplies from the Atlantic Ocean up the Amazon River to this manufacturing hub and send them out again all over the world. While the city of Manaus might be jarringly large, congested, and modern to travelers who are interested in experiencing the wildness of the Amazon, it is a unique and fascinating city and worthy of some time. We recommend spending 2 nights in Manaus before the start date of the Tucano cruise. On your full day in Manaus we can arrange a privately-guided city tour of the historic center. The highlight of this area is the fantastic Teatro Amazonas, a lavish European-style Opera House whose materials were all imported from Europe at a staggering cost by wealthy rubber barons during the late 19th century.

For more information on the Tucano, or if you’re interested in hearing about other options for Amazon River cruises, just give us a call!