Brazil has a guide to beaches known as the Guia Quatro Rodas Praias.  In all of Brazil, only four beaches received a rating of five stars from this guide, and three of them are located on Fernando de Noronha, an archipelago located 525 kilometers off the coast of Pernambuco in northern Brazil. 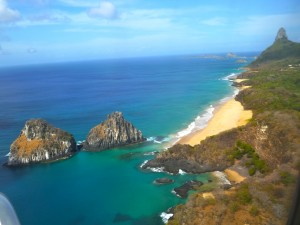 Morro dois Irmãos and Praia Cacimba do Padre from the airplane

There are 21 islands in the archipelago, but only one is inhabited – Fernando de Noronha Island.  Travel to the island is regulated by the Fernando de Noronha Marine National Park, and visitors have to pay a visitors tax for each day they are on the island, as well as a park entrance fee.  The island is only reached by two flights per day, one leaving from Recife and one from Natal.  This keeps the tourist population low, meaning that finding a secluded stretch of sand on one of the idyllic beaches is fairly easy.

There are taxis and a public bus that travels down the one paved road that runs through the center of the island, but most visitors opt to rent buggies to get around.  These buggies are little more than glorified golf carts, and one ought to be comfortable driving a manual transmission, because the clutch leaves a lot to be desired. 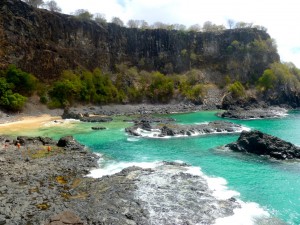 On a recent visit to Fernando I jumped in my buggy and set off to visit the five-star beaches: Praia do Sancho, Praia do Leão, and Baia dos Porcos.  While these are the top-rated beaches, there are plenty of others that don’t feel like a downgrade, such as Praia Cacimba do Padre, which offers spectacular views of the Morro Dois Irmaos (Two Brothers Hill) and a relatively tranquil atmosphere.

In addition to beaches, Fernando is known for its local fauna, including a population of spinner dolphins that are frequently spotted in the water around the island.  The National Park built a large platform above an area known as the Baia dos Golfinhos (Dolphin Bay), and if you are willing to wake up early enough (starting around 6 a.m.) you can watch the spinner dolphins do their thing – spin and cavort in the early morning sun.  At Baia do Sueste it’s possible to rent snorkeling gear and a lifejacket and swim out some 300 yards to meet up with the enormous sea turtles that frequent the area. 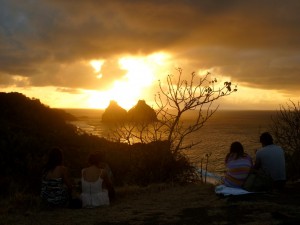 Sunset from Forte do Boldro

Prices are notably high in Fernando for accommodations and food – this is a place where you cannot expect to get by on a dime, but as they say: Paradise comes at a price.

If you’re interested, ask how we can incorporate this remarkable place into your trip to Brazil.