Ever since I lived in Argentina, I’ve had a thing for movies from or about Latin America. I haven’t watched everything, but I have watched a lot. Here’s a list of four that have achieved global success. I’ll do a blog post on four lesser-known films soon. 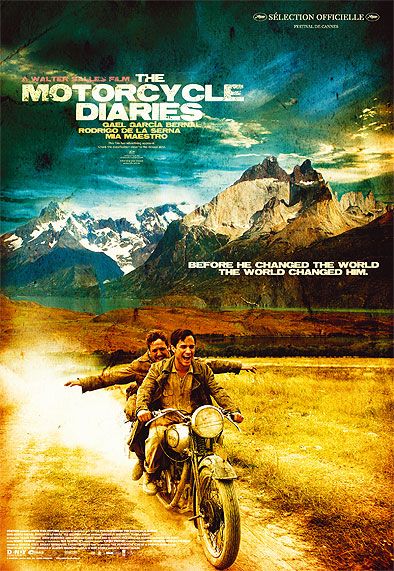 This tells the story of the medical student Che Guevara and his doctor friend Alberto Granado’s trans-continental journey on a highly temperamental Norton 500 motorcycle. Although their final destination is a leper colony in the Peruvian jungle, when they set off their main motivations are to have fun and there are plenty of comic moments throughout the film.

The further they progress, the more the pair is forced to think about the inequality which characterises their continent. An encounter with the atrocious working conditions in a Chilean copper mine and an epiphany at Machu Picchu are galvanising moments and by the time they reach the leper colony Guevara is already heavily politicised. As well as the interesting insights it gives into one of the 20th century’s most iconic figures, this movie is also worth watching for the amazing scenery.

This list could have been dominated by Mexican films, what with the work of Alejandro González Iñárritu, Luis Buñuel and Carlos Reygadas, but when forced to choose between them all I settled on this controversial production by Alfonso Cuarón.

I think I like it so much because of what it doesn’t attempt to do. Its entire storyline is an aside in the bigger picture of its protagonists’ lives and although it asks many questions of the viewers it makes no effort to provide answers.

The story centres around two adolescent boys who go on holiday in search of a mythical beach with an older woman – Luisa, the Spanish wife of one of their cousins. The film is sexually explicit, and this caused no end of headaches for its rating certificate in various countries, but it is also poignant, light-hearted and exceptionally well acted and directed. The carefree atmosphere of an idyllic summer fling is tinged throughout with a sense of unease and the film’s dénouement makes everything that precedes it worthwhile.

The other films on this list all depict (in part, at least) a romantic ideal of Latin America, but this Brazilian masterpiece is gritty, visceral and urban in the extreme. Poverty, gangsterism and hardship might reach their epitome in Rio de Janeiro’s favelas, but similar themes recur in all big Latin American cities.

City of God is based on a novel of the same name, but it is also heavily inspired by true events. All but one of the actors are non-professionals from the favelas of Rio. The plot centres around the ongoing warfare between two rival gangs in the 60s, 70s and 80s. The mayhem is held together by a sympathetic narrator who attempts to distance himself from the violence and harbours dreams of becoming a successful photographer.

Although the film is shocking in places and may offend sensitive viewers, I consider it a must see for anyone planning a trip to Latin America. Inca ruins and spectacular landscapes are all very well, but they should be seen in context.

The plot of this film is a bit jumbled and sensationalism was definitely favoured over historical accuracy in its screenwriting. Its cinematography, however, is splendid (it won the Oscar): the opening waterfall scene stands out, but the pervasive foreboding which oozes from the jungle is what really hooks me. It also deals with one of the most fascinating episodes in South American history: that of the Jesuits’ establishment of what some consider to have been extremely successful missions and their subsequent expulsion as a result of the Treaty of Madrid.

The Mission inspired me to visit the mission country of Paraguay, Bolivia and Argentina and for that alone it warrants an inclusion in this list. My time in the missions must go down as my best travel experience ever, and I have The Mission to thank for it.