From Iron Man to Big Ice: An interview with Vasso Kelly

Below is an interview with an exceptional Vaya traveler and athlete, Vasso Kelly, who visited Argentina in December 2017. She completed an Iron Man event in the coastal town of Mar del Plata before heading to Patagonia to complete the “Big Ice” trek across the iconic Perito Moreno Glacier and the strenuous day hike to the base of the famous Fitz Roy peak. When the local operator of the Big Ice trek told her that they couldn’t do the excursion due to age restrictions, “no” was not an answer this endurance athlete was going to take. 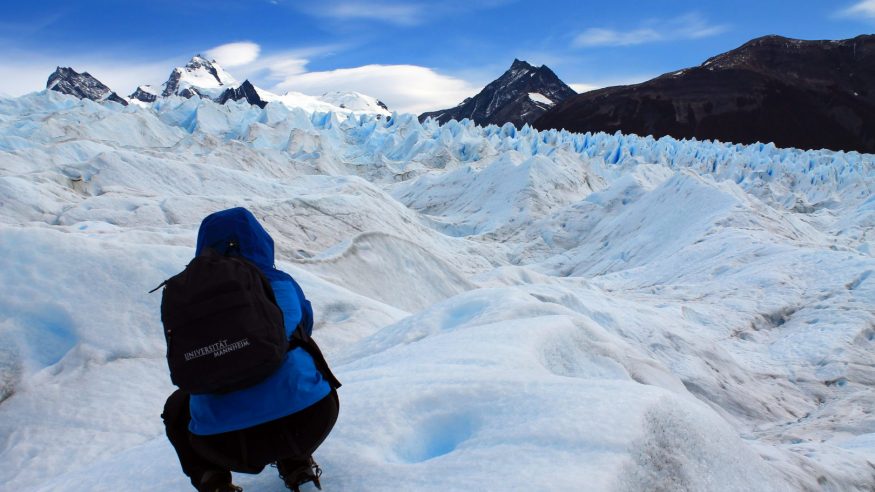 How many Iron Mans have you done, Vasso?

This was my ninth over the course of 15 years. Just to be clear, an Iron Man is a description of a distance of a triathlon. So, when you say Iron Man it describes a 2.4 mile swim, a 112 mile bike and a 26.2 mile run, versus saying I’ve done 80 triathlons, which just means I’ve done 80 races that had a swim, bike and running component to them.

What drew you to the Iron Man in Mar del Plata, Argentina? Was it your first international race?

I have done them all over the world. The quick answer is because of timing in the year and because of what the course looked like on paper, which was a flat course, and it looked really beautiful, all along the coast in Mar del Plata. It also had to do with being in December. I was navigating my timing according to my daughter, who was figuring out her college / gap year plan.

I did it with my training partner, who is another nurse, so we were working on our schedules together and she definitively wanted a flat course, which is what also contributed to us picking Mar del Plata, because it is very flat.

So how did it end up going? What was a memorable moment of doing the Iron Man there in Mar del Plata?

So, that’s a bigger answer. The short answer is that it ended up being the hardest Iron Man I have done, although we had anticipated it being the easiest.

Iron Man, although it is swim, bike, run, I’ve always said that it is swim, bike, run, nutrition and weather. What ending up happening is that the weather created a very challenging race for us. During the week as we led up to the race, the water was scary. There were white-caps going all the way out. We usually do quite a bit of practice swimming, and the only thing we did was we put our wetsuits on and we got in the water so we sensed what the water temperature was, but actually trying to swim in this high-current, very rough water, we both decided we’d save that experience for race day, because we didn’t feel that we’d get any comfort psychologically from conquering it beforehand. I actually went and spoke to the swim director before the race and asked, “When do you decide if this is a safe experience?” They said they have lots of plans in place, and first and foremost is to plan a safe race.

At the end of the day, we did do the full swim. It was pretty rough. It was two loops of a 1.2 mile swim. To enter the water you had to dive through the waves that were breaking to get out, and then on the way back in you were being splashed on the back by the waves, and then you had to come out on shore and cross a timing mechanism, and then go back. The second lap was definitely harder than the first. The winds had picked up.

So, we got out of the water and we thought OK, we did that, that was going to be the hard part of our race. We got on the bikes and the winds were reported at 35-40 mph. So, needless to say, what we thought was going to be hardest part of the rice, the swim, ended up being the easiest part of the race. The winds were crazy. When you are an athlete at my level, with that headwind, we were going about 6 or 7 miles per hour. So, what we thought we would get done in an hour could take you up to two hours. My overall time was over an hour and 20 minutes slower than what I was hoping for.

There’s something about a headwind that literally sucks the wind out of you. It is very different than climbing a hill, and then going down the hill, where you exert yourself in a different way. But there is something about going into a headwind that really is depleting. Truth be told, 20% of the field dropped out. I don’t know what the average is, but that is definitely high. A lot of people dropped out during the swim, finishing the first lap and then saying there’s no way I’m going back in there. The bike was also two loops, and a huge number of people never even started their second lap.

The run was the same thing. We had 40 mph winds on the run, so we were kind of being tossed off the sidewalk. I did kind of a run/walk marathon, which was actually my plan anyway.

My training partner and I were together, which was great, and along the way we adopted an Argentine man, Javier, and we all finished together. But we were walking/trotting in garbage bags. It was freezing. It was windy. It was a long day. We finished at 11:50 p.m., which meant we basically had 10 minutes until we would have been disqualified.

Would we have liked to have had a better time and not had those struggles? Absolutely. I was almost two hours off my background goal. But Iron Man is about what race day presents you, and we finished. And really that’s all that we care about. We finished.

Wow, that’s awesome. Congratulations. So, after all that, you still had the energy to fly down to Patagonia and do all this ice-trekking and hiking? When you were told that the Big Ice trek on Perito Moreno would not be possible due to the max 50-year-old age restriction, what was your reaction? What did you do to overcome this?

I’m a Greek, stubborn girl, first of all. The whole thing on paper didn’t make sense to me, these arbitrary ages. I contacted them and told them our story, that we were 54 and 52 and we are coming down and doing this Iron Man, and we are in good physical condition, we are going to be racing for 15 hours. And his response was “tell me more.” I was kind of shocked. So, we both put our athletic resumes together and I told him I ski, I cross-country ski, I play tennis, I weight train, etc. I put together this whole substantiating thing about why we think we should be able to do the trek. We further defined our fitness level because for whatever reason, saying that we were going to swim 2.4 miles, bike 112 mile and run 26.2 miles – and I put it in kilometers for him – for whatever reason, he did not feel that was sufficient. Even that, in my mind, was shocking, really. But anyway, after we sent that he said, OK, we will let you do it.

It is billed as a 3.5 hour ice-trek, and I don’t really know how they determine their timing, but it is really a longer thing, an all-day thing. That could be because our private guide took us to a place to look at the glacier beforehand, but it definitely was longer than 3.5 hours. I think we had to hike an hour or an hour and half just to get to the glacier, and that was a challenging hike. Maybe part of that age restriction has to do with knees and joints because it is a little bit hard on your joints. You’re wearing crampons, you’re not stepping on flat surfaces. We were certainly fit enough, but had a new appreciation for why they had the restrictions. So, we did kind of go from “are you kidding me,” to doing it, to having an understanding that it is not that simple and easy.

It was an amazing experience. All of us agreed that it was a highlight. Iron Man aside, because that was in a box by itself, we would say that the Big Ice glacier trek was the highlight of the trip.