While researching a Vaya Adventures blog on Four key ingredients of Andean cuisine, I became fascinated by the humble potato and its role in Andean and world history. It started with an article in the Smithsonian magazine which then led me to an academic paper by renowned historian William H. McNeill and finally resulted in me reading an entire book on the subject: Potato: A History of the Propitious Esculent by John Reader.

Each source highlighted a slightly different aspect of the potato’s rise to world domination, but the basic facts were the same. Solanum tuberosum, as the potato should rightly be referred to, is native to the Andean regions of modern day Peru and Bolivia. In its natural form, the tubers are packed with poisonous glycoalkaloids, and tiny too. As John Reader observes, “It is difficult to imagine what might have initially encouraged people to experiment with them…yet archaeological evidence indicates that the process that ultimately produced edible cultivated potatoes began more than 8,000 years ago.”

Since then, Andean farmers have developed thousands of distinct varieties of potato, in a seemingly endless array of shapes, sizes and colors. One thing they have in common is that – as the International Potato Center’s website proclaims – “The potato yields more nutritious food more quickly on less land and in harsher climates than any other major food crop.” Furthermore, the fact that it can be freeze-dried as chuño means that it can be stored for months or years on end. 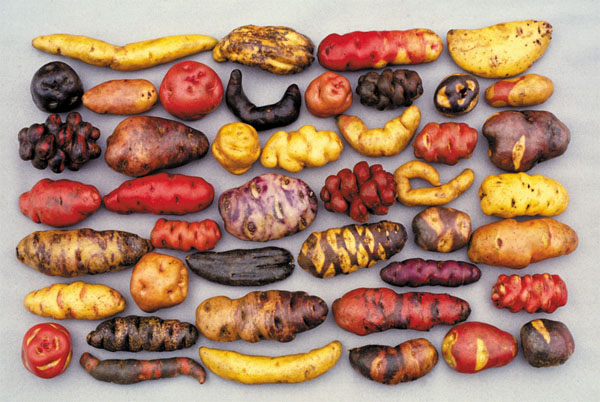 The potato sustained the soldiers and workers who (almost certainly under duress) fought and laboured the Incas to continental domination and were responsible for building Machu Picchu and the other marvellous ruins you will see on your once-in-a-lifetime Peruvian odyssey.

Once Francisco Pizarro and his fellow conquistadores sacked the Incas and took Peru and Bolivia for themselves, the potato did not wane in significance. Far from it, in fact: Solanum tuberosum sustained the widespread gold and silver mining which was to transform both South American and Europe and turn the Spanish empire into the richest in the world.

This was only the beginning of the potato’s influence on Europe. Spanish sailors who had used it to sustain themselves on the long voyage home planted it in their own fields and vegetable gardens. Most parts of Spain were unsuited to its cultivation, but in the Basque country and the Canary Islands, it flourished. From there it spread North, taking root in the more suitable climes of Italy, Germany, France, England and – perhaps most famously – Ireland.

At first this weird foodstuff was not greeted with enthusiasm, but by the time Diderot published his Encyclopedia in the middle of the 18th century it was at least accepted. His entry for potatoes included the following: “No matter how you prepare it, the root is tasteless and starchy. It cannot be regarded as an enjoyable food, but it provides abundant, reasonably healthy food for men who want nothing but sustenance.” Diderot considered the potato to be “windy,” but still, he was a fan “What is windiness,” he asked, “to the strong bodies of peasants and laborers?”

The potato gained in popularity, not only as a foodstuff but as a tool of economic growth and expansion. As McNeill noted in his essay, “By feeding rapidly growing populations, it permitted a handful of European nations to assert dominion over most of the world between 1750 and 1950.” Before the potato, “European living standards were roughly equivalent to those in Cameroon and Bangladesh today,” (Mann) but the potato – which was at least twice as nutritious as rival foodstuffs and could be grown in fallow fields – changed all of this.

From here the potato was taken to the colonies. To Africa, Australasia, North America and Asia. Nowadays a third of the world’s potatoes come from China. The potato was also linked with discovery of guano as fertiliser and the establishment of the fertiliser industry. This in turn resulted in the need for pesticides and the development of that industry.

The potato is now the world’s fourth-largest food crop, but the humble tuber from the harsh climes of the High Andes has had more influence on global history than the other three put together.

This blog serves only as a very brief overview. When you’re in Peru and Bolivia, make sure you marvel at the array of potatoes in the local markets and be sure to actually eat as many as you possibly can. Your private guide will gladly assist on both these fronts.