Posted by Gabrielle Venturi on May 2nd, 2014 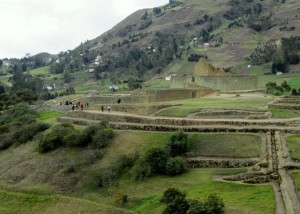 When most travelers think of the Inca Empire they think of Peru and iconic Machu Picchu. It might be surprising to some to learn that at its peak, the Inca Empire stretched through an incredibly large area of the continent, some 300,000 square miles, reaching as far north as Ecuador and as far south as modern day Santiago in Chile.

Ecuador’s largest Incan site is Ingapirca, located about 2 hours outside Cuenca. The site is not as complete or as immense as Machu Picchu, but Ingapirca is impressive in its own right.

Ingapirca was originally constructed by the native Cañari people who have inhabited this area of Ecuador for centuries (giving the province where it’s located, Cañar, its name). They were

conquered by the Inca, and the site of Ingapirca was a strategic location on the Inca Royal Highway that ran from Cusco to Quito. It may have been used as a tambo (a resting place on the road) or as an important place of worship. Ingapirca is located at 10,300 feet and built on a plateau, offering sweeping views of the mountains and valleys that surround the site.

The main building, the Temple of the Sun, displays some of the finest stonework you will see at any Incan site. The type of stone used at Ingapirca is hospitable to moss and lichen, giving many of the walls at Ingapirca a beautiful greenish hue.

Ingapirca has several large stones with deep holes drilled into the surface. Scholars believe these stones were used as a kind of lunar calendar and that when filled with water, the holes reflected the position of the moon in the sky and other constellations.

One of the things I found surprising about Ingapirca was the relative calmness of the site. It’s more off the beaten track than the more famous Incan sites in Peru (Pisac, Ollantaytambo, Machu Picchu), and it was lovely to walk around with my guide and take in the beauty of the site at a leisurely pace and with few other visitors to disrupt the tranquility. 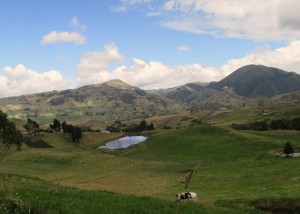 Most people continue to the town of Cuenca after their visit to Ingapirca, and my favorite part of the day was driving for about an hour along a narrow dirt road that passes through the fields around the site before joining with the Pan-American Highway. This is an agricultural area that is surrounded by green, fertile valleys. The local population is very traditional, and driving through this region gave me a precious glimpse of life as it is lived in the Southern Highlands of Ecuador. Many aspects of the local culture are still as they were in the time of the Incas, and I felt privileged to witness this way of life.

Ask us how we can incorporate a visit to Ingapirca into your itinerary to Ecuador.