My prize-winning, published account of a wild jaguar encounter in Brazil

When I got home after a jaguar speedboat safari in the Brazilian Pantanal, I felt that what I’d just experienced, racing through a river to come face to face with a jaguar hunting a capybara in the wild, was something truly exceptional – so much so that I emailed my account of the encounter to a travel writing competition in the UK. And wouldn’t you know it, I won!

The prize-winning article, “Face to face with Brazil’s most fearsome feline” was published in print October 21, 2017 in The Daily Telegraph’s travel section and can be viewed online here. 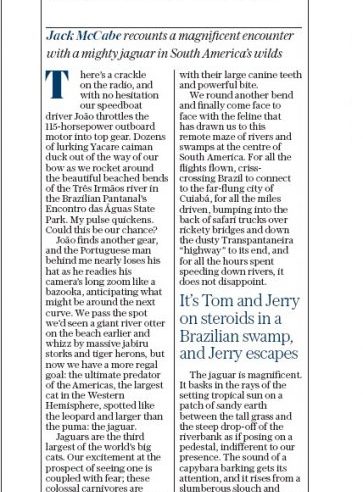 The jaguar’s capybara hunt may not have been successful (spoiler alert: the giant rodent makes an aquatic getaway), but the experience for the four of us in the speedboat undeniably was, and there was a spirit of joy in our little boat as we sped off into the sunset and back to our lodge, knowing that we were now among relatively few human beings ever to see this killer cat in the wild.

Jaguars’ range extends from the US-Mexico border down to the Brazil-Argentina border, and while conservationists’ camera traps confirm their presence in hotspots throughout that range, in most areas they are seldom seen by human eyes. For example, in the nearby Amazon Rainforest, though jaguars are thought to be numerous, one of our veteran guides reports having caught glimpses of only two in his 17-year career seeking out wildlife in the jungle.

But this was not the dense, dark jungle of the Amazon Rainforest, where a clandestine cat can easily hide. This was the Northern Pantanal, wetlands where an abundance of large prey, including herds of peccaries (wild pigs), capybaras (the world’s largest rodent), tapirs (a horse-like creature, the heaviest land mammal in South America) and millions of caiman (crocodilians so numerous here that in some areas of the river we literally could not go more than a few yards without one having to duck out of the way of our boat as we sped through the river) provide the food supply necessary to support the most dense population of wild jaguars anywhere in the world. (Yes, jaguars can eat crocodilians; my colleague Marci witnessed this on her recent Jaguar Safari!) The Pantanal’s wide open flood plains and exposed river banks are an ideal setting to observe jaguars unobstructed in their natural habitat. If you are ever going to see one, this is the place. Your own jaguar adventure story is waiting to be written in the Brazilian Pantanal.

Jaguars are threatened by habitat loss and illegal hunting. Read about NGO Panthera’s ambitious Jaguar Corridor Project, which seeks to protect and connect jaguar populations from Mexico to Argentina, and learn how you can support jaguar conservation here: Panthera Jaguar Corridor Initiative

Looking to plan your own Jaguar Safari? While no wildlife sighting is ever 100% guaranteed, you have an excellent chance of seeing a jaguar if you spend at least a week in the Northern Pantanal between the months of July and October, including multiple days of speedboat safari excursions like the one described above. Vaya can arrange a custom, private itinerary for you that maximizes your chances of quality sightings of jaguars and other unique wildlife, including premier accommodations, top naturalist guides, all ground transportation and assistance with flight routes to this remote region. 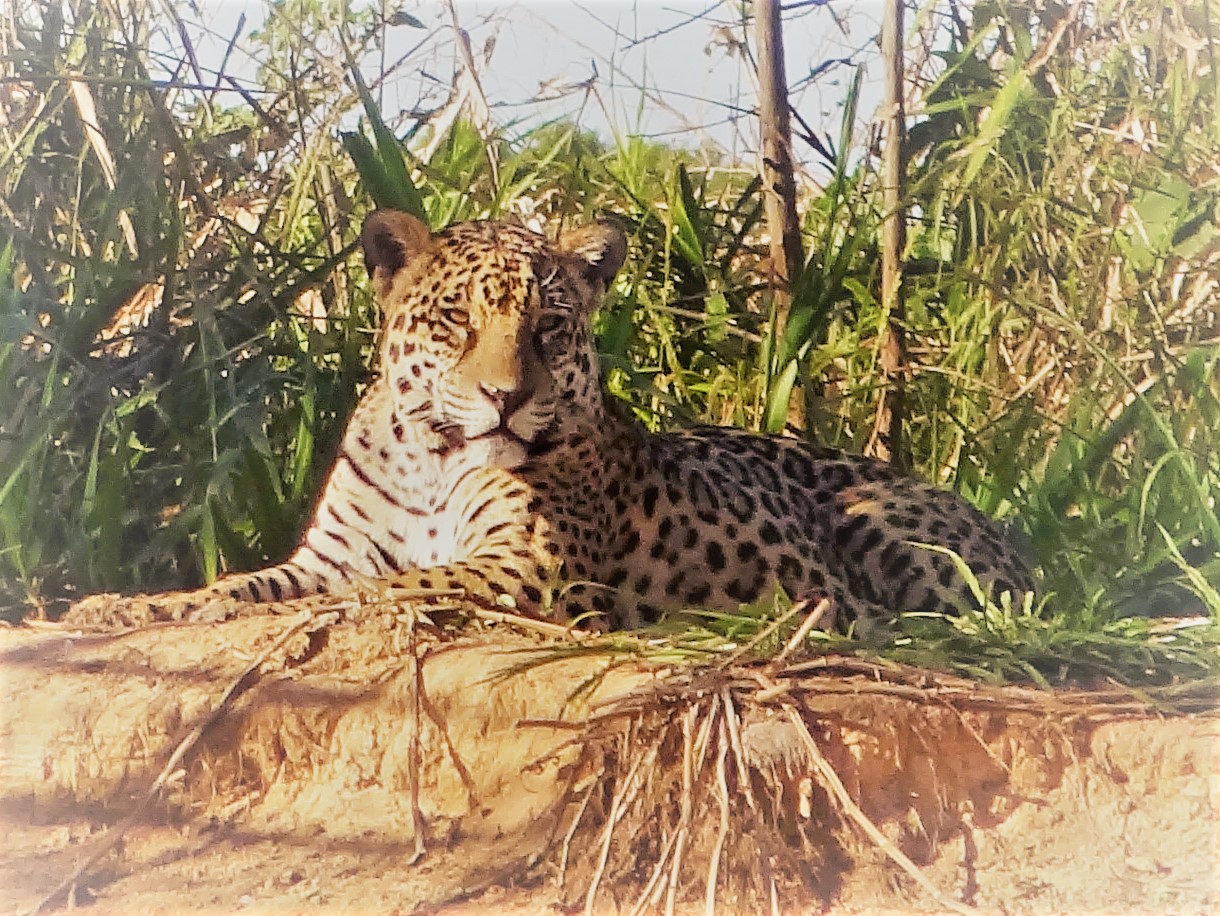 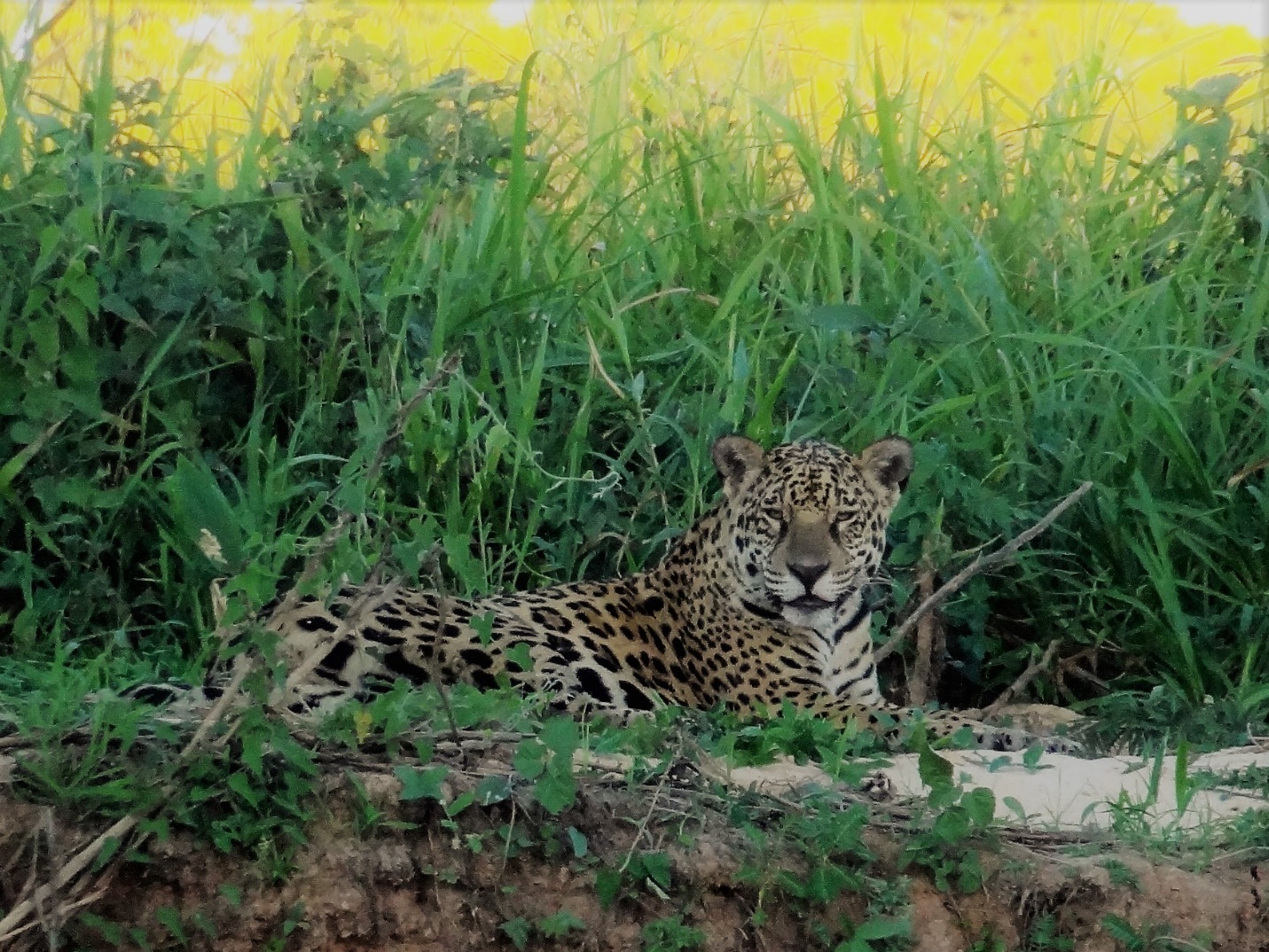 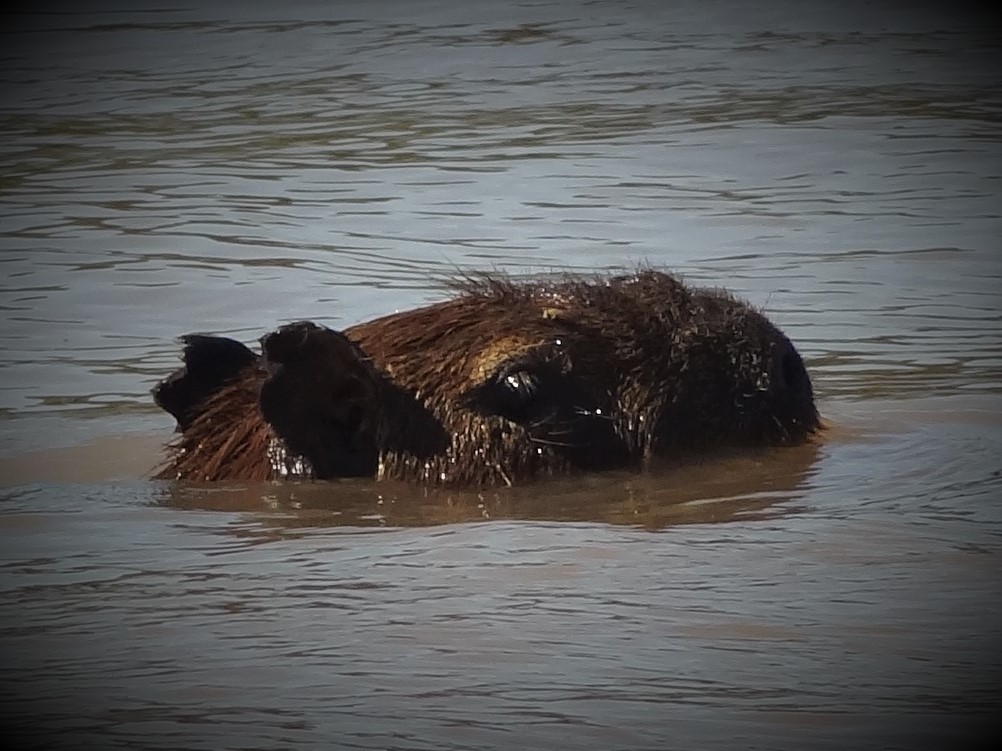 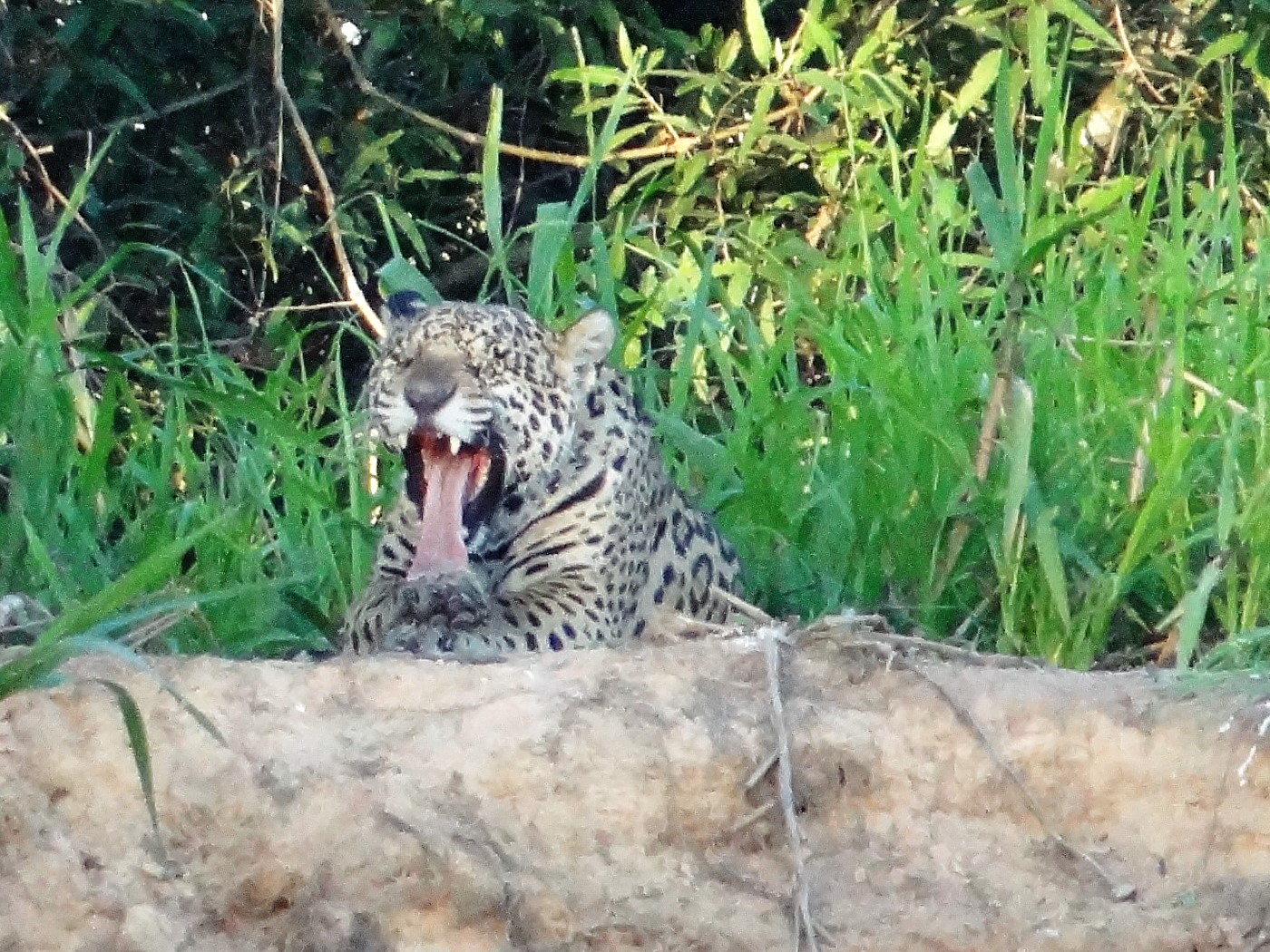 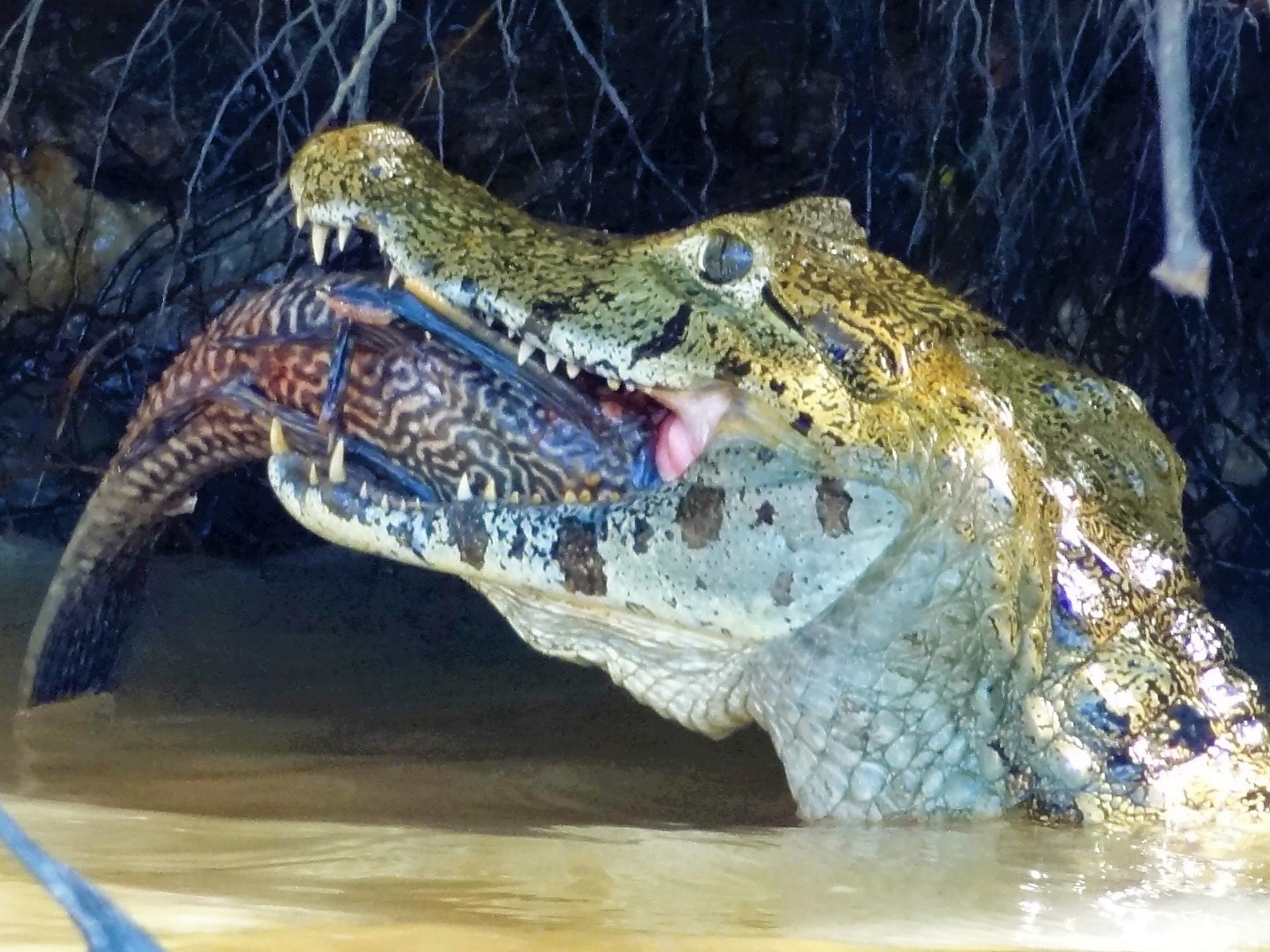 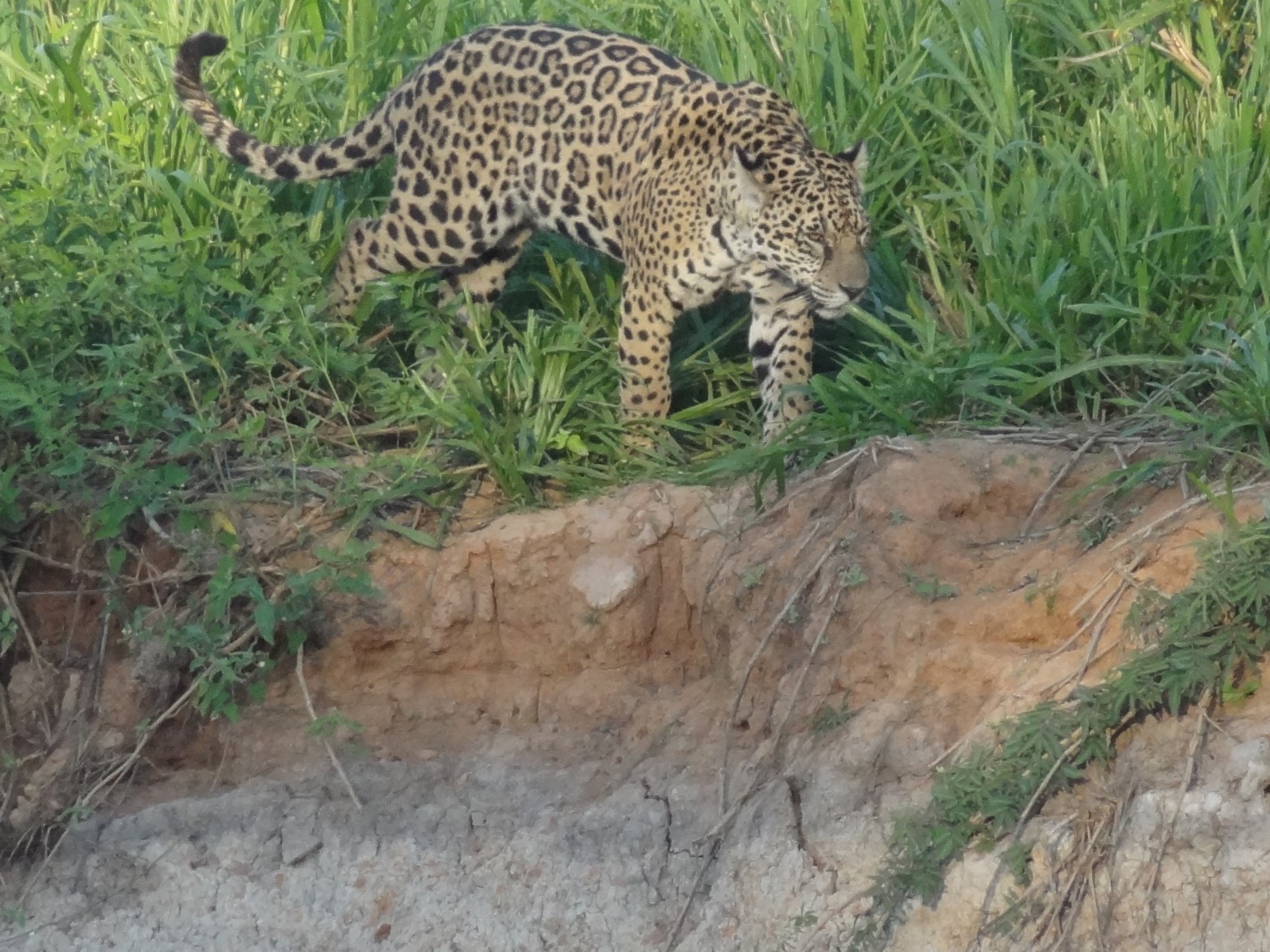 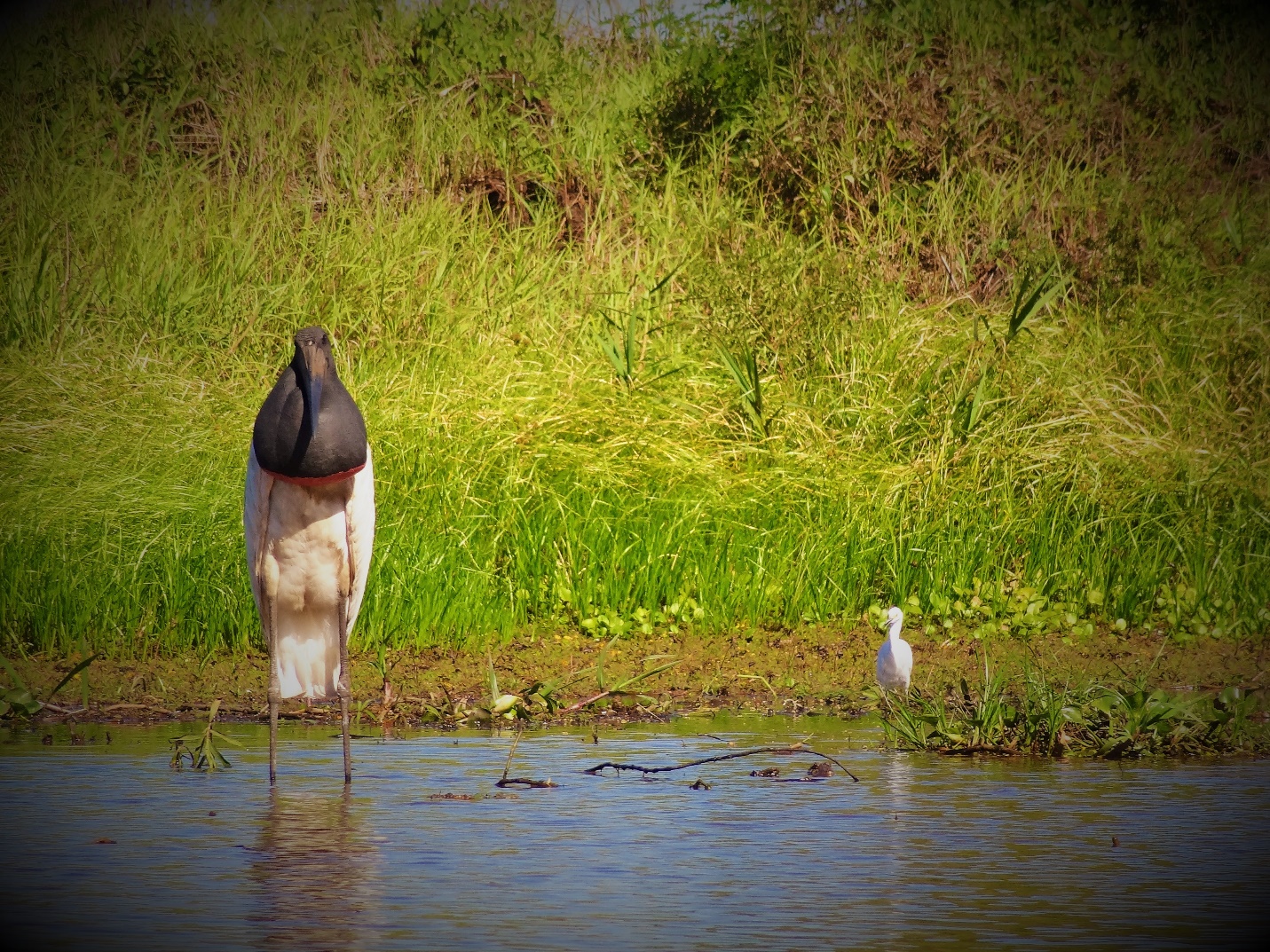 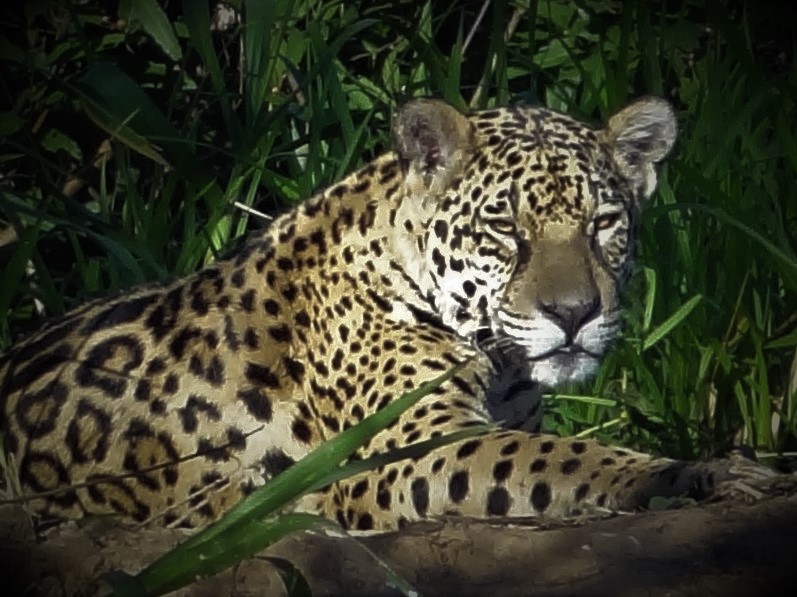 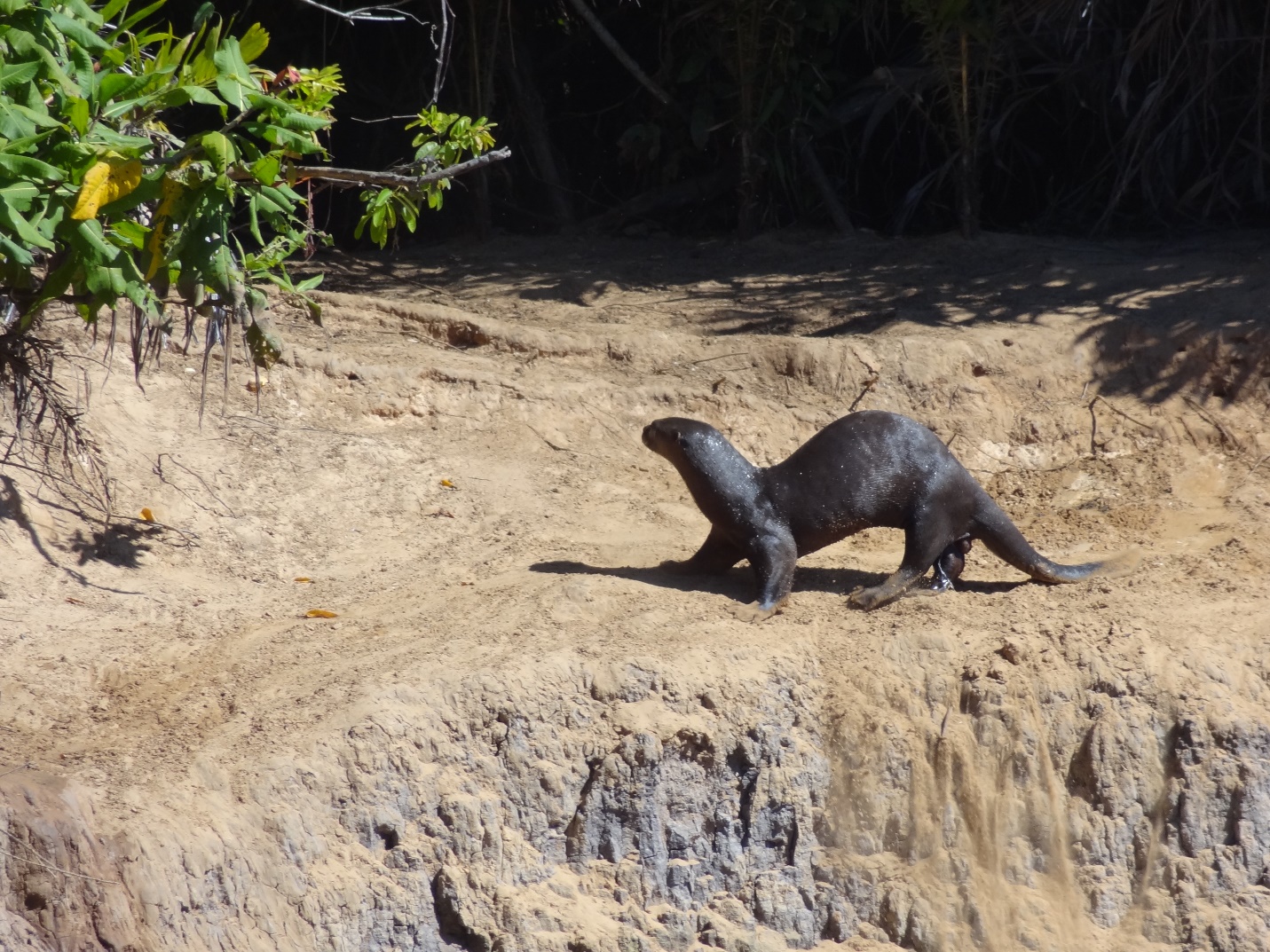 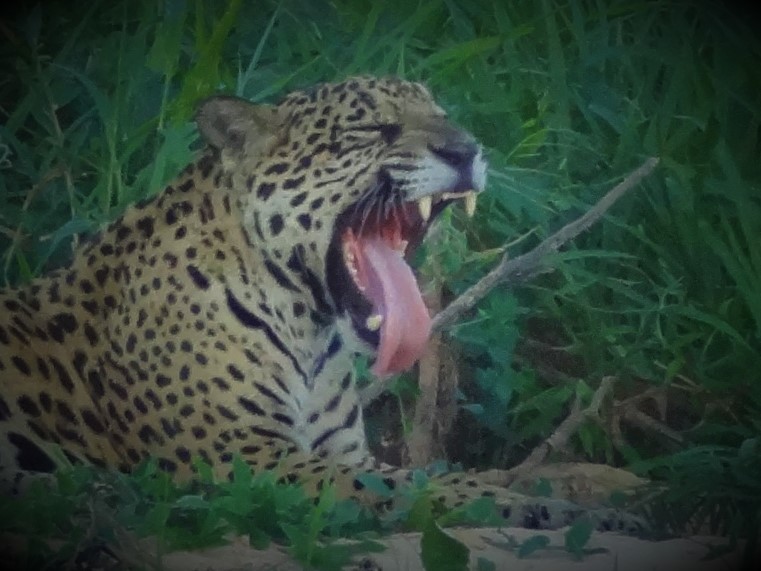 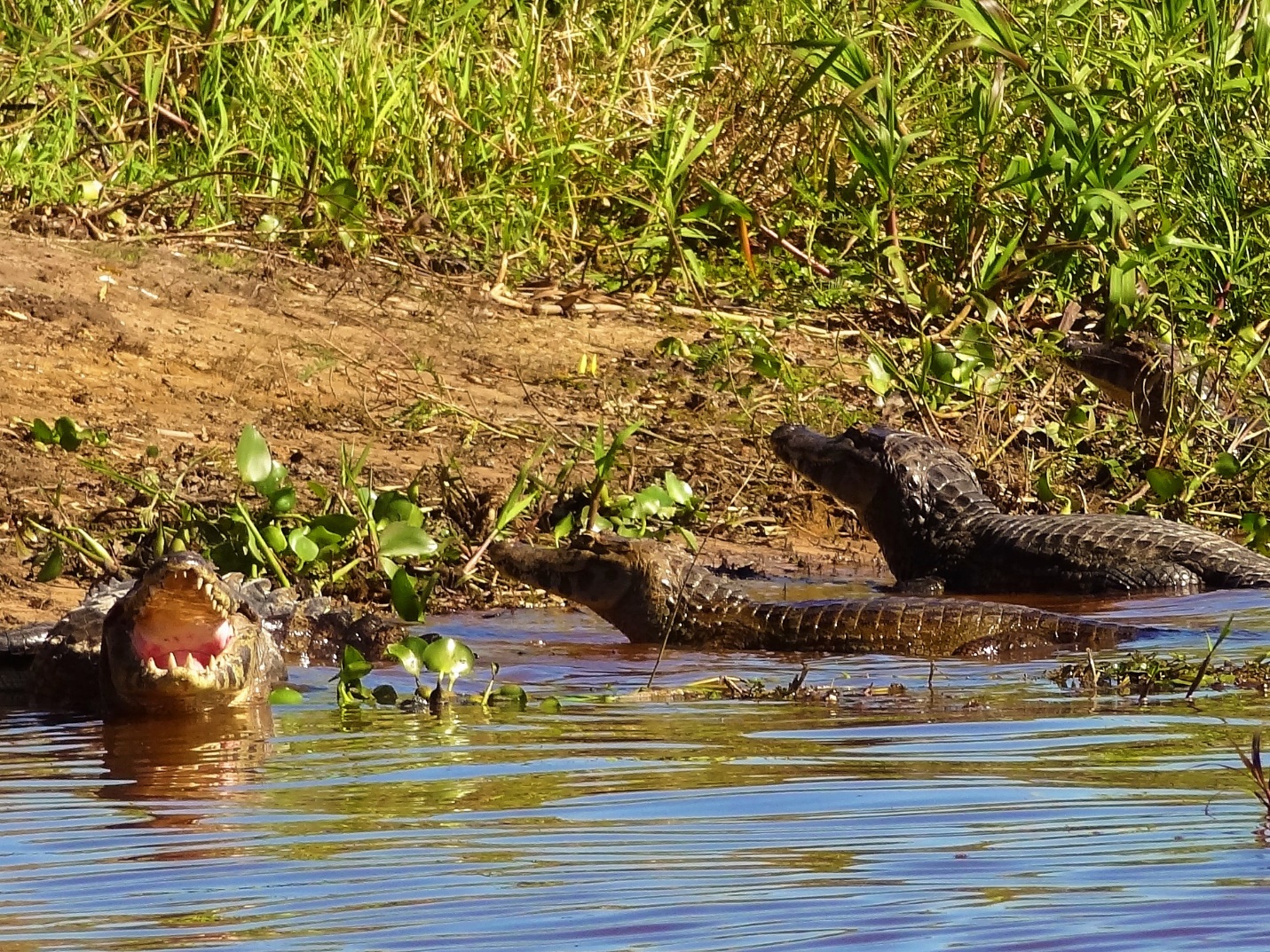 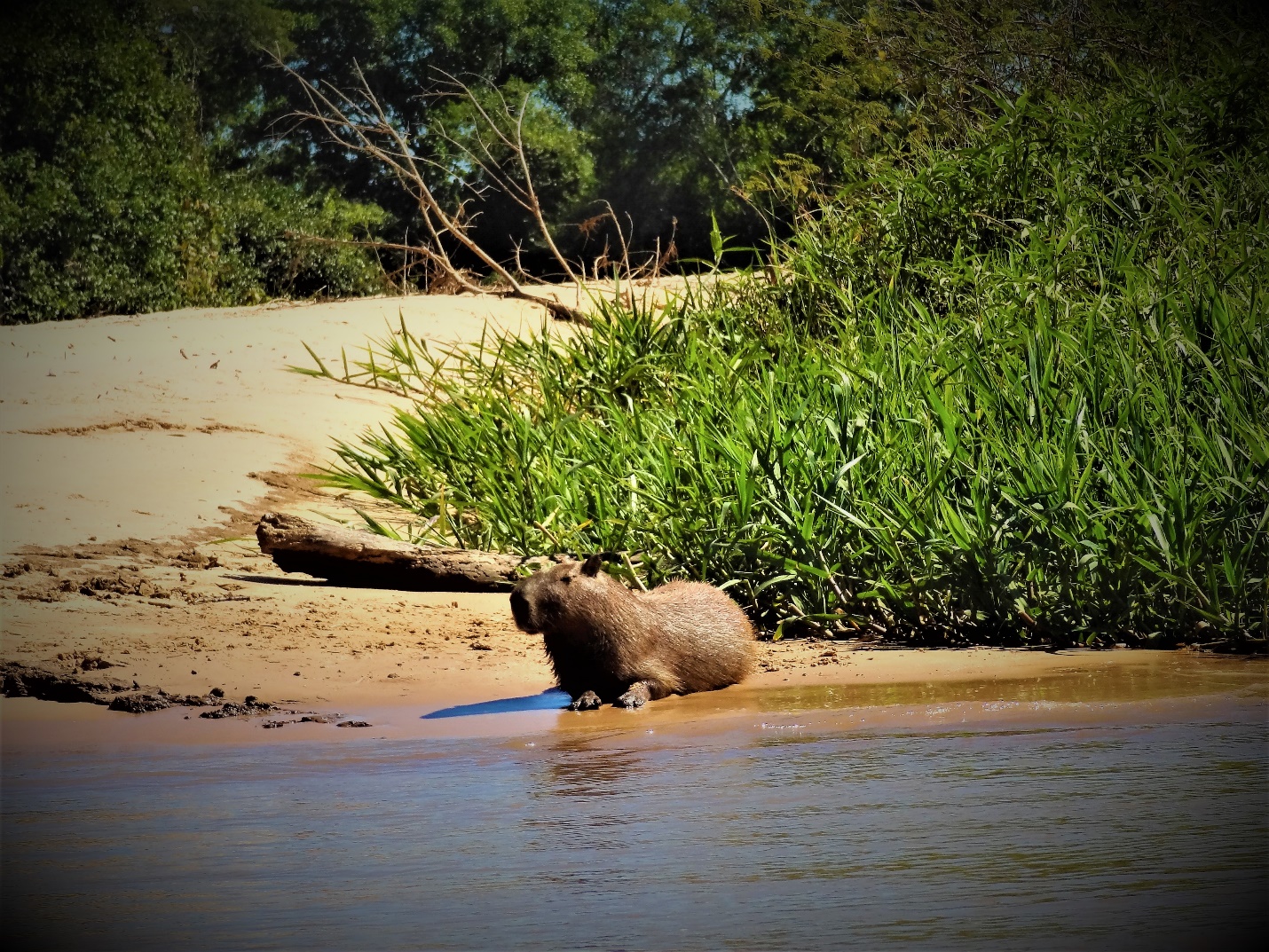 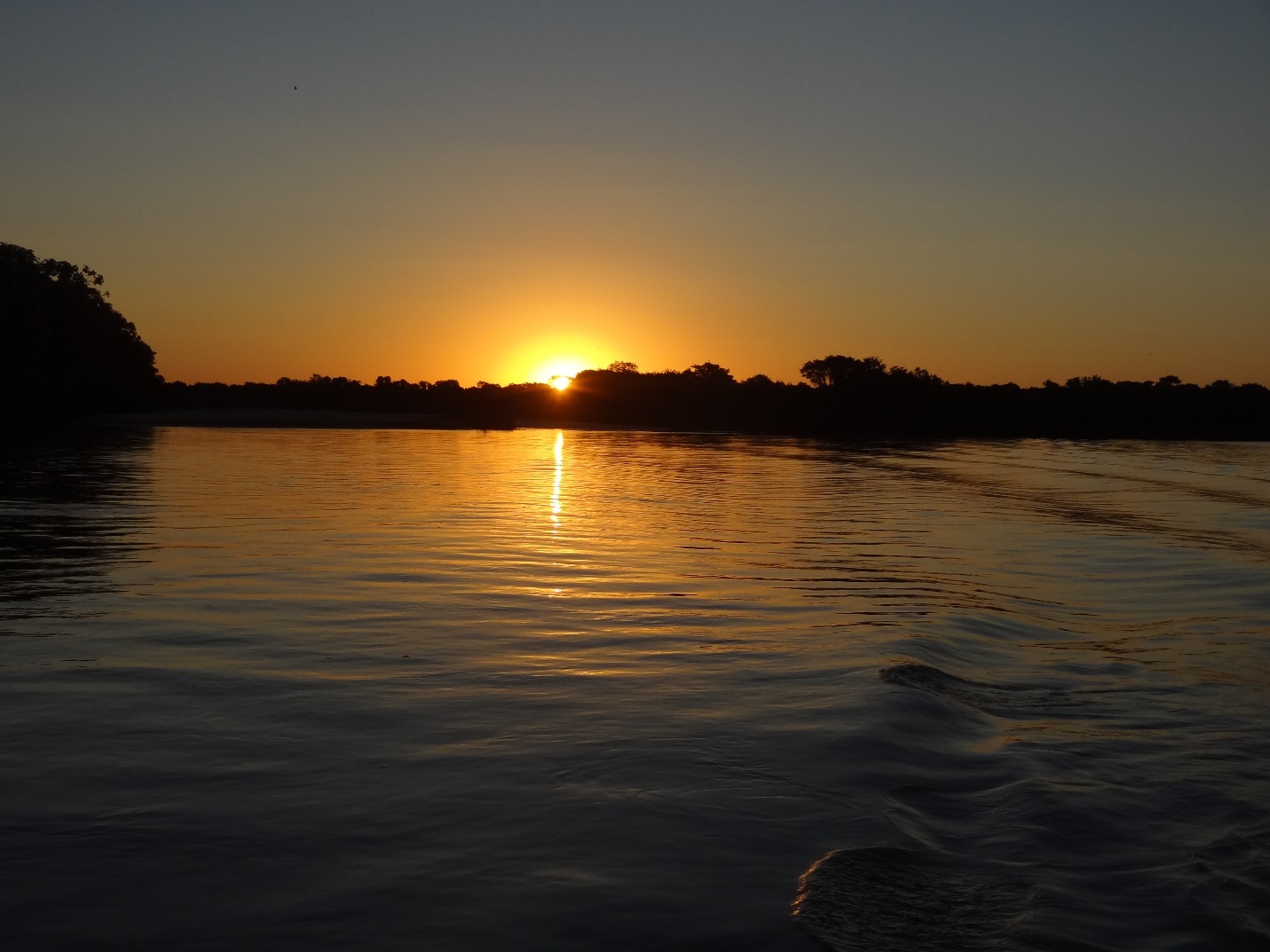