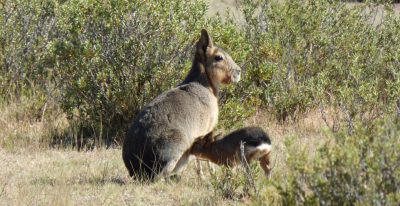 On a recent trip to Argentina, I had the unique opportunity to visit Peninsula Valdés, a less visited site in Northern Patagonia along Argentina’s Atlantic coastline. To arrive one must board a 2 hour direct flight from Buenos Aires to Trelew airport (additionally direct flights connect with El Calafate as well). Trelew is located about a few hours south of Peninsula Valdés, however the transfer is anything but boring.

Once picked up at the airport I was expecting a sleepy ride into Peninsula Valdés, however, unbeknownst to me, the wildlife journey had already begun. Along the highway you can spot several bird species (from turkey vultures to eagles) and a good driver will spot them along the way and give you ample time to capture them on your camera. Once you reach the peninsula, there are all sorts of animals from guanacos to rheas (an ostrich like bird). Having arrived before dinner, I was able to grab my camera and take a walk to the coastline (possible because I was staying at Estancia Rincon Chico, located on the peninsula). Along the way I saw many bird species such as long-tailed meadowlarks and woodpeckers) and once on the coast, elephant seals! It is hard to describe the sound elephant seals make but the opportunity to sit and watch the sunset while hearing only the sound of elephant seals lounging on the coast was priceless.

Heading back to the estancia, a warm dinner awaited my return. The estancia does not give a menu of options but with advance notice of one’s dietary restrictions, they are sure to accommodate any request (even my wife’s gluten free and non-meat diet). Once fed, it was time to prepare for the next day’s activities which included a visit to an elephant seal colony, a whale watching hike, and a visit to a small penguin breeding colony. The penguins located on the peninsula are sure to please as they are cute to watch as they wobble between the sea and their nest. The whales (if you visit during whaling season, June-December) were incredible. To watch a Southern Right Whale quietly breach the water’s surface before blowing water out of its spout was simply a dream.

By the end of the day I was transferred into Puerto Madryn to stay at the Territorio Hotel and receive a glimpse of Northern Patagonia city life, including one of the cities top restaurants: En Mis Fuegos. The Territorio is a full-service hotel with a spa and restaurant onsite and has incredible views over the bay. It was the perfect way to end a stay at the Peninsula before heading on to the next part of the trip – Southern Patagonia. Did I mention there is a direct non-stop flight for that?