Argentina has a long history of wine cultivation, dating back to its colonial roots.  While the production has been present for centuries, it’s within the last couple of decades that vintners have truly focused on quality over quantity.  Now the 5th largest exporter of wine in the world, including many world class producers, Argentina can say that its hard work has paid off.  And while the region surrounding Mendoza, best known for its full bodied, often great value Malbecs, helped secure Argentina’s place among wine enthusiasts, the vines located a few provinces to the north have received far less attention.

Just over an hour and half by plane from Mendoza, and two hours from Buenos Aires, Salta is the jumping off point to many less visited yet historic wineries and haciendas.  Well known among Argentines, the Calchaqui Valley (located southwest of Salta) is where you will find the flowery notes of the Torrontes varietals, which have grown in popularity in the international market in the last few years.  Almost exclusively grown in the northwest of Argentina, the grape’s success has been attributed to the valleys special microclimate, with vineyards ranging in elevations from 5,500 ft to over 10,000 ft above sea level. 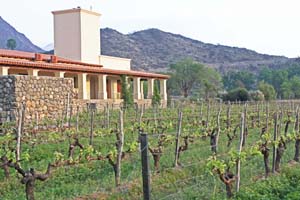 And what better way to pass the afternoon than tasting wines at some of Argentina’s most historic wineries such as the Bodega Colome?!  Recently (2001) purchased by the Hess family, Colome will be celebrating their 180th anniversary this year, which goes to show that while the reputation hasn’t always been there, the wines certainly have.  And if you like wine but don’t want a trip focused solely on wineries, there is great horseback riding, hiking, and exploring through these picturesque gorges, rock formations and natural amphitheaters as well.

If you’re looking for something different, that’s still under the radar of most travelers, the Calchaqui Valley outside of Salta is certainly something to check out.