On a recent trip to the Galapagos Islands, I boarded the beautiful Mary Anne, a First Class 16 passenger sailing vessel, and embarked on an out-of-this-world eight day naturalist cruise.   The experience was truly awe-inspiring.  We anchored in many of the picturesque highlight sites of the archipelago, ventured onto six different islands and had some incredibly close encounters with the precious wildlife of each.  Each unique site, excursion and creature is a story in itself, but for the moment I’d like to focus on one element that really set this trip apart; the vessel itself, the Mary Anne.

Sailing Tours of the Galapagos 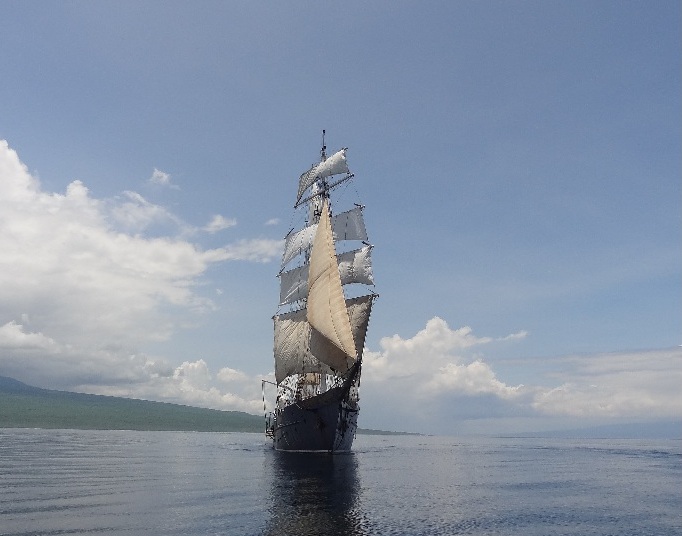 The Mary Anne is a gorgeous vessel.  If you were to stand on the pier in Puerto Ayora, the port town on Santa Cruz Island where dozens of vessels are docked on any given day, and scan the harbor on a day when the Mary Anne happened to be in port, most likely your eyes would glimpse over the other boats and be drawn to the her, and you might find yourself asking, Wow, where did that ship come from?

Indeed, as we motored and sailed from site to site throughout the week, we’d see passengers on other vessels notice us passing by and stop snapping pictures of the jumping manta rays, diving boobies and mating sea turtles that were filling up their memory cards, to instead marvel at and photograph a different kind of wondrous creation; a gracefully crafted sailing vessel that looks like it is something right out of the era of the pirates and adventurers of centuries ago.

The human history of Galapagos is colored by the visits of their famous sailing vessels;  Pirate Capitan Cook’s Bachelor’s Delight, Capitan Pollard’s Essex, the whale ship that inspired Melville’s Moby Dick, and of course, Capitan Fitzroy’s HMS Beagle with a young Darwin onboard.   Stepping onto the Mary Anne is like stepping into that history. 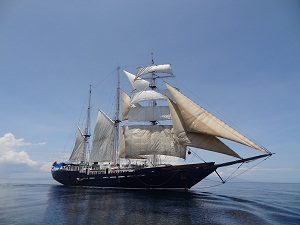 The Mary Anne is a Barquentine style sailing vessel, a style dating back to the 17th century and frequently used at the end of the 19th century.  She is the only 3 mast Barquentine vessel in the Galapagos, and when her sails are unfurled, over 3,000 square feet of canvas catch the Pacific wind.

She is an apparition of a time gone by, the stuff of seafaring fiction, bringing to mind tales of sea rovers and buccaneers out to explore the big blue.

However, the Mary Anne is not a relic of centuries gone by, and fortunately, sailing on her requires no swashbuckling, swapping the deck, waiting for Westerlies, or other pirate era unpleasantries.

In fact, she was built in 1997, and boasts a Scania engine, four generators, and all the comforts of a modern cruise ship.

Each cabin has its own climate controlled air conditioning unit, private bathroom, plenty of outlets to charge your cameras, and space to unwind and rest before the next day’s adventure.

Despite the vessel’s relatively large size (the length including the bowsprit is 216 feet, length on deck is 172 feet, and the beam, or width at widest point, is 25.9 feet) it has a maximum capacity of only 16 passengers, meaning there is plenty of space on deck for each individual, couple, or family on board to spread out, and find their own space to relax, read, or scan the horizon for the next wildlife sighting.

There’s a large outdoor al fresco dining area, as well as an indoor dining area, bar and lounge.   For shore excursions and snorkeling there are two pangas, and there are also four double kayaks (most small vessels have only two or three).  In short, it has everything you need for a safe, comfortable and memorable adventure. 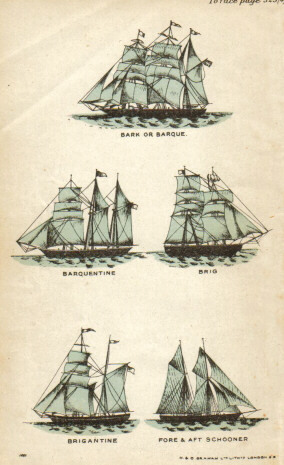 The vessel’s owner and his family’s story inspire further confidence.  The owner is Fiddi Angermeyer, son of Fritz Angermeyer, one of 4 brothers from Hamburg who escaped Nazi Germany in 1935 and settled in the Galapagos.  Fiddi grew up building and fixing up boats in Galapagos with his father, who kept the Steinbeck quote “A man builds the best of himself into a boat – builds many of the unconscious memories of his ancestors” engraved on a plaque in his workshop.

The Angermeyer family has contributed much to transforming the Galapagos from the nearly uninhabitable wilderness it was when they arrived to the well-established tourist destination it is today, and their interesting family history is explored in the book My Father’s Island, by Fiddi’s cousin Johanna Angermeyer, a suggested read for anyone visiting the islands, especially if you’ll be sailing on the Mary Anne.

If you’re overwhelmed by all the different options when it comes to Galapagos vessels, no need to look any further.

Contact us and we’ll hold a cabin for you on the Mary Anne, and you can sail the islands in style.