Three questions arising from One Hundred Years of Solitude

Many years later, as he faced the firing squad, Colonel Aureliano Buendía was to remember that distant afternoon when his father took him to discover ice. 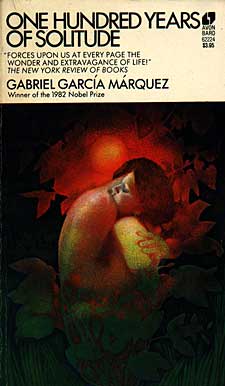 The first line of One Hundred Years of Solitude encapsulates not only a book, but also a nation, a continent and a literary movement. Think about it. The sentence is cyclical, containing both the beginning and the end of the story as well as a hint of what happens in between. It alludes to the revolutions and counter-revolutions which litter South America’s history. And it makes the commonplace fantastical: who ever imagined discovering ice. With its release in 1967, One Hundred Years of Solitude defined Márquez as a writer, Colombia as a country; South America as a continent and Magical Realism as a movement. The Nobel Prize is awarded for an entire life’s work, but Márquez need not have written anything else to merit his inclusion as a laureate.

It is a book which makes you question everything and has been described by William Kennedy (Albany’s version of a magical realist) as “the first piece of literature since the Book of Genesis that should be required reading for the entire human race.” I’ve singled out three of the most obvious questions asked by the book; three questions which should get you thinking about the South America you experience as compared to the South America depicted in the book.

The first question is whether the term ‘magical realism’ is a hollow misnomer or a solid truth. South American reality is so magical that it renders magic almost commonplace. Rain storms do not last weeks or months, but instead “four years 11 months and two days” and the image of someone ascending to heaven while hanging up laundry is fully conjurable, as is a plague – not of locusts, but of insomnia. What is your take on South American reality?

The second question is about Macondo, the town “built on the bank of a river of clear water that ran along a bed of polished stones which were white and enormous like prehistoric eggs,” where the book is set. Is it a thinly-veiled version of Aracataca, the town where Márquez grew up? Or is it every isolated town in South America? Márquez has derided those who try to read too much into the novel, saying that it is “a bit of a joke, full of signals to close friends,” but instead of answering the question I think his remark only adds another layer of confusion to it, and puts us exactly where Márquez wants us: back at square one.

And the third question revolves around the notion of solitude. Macondo – so deep in the jungle that it is cut off from the invention of objects as simple as ice and magnets – is once again representative of the whole of colonial South America which, removed from the rest of the world, became increasingly terrorised by a selfish and cruel plutocracy which was allowed to do what it wanted. Márquez the socialist, obviously inspired by the revolutions in Cuba and elsewhere, condemns Macondo to only 100 years of solitude. The final chapters of the book suggest that the egotism of the land barons is slowly being replaced by love. Might the spell cast over Macondo soon be broken, Márquez asks?

He wrote One Hudred Years in the late 60s. But the military dictatorships of the 70s and 80s made him rethink this hopeful ending, and in his Nobel acceptance speech in 1982 he openly readdressed the notion of solitude. How many years of solitude do you think South America has been condemned to? Is the latest leftist movement a glimmer of hope or is it just another crop of Buendías in a new disguise?

Many have searched, and are still searching for the great American novel. But if you’re looking for the great pan-American novel, you need look no further than Cien años de soledad. Take my advice. While you’re in South America – it doesn’t matter which country – read it. And if you’ve read it before, reread it. As you read and travel around, ask yourself these three questions. Soon you’ll be questioning everything.