With colonial architecture, pre-Inca, ruins and warm weather, Trujillo has a lot to offer all who visit it. Add this to the laidback attitude that goes with being by the beach and the fact that it is far lest touristy than South and Central Peru, and you’ll find little reason not to include the capital of the North in your Peruvian dream holiday. This Trujillo travel guide scratches the surface of what is a wonderful region.

For a city of nearly 1 million people, Trujillo has a decidedly provincial atmosphere. Its wide streets, temperate climate, flat aspect and sedate traffic make it a lovely place to explore on foot. Nowhere in Peru is safe from earthquakes, but Trujillo has not suffered a large quake since the 1700s. This means that it has some of the best-preserved colonial architecture anywhere in the country. Trujillo’s historical buildings have been repainted in their original colors – blues, ochres and maroons abound – giving the city a refreshing dash of panache.

The colonial mansions of Trujillo are famed for their intricate wrought iron window bars and enormous internal patios, and a number of them act as museums and boast original furnishings and ornamentation. There are also myriad colonial churches worth visiting. El Carmen in particular has a delightful collection of paintings, and the mustard-yellow cathedral on the main plaza can’t be missed – especially considering most Vaya Adventures guests stay at the charming Libertador Trujillo with its privileged position on the plaza de armas.

Also well worth a visit is the Museo del Juguete or Toy Museum. It’s owned by a renowned Peruvian artist, and features – among many other exhibits – some pre-Colombian toys. 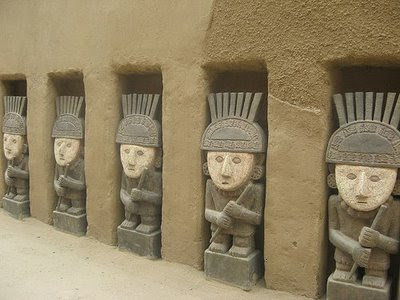 Two of the most important Pre-Incan sites in Peru are a stone’s throw from Trujillo.

Chan Chan is the largest pre-Colombian city in the whole of South America. It was the centre of the Chimú people for some 700 years, and at its peak it was home to 30 000 people. Constructed out of adobe and located on a coastal plain which receives severe flooding, Chan Chan is definitely not in pristine condition. Having said that, I thoroughly enjoyed my fascinating tour around its expansive grounds: certain sections have been reconstructed to give you an idea of what it was like in its prime; the irrigation system was mind-bogglingly advanced; and the beachside location was dramatic and alluring.

The Huacas del Sol y de la Luna (Sun and Moon Pyramids), built by the Moche People, are 700 years older than Chan Chan. The Huaca del Sol is the largest pre-Colombian adobe structure in all of Peru, and although it too has been ravaged by the passage of time, its sheer enormity still makes it a memorable sight. The Huaca de la Luna, on the other hand, is smaller but better preserved – not least because it was largely ignored by the conquistadors who sacked its larger neighbor. Its interior is a labyrinth of intricately decorated rooms containing precious metals, ceramics and the beautiful friezes that the Moche are famous for.

Trujillo isn’t actually on the coast, but the beach town of Huanchaco is only 8 miles away. Huanchaco is famous for its caballitos de totora, the reed boats which have been used by Peruvians for 3000 years. The amazing thing is that they’re still the craft of choice for Huanchaco’s many fishermen, and – on a day when the fish aren’t biting – you’ll probably be able to persuade one of the locals to paddle you out beyond the breakers and surf back in. For a small fee, of course.

Trujillo is one of those rare and wonderful cities where, in 2013, a siesta is still taken. The people are friendly and relaxed, the historical centre of the city is charming and there are some heavyweight Pre-Incan ruins nearby. Hopefully this Trujillo travel guide has encouraged you to add Trujillo to your itinerary – you won’t be disappointed.