Tucker Islets – A Taste of Galapagos in Patagonia

One of my favorite spots in the Galapagos Islands is Punta Vicente Roca.  At the northern end of the Bolivar Channel, a calm passage between the western islands of Isabela and Fernandina, Punta Vicente Roca’s volcanic coastline is home to a plethora of unique and photogenic birds, including Galapagos Penguins, Blue-Footed Boobies, and Flightless Cormorants.  On a recent trip to Galapagos, a panga (a small zodiac boat) took us along the shoreline and right up close to these wonderful animals.  Our naturalist guide Eugenio pointed out and described the different species, which seemed to appear right on cue as if he, the panga driver, and the birds were all in on a choreographed performance timed perfectly for our arrival.

It was quite an experience, and not one that I expected to see rivaled on a recent trip to a very different locale:  the little-known Tucker Islets, a tiny group of islands and rocky outcrops in the Strait of Magellan, between Dawson Island and Tierra del Fuego, nearly 4,000 miles south of the Galapagos, on a Patagonia expedition cruise from Punta Arenas, Chile to Ushuaia, Argentina. 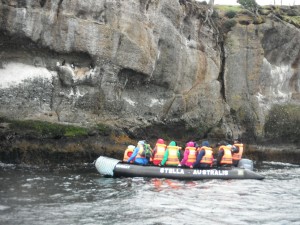 We knew we were in for a treat at the Tucker Islets when, as we arrived, three Austral Dolphins surfaced and began to swim alongside us in a playful manner reminiscent of the Galapagos’ curious sea lions.  On our way to visit a Magellanic Penguin colony, our naturalist guide let us know we’d first be paying a visit to some Rock Cormorants.  As the zodiac rounded a bend we saw a group of these red-faced shags, also known as Magellanic Cormorants, perched on the face of a cliff just above us, using their specially-adapted tails to balance there delicately.

From there it was on to the main attraction, the Magellanic Penguins, who were lounging on the beach waiting for us, and didn’t even flinch as the zodiac driver motored us right up onto the beach where they were hanging out and keeping an eye on the nearby Chilean Skuas, who would have loved to make a meal out of a penguin egg.  Skuas are known for being particularly aggressive birds, and we could see some overhead attacking other airborne birds, trying to steal the food right out of their mouths.

We continued on to a large colony of Imperial Cormorants, or King Shags as they’re also known, who were busy building their nests, before we got an unexpected grand finale from a Flightless Steamer Duck.

Our guide Pato (which is short for Patricio, but also means “duck” in Spanish), had just been telling us that there were two types of Steamer Ducks, or Quetru, in that area: Flightless Steamer Ducks and Flying Steamer Ducks.  He said that the only way he could tell the difference was to wait for one to jump off the rock and see if it would fly, or instead use its tiny wings to row across the top of the water.  Of course, right on cue, the Flightless Steamer Duck jumped onto the water and steamed right past us, frantically rowing itself along the surface of the water and honking comically as it skimmed by, causing everyone in the zodiac to 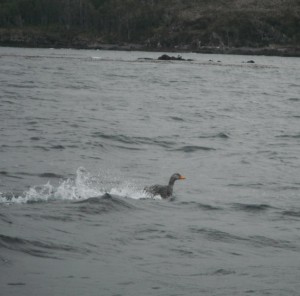 I remembered our naturalist guide from the Galapagos explaining one theory as to why a bird might evolve to lose its ability to fly:  that the loss of this seemingly beneficial ability is explained by the presence of nearby birds that steal other birds’ food midflight, such as the Frigatebirds in Galapagos.  Given the Skuas overhead at the Tucker Islets, Pato concurred that perhaps this duck was better off in the water.

The Galapagos Islands are a world-renowned destination for nature lovers, while the Tucker Islets are a relatively unknown spec of Southern Chilean Patagonia.  The two destinations are extremely different, but the zodiac rides in both sites deliver up-close encounters with unique wildlife, and both offer truly unforgettable nature experiences.