Trips to Uruguay from Buenos Aires

Uruguay, with its pre-Hispanic name, sounds a lot more exotic than it really is. Many people imagine it to be buried deep within the Amazon, but it is actually right on Buenos Aires’ doorstep. The entire country, wedged between its huge neighbors Argentina and Brazil, fits on to a coastal plain whose highest point is barely 1000ft. As you’d expect, the beaches are the country’s biggest attraction (Punta del Este, a luxury resort town halfway up the coastline is packed with rich Argentines and Brazilians every summer) but the people of Uruguay and their laidback old world lifestyle aren’t far behind.

An excellent ferry service means that Colonia del Sacramento can easily be visited as a day trip (the trip takes an hour each way) although it’s so charming you’ll probably wish you’d stayed over. The capital, Montevideo, is a 3-hour ferry ride from BA so it’s probably better visited as an overnight side-trip. Or you could do a roundtrip which takes in both destinations – all of which can be booked on the site above. 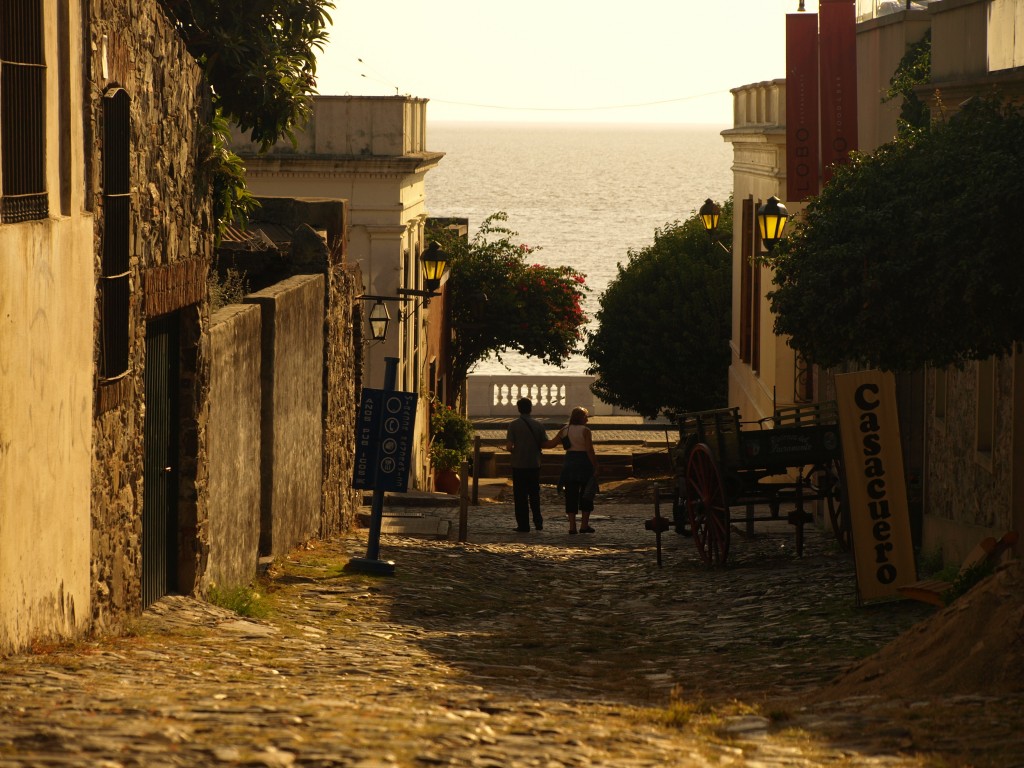 Its serious overdose of charm coupled with its proximity to Buenos Aires make Colonia one of the biggest attractions in Uruguay. Founded by the Portuguese in 1680, the original barrio histórico is chocolate-box-cute, laying on winding cobbled streets, flaking plaster, and expansive views over water that make you feel like you’re in Havana.

Except this is a town that, including the newly constructed outskirts, has a total population of around 25 000. You step off the ferry onto Calle Florida, and are immediately transported back in time – there is no need for taxis or maps, you can just get on with being a tourist. And there’s no denying it is touristy: restaurants (some of which are excellent), cafes, burger chains and curio stores abound.

Although there are museums (one ticket gets you access to all eight), the first priority on any visitor’s list should be to explore the town on foot. It’s small enough to not worry about getting lost and flat as a pancake so you won’t even feel out of breath. If you feel like a bit of a gradient, though, the historic lighthouse is the town’s most notable landmark and you can climb to the top for a few pesos – the views are well worth the cost.

On weekends, and during Argentine holidays, Colonia does get very busy so try to avoid these times. Also, it’s well worth spending a night if you can: once the last ferry leaves, the town gets a lot quieter and loses any ‘package tour’ feel it may have had.

Montevideo is one of the most low-key capitals you’ll ever visit, a fitting standard-bearer for an unassuming country with ‘the world’s poorest president’. It’s a stately place, and much like I imagine the grander parts of Buenos Aires (Recoleta and Palermo) to have been fifty-odd years ago.

That’s not to say it’s a carbon copy of its much more illustrious neighbor, or that it’s dull in its slowness. Montevideo has its own charm. It claims to be the original birthplace of tango, and although this is disputable there’s no denying that it has tango in its foundations.

More interesting, for me, is the candombe music of Montevideo: candombe was the music of African slaves (there are currently about 200 000 Uruguayans of African extraction), and it played a large role in the genesis of tango. Candombe used also to be performed in Argentina, but the demise of the Afro-Argentine population in the 19th century meant that Uruguay is now its only home. A candombe group consists of drummers (some of the bigger groups have as many as 100) and dancers, and the best time to see them in action is during carnival, when all 90 groups in Uruguay perform together.

How you spend your time in Montevideo will depend on your tastes, but there really is something for everyone. There are museums, parks, and a pleasant beachfront. There’s fine dining too (don’t miss the Mercado del Puerto) and a hotly-contested football league…all on a smaller, more accessible scale than anything Buenos Aires has to offer.