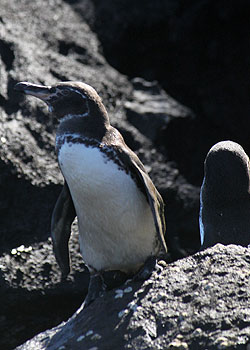 As a Board Member of the International Galapagos Tour Operators Association (IGTOA), I recently attended a conference in Guayaquil entitled “Defining and Achieving Sustainable Tourism in the Galapagos.”  Attendees included the Executive Director of the Charles Darwin Foundation and representatives of various organizations working to preserve the Galapagos, including the World Wildlife Foundation and WildAid.

Through the conference and my participation on the Board of IGTOA, I’ve had the opportunity to try and deepen my knowledge of the complicated issues at stake in the Galapagos.  Promoting tourism in this special place comes with a serious responsibility not to do things that are against the interests of the islands simply to make more money. There have been increasing numbers of journalists and environmental organizations ringing the alarm bell about what is going on in the Galapagos and the threats that it faces due to uncontrolled tourism growth. The big question is what solution will actually work to protect the islands for future generations.

From everything I’ve learned so far, I’ve come to the conclusion that a cap on the total number of tourists permitted into the Galapagos every year is the only way to preserve the Islands for the long term.  This type of cap has been instituted in places like Machu Picchu and on the Inca Trail, for the long term preservation of those places.  The reason a cap is needed is straightforward:  the economic pressures for continued tourism growth in the Galapagos are too strong to be controlled any other way. (The opinions I express here are my own and not necessarily those of IGTOA or any of its other members.)

Tourism and Population Growth in the Galapagos Since 1990

The history of what has happened in the Galapagos since 1990 supports the conclusion that a cap is the only way to prevent excessive development in the Galapagos.  The single biggest issue in terms of conservation in the Galapagos is that, due to the growth in tourism, the local population has skyrocketed, from under 10,000 people in 1990 to over 25,000 today, with several thousand others living there part time.  During the same period, the number of tourists visiting the islands went from about 40,000 in 1990 to about 200,000 estimated in 2012.

The Galapagos were the fastest growing province in Ecuador for many years.  Mainland Ecuadorians were understandably attracted to move there, particularly to Puerto Ayora on Santa Cruz Island and other towns, due to the explosive growth in tourism that was taking place.  There was a lot of opportunity to get involved in land based tourism:  hotels, restaurants, tourist shops, and all the services and industries that go along to support these businesses and the people that work in them when tourism is growing rapidly.  Along with this growth in infrastructure comes cargo ships, roads, cars, and trucks. 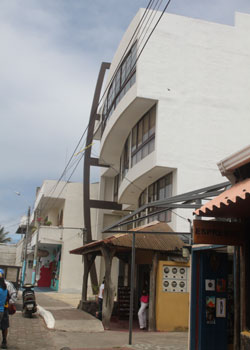 Traditional Boat-Based Tourism in the Galapagos

It’s important to take a step back and remember that tourism in the Galapagos has traditionally taken place via live-aboard cruises on small yachts and ships, with very few hotels and very limited land-based tourism.  The smaller Galapagos vessels mostly range from 12 to 20 passengers.  There are also some “mid-sized” vessels, from 32 to 48 passengers, and a handful of 100 passenger ships.

Hopefully, the total number of berths won’t be increased at any point and the itineraries won’t be shortened, and boat-based tourism will remain what it currently is:  limited and controlled, and focused on low impact, nature-based cruises on environmentally responsible small vessels.  Another positive trend in boat-based tours has been the new 15 day itineraries created by the Galapagos National Park Service.  By having no boat visit the same spot more than once in any 15 day period, these new itineraries promote longer stays in the Islands and thereby also help reduce the total potential number of travelers.  (All of the vessels’ itineraries are set by the Galapagos National Park Service and are highly regulated.)

The Growth in Land-Based/Hotel Tourism in the Galapagos 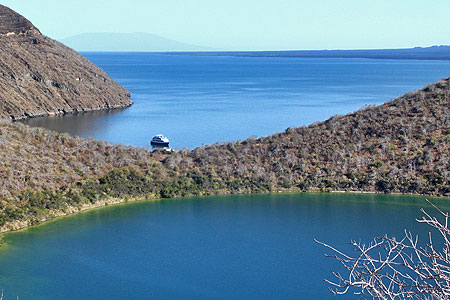 I fully understand that many Ecuadorians want to benefit economically from the appeal of the Galapagos as a tourist destination.  I lived in Ecuador for two years and worked in areas suffering severe economic hardship.  I know the importance of economic opportunity to working Ecuadorians.  However, millions of Ecuadorians and other people around the world don’t want to see the Galapagos Islands overdeveloped or put at risk simply for the sake of making it a larger and larger tourist destination.

One thing Ecuador could do is significantly raise the Park Fees that are charged to travelers.  This would not only raise more money for the the country so it can increase the benefits it derives from this national treasure, but it would be another positive step towards reducing the growth in the number of visitors, as some people would decide not to pay them.  However, this would only slow growth rather than eventually stop it.

Why Tourism Growth Is a Threat to the Galapagos

The threat to the islands is real:  with more visitors and more population comes the increase in dangerous introduced species that inevitably come along with them.  These invasive and often extremely destructive introduced species represent the biggest threat to the islands’ fragile wildlife.  The wildlife in the Galapagos is particularly vulnerable for the very reason that for so long it has been completely isolated from these species.  From introduced fly species that destroy finch eggs to the hyper-aggressive blackberry plant (among many others), invasive species that originated with human visitors are already causing tremendous damage in the islands and threatening with extinction endemic Galapagos species.

It surely can’t be the case that never-ending economic growth becomes the basis for the long-term development of the Galapagos or management of tourism arrivals to the Islands.  This fragile environment cannot support never-ending growth (more roads, buildings, infrastructure, stores, restaurants, tourist shops, etc.).  At some point reasonable people can surely agree that the growth has to stop.  Many would argue that we’ve already passed the point where it should stop, with a local population pushing 30,000 and growing.

What would change with a cap on tourist arrivals is that the intense pressure for more immigration to the islands from the mainland for economic reasons would eventually be stopped, easing the long term threat to the islands and having conservation rather than economic growth dictate the ultimate population levels.  Delaying a cap will likely only make it harder and harder to ever enact, because the economic forces opposed to it will only get bigger and bigger.  A “pro-growth” agenda is already being pushed by political forces in the Galapagos, and that will only grow as more and more people arrive to the islands.

A cap on the total number of tourist arrivals would mean that only a specified number of people could visit the islands every year.  The details of such a cap could be worked out.  There could be one limit for tourists doing live-aboard cruises, and another limit for those doing land-based tours.  In any event, what is clear is that the time to seriously discuss a cap has arrived.  Without a cap on tourist arrivals, the pressures for economic growth in the Galapagos could very well be too strong to control, putting too much pressure on the fragile ecosystems of this long-isolated archipelago.

Form your own opinion on this important issue and join the discussion.  Some sources and commentary include:

The Galapagos Conservancy, https://www.galapagos.org/
Epler Report on Tourism, the Economy, Population Growth, and Conservation in Galapagos (2007), from the Charles Darwin Foundation, https://www.galapagos.org/wp-content/uploads/2012/01/TourismReport1.pdf  (This is one of the most comprehensive documents on the issue that exists)
The Guardian (UK Newspaper), Galapagos Menaced by Tourist Invasion, https://www.guardian.co.uk/world/2012/jun/10/galapagos-islands-conservation-crisis-exhibition (by a journalist who recently visited the Galapagos)