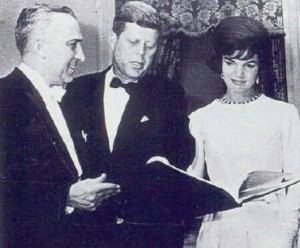 My Grandfather with JFK and Jacqueline Kennedy

When I was young, before I or anyone in my immediate family had been to South America, I remember hearing that my maternal grandfather, Howard Mitchell, had visited South America several times.  Originally from Iowa, he had left home at the age of 16 to study music at the Peabody Institute in Baltimore.  An accomplished cellist, he went on to become conductor of the National Symphony Orchestra, with the longest tenure (1950-1969) of any conductor in the NSO’s history. My grandfather passed away in 1988 when I was 19 years old, four years before I made my first trip to South America.  I remember him as a larger than life figure: opinionated, hilarious, a great storyteller who loved taking us fishing and playing Michigan Rummy during summer vacations at Lake Champlain in Vermont. I also remember him smoking cigars, playing golf, and drinking White Horse whiskey.

Sadly, I never had the occasion to speak to this remarkable person about his experiences in South America, and my family seems to have very little to go on other than some anecdotes about what he did down there. The kids (my mom and her 4 younger siblings) didn’t go on the trips. My grandmother went only once, maybe because she didn’t love it quite like he did, or maybe because someone had to stay home to take care of their five children.

In any event, Pop (as we all called him) spent many months in South America with the orchestra over the course of several northern summers, performing concerts and doing outreach programs to help expand appreciation of classical music. In 1959 the orchestra did its longest trip, a marathon 3-month tour visiting 19 different countries throughout Latin America, performing 68 concerts as part of President Eisenhower’s Program for Cultural Presentations.

There doesn’t seem to be much from his travels in terms of artifacts, but there are at least a few paintings and prints by South American artists that he acquired along the way.

One is a painting I have on my wall at home by the Venezuelan artist Bárbaro de Rivas, which my mom gave to me at one point when she was moving.  I’m not sure most people would consider it beautiful, but it’s probably one of the material things I value most in the world. With the help of the internet I have been able to track down some information about the artist, who was a colorful and unique figure in Venezuelan art history.

My aunt has two works by Brazilian artist Emiliano di Cavalcanti.  He is perhaps the most renowned of the group of artists represented in this little collection. Curious about who he was, I made out his name at the bottom of one work and googled it, to discover that he was one of the artists who first brought modernism to Brazil in the early 1920s. Thanks Internet! 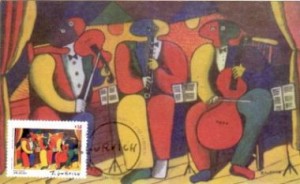 My aunt also has an oil painting done in 1968 by the Uruguayan artist Jose Gurvich, entitled Three Musicians. She shared the story of how the artist came backstage and personally gave this painting to my grandfather to express his gratitude for bringing the National Symphony to Uruguay.  A little research on the artist has turned up that there is a Jose Gurvich Museum in Montevideo, and that a similar Gurvich painting, also called Three Musicians and done in 1968, appeared on a Uruguayan stamp in 2007. Thank you again, Internet!

There may be some other artifacts from my grandfather’s South American travels scattered out among the rest of the family, hopefully not lost in attics or destined for garage sales. I wish I’d had the chance to speak to him about these trips, but at least the things that remain and the stories I’ve heard have opened the window a bit onto the part of his life spent in this region that has become so central to my own.