Peru, A Story of Growth

My first trip to Peru in 2005 consisted of a 2 ½ week tour. Each day kicked off with a pleasant stroll through small towns or into surrounding mountains, following roads and trails through The Sacred Valley. I’ve since returned several times, taking in many more parts of this beautiful country, from Chiclayo to Chachapoyas to the ruins of Choquequirao. My subsequent visits have expanded my geographical knowledge of Peru, and also allowed me to observe the development of Peru’s economy and governance over the past decade.

Throughout the 80’s and 90’s Peru was engulfed in one of the deadliest internal conflicts since European Colonization, with many innocent villagers caught in the middle. However, Peru has emerged from this period dramatically changed, anchored by a seamless transfer of power through three democratically elected presidents since 2001. This has enabled the country to implement new policies resulting in significant and stable economic growth.

Since 2002, Peru’s economy has almost doubled in size, growing at an average rate of approximately 6.5% per year. And they’ve done this while reducing the gross public debt-to-GDP, which is now less than 20% of GDP (the US’ is around 100%). Foreign investment in mining and other large infrastructure projects have provided much of this growth, with commodity exports boosting the country’s tax revenues. 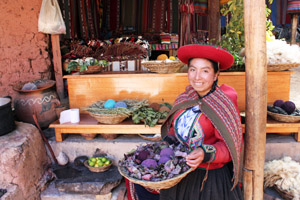 Flush with money, the government has been able to spend record levels on local infrastructure and social programs, helping the local economies grow and increasing demand by local consumers. This has helped reduce the poverty rate of nearly 50% in 2005 to below 28% in 2011. This is all good news for Peru, though there is still a lot to accomplish. Looking forward, as Peru’s economy continues to grow so does demand for professional and managerial positions. To fill these jobs the government must do more to strengthen the educational system, and it is doing just that. With increased tax incentives for worker training programs, better training for teachers, and new evaluation processes for students and teachers alike, the effort is underway. This is a long-term commitment and I look forward to visiting Peru in the years to come and seeing its continued growth.