Returning from the Buenos Aires of Europe 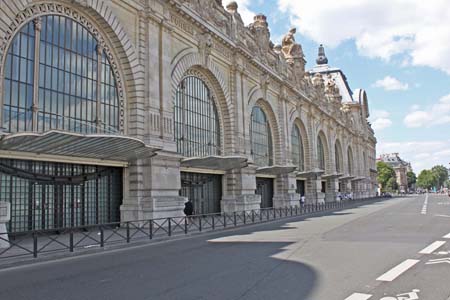 I just returned from a week in Paris and it’s interesting to compare notes on this famed metropolis and it’s Argentinian counterpart (sometimes referred to as the Paris of South America).  First off, what a beautiful city Paris is!  It’s difficult for any city to compare architecturally to the grandeur of Paris, but Buenos Aires does share the Parisian penchant for beautiful wide boulevards, dramatic statues, and Belle Époque architecture.  Buenos Aires also offers some similar landmarks, such as the Cemetario Recoleta (Buenos Aires; resting place of Eva Peron), and the Pere Lachaise (Paris; resting place of Frederic Chopin).  These are great places when looking to slow down the pace of the urban hustle outside their walls. 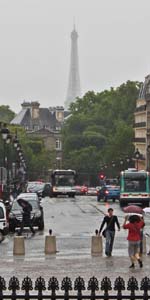 Eiffel Tower by way of the Pantheon

Both cities also contain some great museums, housing paintings from their country’s many accomplished artists.  Paris is certainly well established in this regard, with the Louvre, the Musee D’Orsay, and L’Orangerie, to name just a few.  And while its museums are perhaps not as famous, Buenos Aires does boast some small gems of its own, including the Museo de Arte Latinoarmericano de Buenos Aires (MALBA), and the recently opened Coleccion de Arte Amalia La Croze de Fortabat.  If you are looking to view some of Argentina’s most accomplished artists you won’t want to miss this latter museum, which is divided into seven galleries.  Oh, and there is also a collection of international art on display in one of the seven galleries, which includes some Rodin sculptures for those looking for a bit of France while exploring Buenos Aires.  But it isn’t just what’s within this museum, it’s the building itself and its location in the Puerto Madero which add to the experience.  Designed by architect Rafael Vinoly of Uruguay, this modernist building is surrounded by beautiful paseos (walk ways) and some of Buenos Aires’ best restaurants, like Cabanas las Lilas.

The best way to enjoy both cities is to simply mimic the lifestyle of the locals.  Walk from neighborhood to neighborhood, barrio to barrio, arrondissement to arrondissement.  Enjoy the outdoor cafes that abound (don’t these people work for a living?) and be sure to sample the local cuisine.  A shot of espresso will provide a quick pick me up if needed, or if the feet are looking for a longer rest, relax with a glass of vino, “vin”.   And not to worry, it seems in both Paris and Buenos Aires there’s never a bad time for a glass of your favorite varietal.

There is much to see, appreciate and compare in both locales, which certainly requires further exploration on my part.  I will spend the next few weeks toiling over good ways to propose this to my superior, in hopes of finding myself watching the world go by from the streets of Buenos Aires in the near future… And this may need to take place around a Bruce Springsteen concert, although it may be tough to beat the Boss on the 4th of July in Paris.