Nothing says ‘vacation’ more loudly or clearly than sipping on a cocktail in your swimsuit or your bathrobe. While Argentina and Chile might be most famous for their wines, and Peru and Brazil for their coffee, try these three Latin American cocktails and you’ll realize that each country has something to offer on the cocktail front.

Both pisco (the grape bandy which is the base for this cocktail) and pisco sours are the subject of a major international dispute. Peru and Chile claim both as their own, but the great thing is that the brandy and the cocktail differ so greatly in each country that there’s a case to be made for viewing them as entirely different things.

First let’s look at the differences in the main ingredient. Peruvian pisco is always bottled at distillation strength and is never wooded, while Chilean pisco is almost always aged in oak barrels and is often watered down to 40% alcohol. Obviously these differences are more obvious when you’re drinking neat pisco, but they definitely influence the cocktail too.

Now let’s move on to the cocktail. In both countries pisco sours contain pisco, sugar (either granulated or syrup), lemon or lime juice and ice. In Peru egg white and bitters are always added while in Chile these additions are optional. Personally I prefer the Peruvian version, as the egg white makes for a smoother drink, but both variants are cool and refreshing. Whatever you do, don’t buy the ready-made version. Get a barman in Lima or Santiago to make you one from scratch. 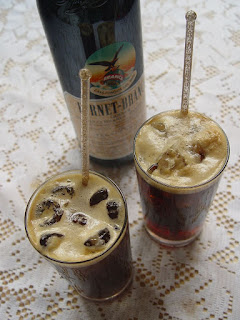 Fernet Branca is an Italian digestif, a herby (27 different herbs, in fact) aromatic drink akin to amaretto which is traditionally served after a meal. It was developed by Dr Branca and his fictitious Swedish colleague Dr Fernet, and as such it is supposed to have medicinal qualities.

That’s all very well in Italy, but in Argentina it is a party drink which is mixed with Coke and drunk in copious quantities – 25 million liters of Fernet are sold in Argentina every year. To prepare it fill a glass with ice and pour a tot or two of Fernet over the ice. Then add the Coke slowly so that the foam turns a treacly brown. I’d describe it as an acquired taste, but, who knows…you may love it.

Fernet also make a mint-flavored variation on the theme, Fernet Menta – in Argentina this is usually mixed with Sprite or Seven Up and is considered a ‘girly drink’.

If you haven’t had a caipirinha on Copacabana beach, you haven’t lived. A very simple cocktail consisting of muddled lime wedges, sugar, crushed ice and cachaça, it is the perfect answer to the sweltering heat of tropical Brazil.

Cachaça, like rum, is a distilled spirit made from sugar cane, but while rum uses molasses as its base, cachaça uses fresh sugarcane juice (a delicious drink in its own right). Not all cachaças are created equal and the quality of your caipirinha will depend heavily on the quality of the spirits used.

These days there are loads of variations on the caipirinha theme: passion fruit, kiwi fruit and strawberries are often substituted for lime, and caipisake (which uses sake as its base) is also gaining in popularity. Fun though these may all be, a good old-fashioned caipirinha still gets my vote. Buy a decent bottle of cachaca and enjoy them around the pool once your Brazilian dream vacation is over…

Travel would be pointless if we didn’t immerse ourselves in the cultures we travel to. What better way to do this than by drinking what the locals drink? Tell me – which of these three Latin American cocktails is your favorite? Or better still, suggest another…