The Unconquered: In Search of the Amazon’s Last Uncontacted Tribes

Traveling back and forth between North America and South America sometimes means falling asleep in winter and waking up in summer, on long overnight flights from one hemisphere to the other.   Before one such recent flight, I picked up a copy of Scott Wallace’s paperback release, The Unconquered: In Search of the Amazon’s Last Uncontacted Tribes.   Wallace’s first-hand account of a wild expedition through the depths of the Brazilian Amazon kept me up and turning pages all the way from North American winter in New York to South American summer in Santiago. 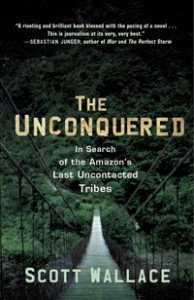 The nonfiction narrative reads like a novel, and profiles Sydney Possuelo, head of Brazil‘s Department of Isolated Indians, who leads a 34 man team through the Vale do Javari Indigenous Reserve, a remote, wild territory, with no roads or air strips, in Western Brazil, near the borders of Peru and Colombia.  Their journey into the land of the flecheiros, or “People of the Arrow,” an uncontacted indigenous tribe, becomes a fascinating story of survival in the harsh conditions of the virgin Amazon Rainforest.

The paradoxical mission of the expedition is to explore the land of the remote tribe and document their presence without making contact with them, thus continuing to protect them from the diseases and exploitation that would inevitably accompany contact with outsiders.  The fact that such tribes still exist in this millennium is remarkable, and the idea that a first contact with society is possible throughout the book give it the feel of an adventure diary that could have been written in 1492 or any time since.  Indeed, the author compares his life, going back and forth from Manhattan to the remote Amazon, as perhaps the closest thing possible to time travel.

The foray into the land, culture and psyche of uncontacted and recently contacted tribes of the Amazon opens the imagination to just how incredibly different reality is between remote corners of the Americas.  One particular passage struck me quite serendipitously as my Santiago bound flight sliced across the South American continent.  Deep in the jungle, the author hears a commercial airliner far overhead and ponders what the remote tribes must think upon seeing and hearing these massive birds up in the sky.  Sitting around their campfire, he puts the question to the group, and one of the native scouts from a recently contacted tribe called the Matis responds.

“Before, Matis thought the big airplanes were our dead ancestors – xokeke,” he said. He pointed straight up, indicating the space far beyond the treetops.  “We saw them pass waaaaaaaay overhead.  And we said, ‘There go our ancient ones.'”