Did the Patagonian Indians save the Magellan expedition from self-destruction?

On March 31, 1520, Magellan’s Armada de Molucca, a fleet of five ships commissioned by the Spanish crown to seek a Western route to the Spice Islands, pulled into a natural harbor dubbed Port St. Julian, on the far southern coast of what is now Argentina. Their search for the Strait had so far proven fruitless, and they were now further south than any Europeans had ever reached in the Americas, with no guarantee that the rumored passageway even existed or could ever be found. As the Southern Hemisphere’s season turned toward winter, the men were forced to shore up to wait out the coming months’ rough seas in bitter cold and little daylight. The expedition appeared to be doomed.

Magellan’s men were placed on short rations, and murmurs of mutiny turned into outright rebellion, with several of the ships’ captains plotting to overtake Magellan, kill him, and return to Spain rather than continue on what they now viewed to be a suicidal fool’s errand. Magellan quelled the would-be coup with all the brutality of the Inquisition, torturing, drawing and quartering the would-be mutineers before placing their heads on pikes on the shore as a reminder to the remaining crew of his ultimate authority.

Things went from brutal to worse when one of the five ships, the Santiago, shipwrecked against the rocks during a reconnaissance mission, losing all the provisions on board. The men managed to abandon ship in time to survive and make their way over land and down river back to Port St. Julian, which by this point had taken on the aspect of an outdoor prison camp: members of the crew who had been sentenced to hard labor for their complicity in the mutiny plot were busy refitting and scrubbing down the four remaining ships. During these renovations, it was discovered that the fleet had been scammed by the merchants who’d outfitted the bold expedition back in Seville; they had about a third of the provisions they thought they had, far less than they thought they’d need to get the Spice Islands, and maybe not even enough to get them home should they turn back. The crew’s low morale plummeted still further, under the gaze of their former comrades’ severed heads on pikes on the shore.

Suddenly, into this bleak scene of European self-destruction leaps the most unlikely of
characters: a singing, dancing, naked “giant.” In the words of Antonio Pigafetta, the expedition’s Venetian chronicler and one of the few eventual survivors of the expedition:

We passed two months in that place without seeing anyone. One day we suddenly saw a naked man of giant stature on the shore of the port, dancing, singing, and throwing dust on his head. The captain-general sent one of our men to the giant so that he might perform the same actions as a sign of peace. Having done that, the man led the giant to an islet into the presence of the captain-general. When the giant was in the captain-general’s and our presence, he marveled greatly, and made signs with one finger raised upward, believing that we had come from the sky.

This is the first written account of an indigenous person in a region Magellan would soon dub Patagonia, and the “giant” on the shore was likely a member of what is now known as the Tehuelche tribe. We do not know with which finger the unnamed “giant” gestured towards the sky or what he meant by the gesture, but the encounter would prove to be more of a godsend to the Europeans than to the locals. 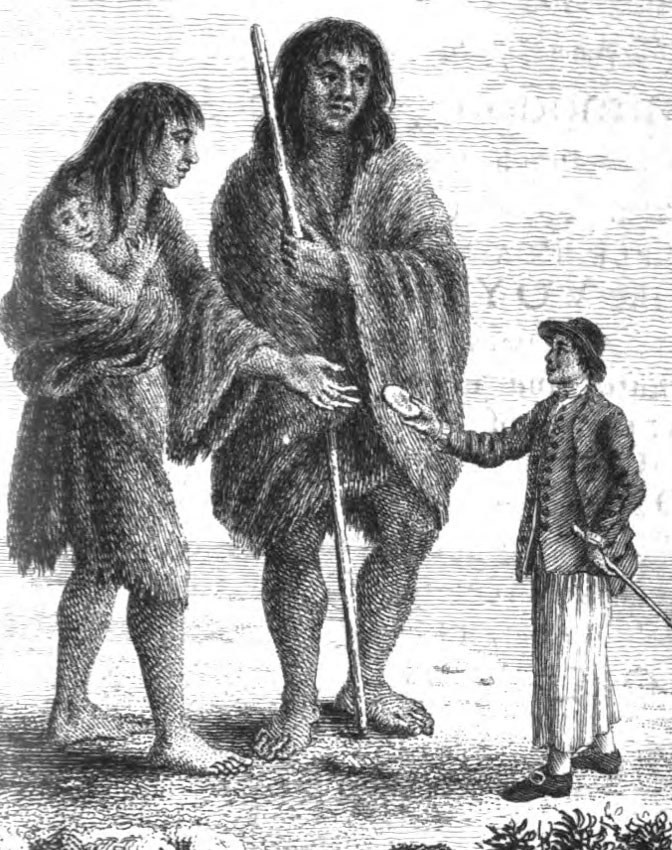 The “giants” of Patagonia

Most descriptions of Magellan’s expedition treat this encounter as a curiosity or a side note, focusing on how tall these “giants” really were and how their big feet were likely the inspiration for the name Patagonia – which can be roughly translated to mean “land of the big footed ones” – still used today to describe this vast region of southern Argentina and Chile. What most gloss over, however, is the possibility that it was this dancing “giant” and the subsequent encounters with the Tehuelches that allowed the bedraggled Europeans to survive the winter and continue on what would become one of humanity’s most historic journeys; the first circumnavigation of the globe.

An argument could be made that the mere presence of the indigenous people in this remote outpost served as just enough of a distraction to stop the Europeans from literally tearing each other to pieces (another mutiny plot had just been uncovered and put down, shortly before the “giant’s” arrival), and indeed accounts of the expedition abruptly jump from complaints of decreased rations, infighting and the torture of mutineers to curiosity and fascination once the Tehuelche appear. But there is evidence that the Tehuelche’s assistance was much more tangible than just a distraction.

The Tehuelche introduced the Europeans to the primary resource that had allowed the natives to thrive in these brutal climes for millennia, what Pigafetta described as an animal “with a head and ears as large as those of a mule, a neck and body like those of a camel, the legs of a deer, and the tail of a horse, like which it neighs, and that land has very many of them.” In short: the guanaco.

Like the buffalo to the Plains Indians of North America, the guanaco (similar to a llama) was more than just another food source to the Pampas Indians of Patagonia. They ate the meat, used the fur for clothing and shoes, the skins for their huts, the intestines for their bows; nothing went to waste. And not only did the Tehuelche share some of their guanacos with the Europeans, they taught the visitors how to hunt them.

They led four of those young animals [guanacos], fastened with a leash and a cord. When those people wish to catch some of those animals, they tie one of these young ones to a thornbush. Thereupon, the large ones come to play with the little ones; and those people kill them with their arrows from their place of concealment. Our men led eighteen of those people, counting men and women, to the ships, and they were distributed on the two sides of the port so that they might catch some of the said animals.

Soon the Europeans, rather than plotting mutinies, were feasting on guanaco meat and using the wool to keep warm through the winter. We don’t know exactly how much of this meat they took on, or how many of the animals they stowed for later consumption, but we do know they bestowed gifts upon the Tehuelches to keep bringing more, and participated in at least one hunt with them. If the addition of the guanacos to the European diet gave them even a marginal increase in energy and endurance in the journey ahead, that could very well have been the difference between total failure and their ultimate success in making it to the Spice Islands and back to Spain. In the end it was only one ship and 18 men (Magellan not among them, having been hacked to pieces while battling islanders in the Philippines along the way) of the original 270 men who would complete the circumnavigation, many of the others dying of starvation and malnutrition along the way.

Can we go as far as to say that the Patagonian “giants” are partially responsible for one of the greatest feats of exploration of all time, one that redefined man’s understanding of the globe and the immensity of the planet earth? Perhaps that’s a stretch. But, thanks to Pigafetta’s fascinating account of the first encounters between these two distant cultures, we know that the Tehuelche helped Magellan’s expedition at a crucial moment of the perilous journey, and the virulent Europeans would ultimately need all the help they could get to make it out alive.