Your Galapagos vacation will be so jam-packed with animal action, that some species are bound to go relatively unnoticed. One plucky little bird which refuses to be ignored is the Española Mockingbird that is famous for landing on tourists at Punta Suarez. Brazen though it may be, there are actually more important scientific reasons to pay attention to the Española Mockingbird and its cousins the Galapagos, San Cristóbal and Floreana Mockingbirds. 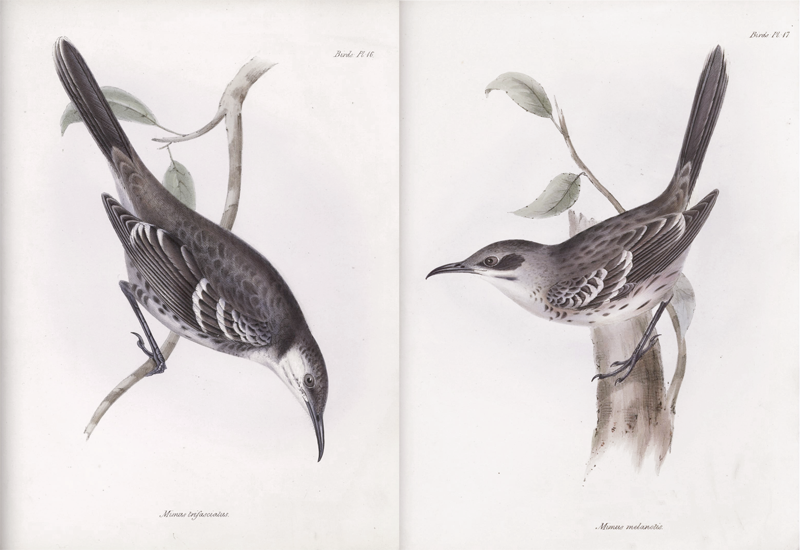 Darwin and the mockingbirds

Although the finches and tortoises get most of the evolutionary attention, the four species of mockingbird which are endemic to the Galapagos actually had more to do with Darwin elucidating his theory of evolution than all of those other species put together. It’s not that the mockingbirds are more important, or more representative of evolutionary processes, it’s just that the various ‘mocking-thrushes’ (as he called them) of the Galapagos were the genus that first alerted Darwin to evolution and the possibility of a common ancestor.

Dr Ernest Mayr, in his book What Evolution Is (2001) gives a good synopsis of Darwin’s thought processes:

It was an observation he made on the birds of the Galapagos Islands that led him to the branching theory. The Galapagos Islands are actually peaks of submarine volcanoes that have never had a land connection with South America or any other continent. All of the Galapagos fauna and flora got there by over-water (distance) colonization.  Darwin knew that there was only one species of mockingbird in South America, but he found a species of mockingbird on each of three islands in the Galapagos, with each species different from the others. He concluded quite rightly that a single colonization of the South American mockingbird had given rise, by branching descent, to three different species on three different islands in the Galapagos. Then, he further reasoned that probably all mockingbirds in the world had descended from a common ancestor, because they are basically so similar to each other. Mockingbirds and their relatives, like thrashers and catbirds, then presumably also had a common ancestor.

This chain of inferences led Darwin to the ultimate conclusion that all organisms on Earth had common ancestors and that probably all life on Earth had started with a single origin of life.

Hopefully these insights into the mockingbirds of the Galapagos will add another facet of enjoyment to your Galapagos vacation with Vaya Adventures. If you want to find out more, this excellent site put together by Dr Robert Curry from Villanova University, Pennsylvania, was the source of much of my information for this blog.