A few hours outside of Coroico, the town that marks the end of La Paz’s infamous Death Road, lies Tocaña, a small but vibrant coca-growing community of afrobolivianos. Descendants of African slaves originally brought over to work in the mines of Potosí, the residents of Tocaña are famous for the creation of saya music and dance, a mix of their African and Aymara heritage. Today, the majority of Tocaña’s Afro-Bolivian community work the rural coca plantations on the slopes of the temperate Yungas forests and subside principally on agriculture. 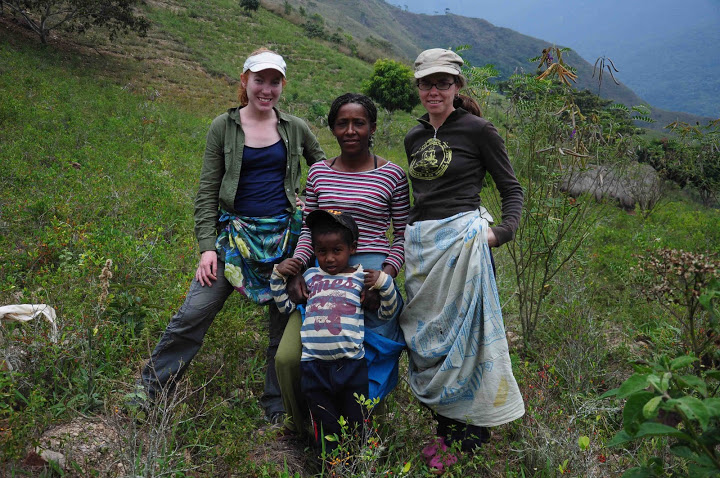 I visited Tocaña in 2011, quite unintentionally, accompanying a pair of musicians who were seeking out an African music and dance exchange. I had no idea what to expect, and was surprised to find a small, tropical hillside village that was completely deserted during the day. Of the 36 Afro-Bolivian families living in Tocaña at the time, all but the school teacher were out in the fields working, from 8 in the morning to 6 o’clock at night. When informed that an intercambio would not be possible, I jumped at the opportunity to ask our Afro-Bolivian host family if we could join them in the fields the following morning for a day of coca picking.

They agreed, and the following morning we tried our hands as cocaleros. We woke up at 7:30, made breakfast, and were on our way to the fields by 8. First we laid a tarp on the ground to air-dry the previous day’s pickings, then tied large bedsheets to our waists to serve as storage baskets for picked leaves. We moved through the plantation in rows and sections, carefully sliding off the leaves while conversing. By 10 am, the sun was already bearing down strongly and the jungle heat was close to unbearable. The work was relaxing, though repetitive, and provided ample opportunity to get to know the host and inquire after her family and the community. 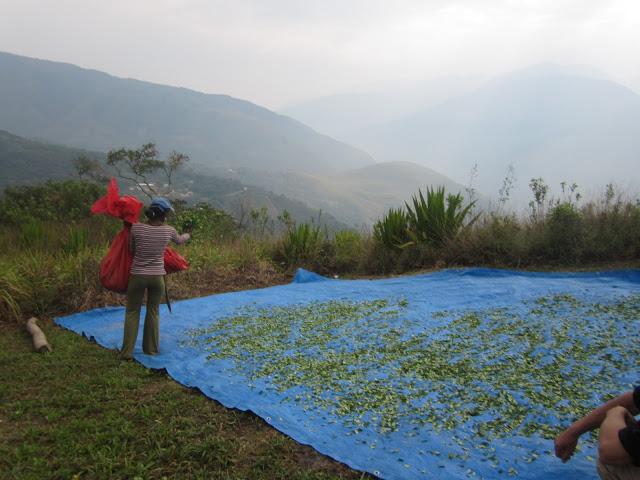 Laying out coca leaves to dry in the sun

I learned that all of the families have their own fields in the hillsides, allotted by the government, and spend their weekdays picking coca from morning until dark. Each person harvests about a duffel bag-sized sack of coca leaves per day, and if it doesn’t seem as though enough leaves were picked throughout the week, will sometimes work on Saturdays as well. The leaves are picked whole, collected, and left to dry on a tarp that is open not only to the strong sunlight, but also to the wind. Once completely dry, the remaining coca is bagged in bulk and sold in town, for its traditional and medicinal use.

The first few hours of coca picking flew by, but when the blazing heat of the noon sun settled in directly overhead, I was ready to call it quits. Though my makeshift basket was guiltily nowhere near as full as my host’s, my forehead was dripping with sweat, my whole body was sticky with humidity, and my extremely fair skin was desperately warning me against an increasingly imminent sunburn. I was disappointed in myself for having thrown in the towel only four hours in, but I comforted myself with the knowledge that my efforts had probably, at the very least, ensured that my hosts would not have to work over the weekend. The life of a cocalero is a difficult existence, enduring long hours, burning sun, and high humidity, but it’s a reality for the majority of the afrobolivianos and an experience I am very glad to have shared with the Tocaña community.