Asado – the Beef, not the Bull

When I arrived in Argentina I had heard about the ‘amazing steaks’, but to be honest I actually knew more about Maradona, Evita and the tango than I did about asado. A few days in the country sorted out all of those misconceptions. Granted, in Argentina Maradona is about as big as asado, but Evita is ancient history and tango is limited to Buenos Aires. 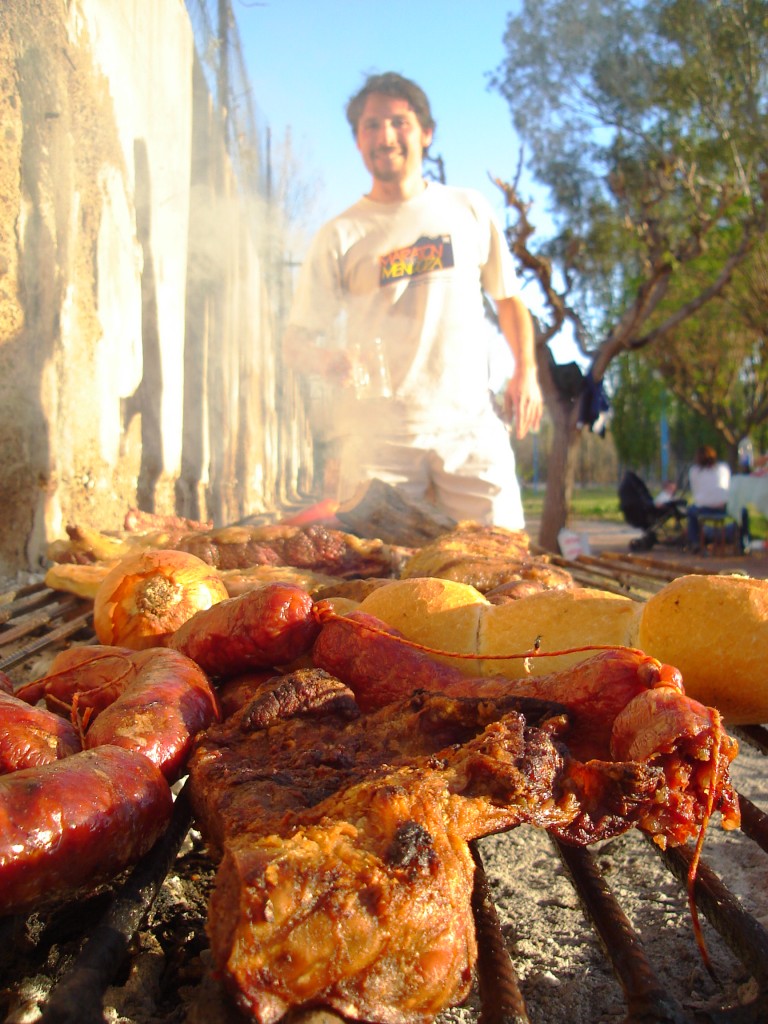 Asado is often translated as ‘barbecue’, but to do so is akin to describing camembert or roquefort as ‘cheese’. Barbecue involves cooking meat (often processed meat) above fire (often simulated fire). Asado is about an entire nation’s psyche, and only real meat and real fires will suffice. Argentines celebrate weddings, birthdays,quinceañeras and first communions in one way and one way only: the slow roasting of Flintstoneesque hunks of beef above a sparse smattering of coals.

Asado today is virtually unchanged from its gaucho beginnings. The rules are simple:

This makes it all sound quite regimented, but in fact an asado is a gathering of very relaxed, convivial people who just happen to be very serious about meat. Schedules are unimportant, the fact that the meat is a punto (well-done but succulent throughout) is paramount. I often found myself snacking on bread and potato crisps (and drinking too much Malbec!) while waiting for the main course which – quite regularly – would only arrive at two or three in the morning. It was always worth waiting for, though.

The offal would be served first. It could be anything from heart to liver to udder to brains, but my favourites soon became intestine (chinchulines) and sweetbreads (molleja). The chinchulines are very carefully cleaned and soaked beforehand, but their cooking is simple: lemon juice and salt are the only marinade required. Molleja actually comes from the thymus gland (a fist-sized lump of pure cholesterol in the cow’s neck) and it is incredibly rich. One slice is all you need…but it tastes so good you usually have more.

Next up are the sausages. Chorizos are short, garlicky sausages which are usually made of from a mixture of pork and beef, but they can also be pure pork. They’re great with grilled bread rolls. Blood sausage (morcilla) was another new favourite of mine: the concept is a bit vile, but it just tastes so good.

Finally, if you’ve still got room for more, the main course is served. The meat is always quite salty, but this can be toned down a bit on request. It is also possible to ask for your meat rare, but I wouldn’t recommend doing so, as it just won’t taste as good. Proper asado is cooked so slowly, so carefully, that apart from a slight crispening on the outside it is so uniformly tender and succulent throughout that it seems almost to be poached. There are so many cuts to choose from, but I would recommend vacío and, for something completely different, matambre.

You won’t really have visited Argentina if you don’t try at least one parrillada mixta. Take my advice: try everything. If you’re at the right establishment, you won’t be disappointed.