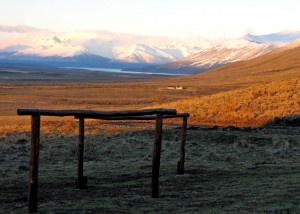 A few years ago, bumping along an unpaved road in Argentine Patagonia, I found myself reflecting on just how different this desolate grassland was from my urban home in Oakland, California.  We passed a gaucho trotting along on his horse, hours from any sign of civilization, and I wondered about his lifestyle.  Was his way of life more sustainable than that of my environmentally-conscious neighbors back in the Bay Area?  Did environmental issues weigh on his mind?  Or did he wake up each day as so many previous generations had done, with only the idea of tending the land and being rewarded with food on the table and a nice fire in the hearth?  There is a tendency in modern western culture to romanticize traditionalism, to rhapsodize about returning to a simpler lifestyle and living off the land, and to imagine that this type of traditional life is more sustainable and better for the planet.  But the truth in Patagonia is much more complicated.

As it turns out, traditional life in Patagonia has been an environmental disaster.  Sheep farming has destroyed millions of acres of Patagonia’s vast grassland, leaving behind dry, eroding soil and turning the region into a dust bowl.  Fortunately, environmental

preoccupation isn’t limited to urbanites.  In Patagonia, as in my part of the world, there are environmentally-minded people looking to address sustainability issues with creative solutions.

Julian Smith’s article Shear Salvation, in the September/October issue of Nature Conservancy, lays out some of those solutions.  The Nature Conservancy, in partnership with Patagonian ranchers and the clothing company Patagonia Inc., has implemented a program aimed at preserving 15 million acres – about 10% of the region.  A large part of the effort is a certification process: Traditional farmers implement land management strategies (such as rotating grazing fields or reducing herd size) in exchange for designation as a sustainable wool producer.  This is where Patagonia, Inc. comes into the picture: The company has committed to buying certified sustainable wool for its fall clothing line.

While the project is in its infancy, the results are already promising – estancias comprising nearly 3 million acres have already committed to the program.  Change is never easy, and in a culture defined by the word “traditional,” we might expect it to be even less so.  But the sustainable-grazing movement is rapidly gaining momentum in Patagonia, showing that while “traditional” doesn’t always mean “sustainable,” the principles of traditionalism and environmentalism can still go hand-in-hand.