Louise Mollinger recently returned from a special trip to Brazil with her daughter Fabiana. Louise adopted Fabiana in the Brazilian town of Goiania 30 years ago, and this was their first trip back. The story was really quite moving and we thought it would be worth sharing.

What was the purpose of your trip?

Louise: 30 years ago when I went to pick up Fabiana I began dreaming about the day we’d come back.  Most people who adopt children from foreign countries in this day and age are very aware of the importance of roots and that there can be roots in a new home as well as in a birth country.  So already 30 years ago I was thinking about the day we would come back, wanting Fabiana to be proud of the country and the people that she came from.  I think that’s a common feeling among adoptive parents who have children from foreign countries.

What were your impressions or emotions upon seeing Goiânia after so many years between your first trip there and this return trip? 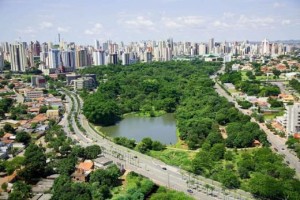 irst of all, it has changed tremendously, not surprisingly, in 30 years.   In the whole central part of the city there is building going on.  Roads were better than I remember.  There’s still the part of Goiânia outside of the city where we had stayed that maybe hasn’t changed real much, but overall Goiânia looks like it is doing much better than when we were there 30 years ago.  And it is growing.  Building is going on everywhere.  It’s a very pretty city, with lots of lovely parks.  Fabiana and Chad especially enjoyed one of the parks where the monkeys were just free. And one day they were there and drinking sugar cane juice and the monkeys came up and were eating popcorn out of peoples’ hands.  [Laughter] It is exotic.  It’s like nothing we have experienced, certainly not in Wisconsin.

The emotion Fabiana felt in Goiânia was just pride.  That’s the word she used when I asked her how she felt to be there.   She said “I feel so proud”.  It is a beautiful country.  She was excited to look for people who looked more like her than I do.  So she was noticing people with black curly hair like hers, or green eyes like hers, or the exact skin tone that she has. That was fun for her.

Brazil is a stunning country, just visually stunning; the people, the landscape.  We saw some wonderful thunderstorms in Goiânia.  Even though the rainy season is really over, there was some spectacular lighting and thunder and rain that we could enjoy from inside.  Just a beautiful country, the colors are unreal…  Fresh fruit for breakfast every morning, and you know that it is local!

Yeah, it really was.   I think she has no doubts that the United States is home… It is where her cats live [laughter]. But she did feel like she was also coming home there.  We discovered that she has dual citizenship.  And she traveled on her Brazilian passport there and her US passport coming home. She was proud of that too… kind of confirmation that she is a citizen of two worlds.

How old was Fabiana when she left there?

Three, just three. So, she doesn’t remember other than our pictures, she doesn’t remember anything from where she was.  I took along the journal that I had kept 30 years ago.  I brought it along with us. And Fabiana read it.  She has always known I had it, but I don’t think she’s ever taken the time to read it before.  And I reread it.  And it brought a lot of stories out.  You know how important family stories are.  It was very nice for the two of us, that she could ask some questions, and I could tell some stories.  As much as I could I told the stories that I know, as of the day that I came to get her.  So it was very, very meaningful for the two of us to share stories when we were there. And I was pleased that she wanted to look at the journal.

…There were so many people that we met, especially in Goiânia, that just seemed to be welcoming Fabiana back, like a lost sister.  And she couldn’t help but notice that.

…The English speaking guide in Goiânia did a half day tour with us, which I’m really glad we did, because she gave us thi

What was the most unexpected highlight of the trip?

We got to do a favela tour in Rio.  That was recommended by our English speaking guide in Rio.  We all thought that was really worth our time.  You know Brazil is trying very hard to take over and make the favelas safer, and this tour was in one of the favelas that is now under the control of the police and the state.  Part of the time we were in the bus, but part of the time we were walking around the favela and we even got to walk in some of the narrow walkways. … It was fascinating.  That was a nice side tour.

…Our local guide also took us to us to a hippie fair, one of these street fairs that are everywhere in Brazil, and we very much enjoyed that.  And the other thing for Fabiana and Chad that was incredibly unexpected and we couldn’t have planned it, everywhere we

went deaf people came up and talked to them. You know, saw them signing and came up.  In fact at the hippie fair in Rio all of the sudden Chad and Fabiana came over and said “Come, there’s a deaf artist here selling his work!” Even though Brazilian sign language is different than American sign language, they communicated quite well…

…They learned lots of new signs.  Fabiana is very outgoing so she doesn’t have any hesitation about interacting with people, even if the language is slightly different.  They really enjoyed learning new signs, and obviously that’s more fun for them than just hearing things through my interpretation.  Visually they captured the trip quite well, even without a lot of words…

Compared to trying to plan and arrange it on your own, how did you feel that booking your trip through Vaya Adventures helped add value to the trip?

There is no way I could have planned this on my own.  Connecting with people on the ground, and knowing there were numbers to call if things didn’t work out, that was very reassuring, especially when you are in a country where you don’t speak the language well.  ….I did appreciate that so much.  Even the very first time that I had called Vaya, I think I talked to Jim Lutz, and realized that you could hook up with English speaking guides that just felt like oh, that has to make the trip so much easier, and it did, it really did.

All the pre-departure information that you gave us, that really helped.  I can read guidebooks and I know how to go online, but to have one source that’s helping you kind of pull things together was valuable.  And you were very patient.  I know I changed things sometimes, and we were waiting for our connections to all come together, but you were very patient and helpful.  By the time we had the final trip all worked out I felt like it was all going to work well, and it did.

It was fun putting all of this together with you, especially with this being such a special trip.  Thanks for all the great feedback and for doing this interview.

You’re welcome.  If it might inspire another adoptive family to do a trip, that would be great.

…When Fabiana signed to me that how she was feeling was proud and she had a big smile on her face that was all I needed to hear.  It was right.

Well thank you so much for taking the time to share your story, and please pass my thanks on to Fabiana for being willing to share her story.

I will.  Thanks Jack.  Again, it was great working with you, and who knows, we may go back!