One of our most popular itineraries, the Highlights of Chilean and Argentine Patagonia, includes a one night stay in the charming fishing village of Puerto Natales. Over the last few years Puerto Natales has seen a boom in boutique, all-inclusive hotels that cater to travelers on their way to the nearby Torres del Paine National Park. These hotels are destinations in their own right and merit an extra night or two if you have time in your Patagonia itinerary. Many of these hotels have sprung up a few minutes outside of town and are situated along the beautiful Last Hope Sound. 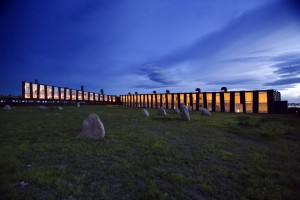 This architecturally unique hotel does a good job of blending modern, design oriented features that are pleasing to the eye and also help to showcase the natural beauty located outside its walls.

The hotel offers many great excursions around Puerto Natales, giving guests the opportunity to see the Chilean Patagonian pampas which most people miss in their eagerness to get to Torres del Paine.

The restaurant is excellent and has to be one of the few places in the world where you can eat guanaco carpaccio, which I can attest is delicious (guanacos are a relative of the llama and are found in abundance in this area of Chile). 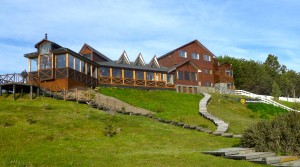 The Weskar has a warm atmosphere with rooms made of lenga (beech wood) and cozy, padded seating areas next to fireplaces. The only TV in the hotel is located in the common room. They added a deluxe lodge in the last year which is detached from the main building and has modern rooms with large windows overlooking the Last Hope Sound. The Weskar is a good choice for families or those looking for a more traditional lodge. 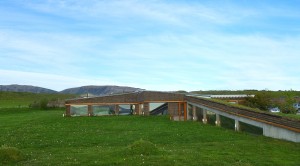 The Altiplanico Hotel Group has locations in San Pedro de Atacama, Easter Island, the Maipo Valley and also Puerto Natales. This Puerto Natales hotel was designed to literally emerge from the Chilean pampas.

Built into a hill for added protection, the hotel has an outside layer of pasto (mud brick), the same material the first settlers in the region used for their shelters.

You can walk up on the roof of the hotel which is covered in grass and watch the sun set over the Last Hope Sound.

This is the most luxurious option in the area. The Singular has a unique history in that the main building used to be the Puerto Bories Cold Storage Plant that for nearly seven decades slaughtered, processed and froze Patagonia lamb and shipped it mainly to Europe.

In 1999 it was declared a National Historical Monument of Chile and in 2010 was taken over by the Singular Hotel. The hotel has carefully restored the plant under the approval of the Chilean National Monuments Council and turned it into a self-guided museum.

You can wander through the old building on a walkway and gaze upon perfectly restored, twentieth-century machinery imported from England. The hotel rooms are located in the new addition to the hotel and are ample with great views onto the Last Hope Sound. The Singular offers a few exclusive excursions to its private land reserves in the Puerto Natales area. The hotel also has its own boat that it uses for several excursions on the Last Hope Sound.

Ask one of our travel specialists how you can stay in one of these hotels during your tour of Patagonia.