This past April I participated in the annual conference of the International Galapagos Tour Operators Association (IGTOA) in Miami.  I’ve been on the Board of IGTOA for 3 years, and the annual conference has been a great way to meet some of the people most actively involved in Galapagos conservation.   The funds that members and travelers give to IGTOA are re-directed to conservation projects run by these dedicated individuals and their organizations, so the conference also serves as an update on progress that been made and the continuing challenges that are being faced.  It was an inspiring and at the same time sobering look at the complex issues involved in protecting this magnificent but uniquely fragile place.

Speakers included the Executive Director of the Charles Darwin Foundation, an organization instrumental in the scientific study of the islands, and the Galapagos Program Directors for Wild Aid and Sea Shepherd.  Other presenters included Scott Ponkratz, Director of Ecology Project International, an innovative environmental education program for local 16 year olds, and Godfrey Merlin, a British biologist who has been working in the islands for decades in an effort to preserve their biological integrity.

Osvaldo Romero from Wildaid discussed why his organization focuses on efforts to improve the quarantine system in the Galapagos. He is at the forefront of trying to establish stricter quarantine procedures and more effective port facilities at the islands’ various points of entry.  The issues of cargo and quarantine control are fundamental in the Galapagos because it is via cargo shipments that the islands have seen the introduction of many new invasive species.  These invasive species constitute the single biggest threat to the original species of the islands, because the native species often have no defenses against them.

Godfrey Merlin amplified the importance of maintaining the biological isolation of the Galapagos.  Their isolation is the very thing that has made the islands’ wildlife especially unique, and also the thing that makes them especially vulnerable.  Many invasive introduced species (both plant and animal) have done extensive damage to the Galapagos environment and threatened several species with extinction.  One example is a fly, philornis downsi, that lays its larvae in the eggs of finches, with a devastating effect on the reproduction of these iconic Galapagos bird species. 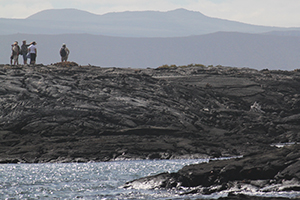 Scott Ponkratz spoke about his inspiring education program, which works with 16 year old kids in all of the local high schools (nine high schools in total) and organizes field studies in which the local students participate in scientific research and learn about the unique importance of the Galapagos Islands.  Teachers select the students who will have the opportunity to do the program (25% of the 16 year olds in Galapagos now participate).  It’s a respected program that is helping create future environmental leaders among the islands’ own population.  Unfortunately, the local public school system lacks the resources to do an extensive job of educating its students on the special nature of this priceless world heritage and the importance of protecting it, and this program helps fill that gap.

Alex Cornelissen from Sea Shepherd presented a powerful documentary on his organization’s efforts to stop shark finning in the Galapagos.  Boats filled with hundreds of illegal fins cut off of sharks from the protected Galapagos Marine Reserve have been apprehended and stopping these operations is difficult and dangerous work.  Another area of focus for Sea Shepherd has been on working to reform the legal system, with the help of a smart and motivated Ecuadorian lawyer on their staff.  Historically it has been virtually impossible to convict anyone for perpetrating the many environmental crimes that have taken place in the islands.  Sea Shepherd’s efforts helped bring about the first successful prosecution of someone for an environmental crime in the Galapagos and they continue to work on reforms of the legal process that will make it easier to prosecute environmental crimes.

Overall, the conference presented a lot of reminders about how important it is to view the Galapagos as a place to be protected and not exploited.  Travelers have played an important role in helping establish the Galapagos as a place to be protected for future generations, and the Galapagos are in many ways a major eco-tourism success story.  However, we have to accept that there are limits to what the Galapagos can sustain in terms of tourist traffic (which is why I support actual limits on Galapagos tourist numbers and stricter regulation of land-based tourism) and why we have to continue to support those working on the front-lines of Galapagos conservation.