Kayaking in the Rainforest Canopy versus taking the Canopy Elevator, Bridges, Towers or Sky Biking

Following a recent Tucano cruise in the Brazilian Amazon, kayaking in the canopy of the Amazon Rainforest is now my favorite means of exploring the unique ecosystem found at the top of the jungle’s centenarian trees. How does one kayak at the tops of trees? We’ll get to that, but first, a quick recap of other unique ways to explore the rainforest canopy. 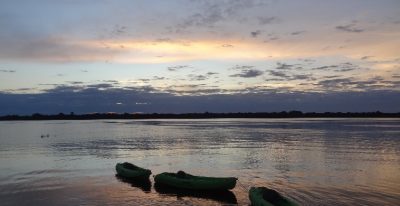 Kayaks in the rainforest

I’m often amazed at the ingenuity and craftsmanship that our local partners display when it comes to engineering complex structures in remote locations, all for the benefit of our traveler’s wildlife-viewing experiences.

The Napo Wildlife Center, a premier Amazon lodge in Ecuador that is only accessible by canoe, recently inaugurated a new tower with a glassed-in elevator right at the lodge that allows travelers to appreciate the mega-biodiversity of Yasuni National Park’s canopy from seven stories up. Now travelers of all ages can appreciate the canopy, even if their knees aren’t what they used to be, or they don’t feel like climbing stairs in the heat of the Amazon. 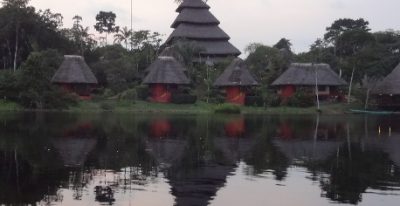 Inkaterra Reserva Amazonica, an eco-luxury Amazon lodge in Peru, boasts a series of suspension bridges that connect two tall towers and the tops of the tallest trees, so after climbing up the tower’s stairs travelers can walk about ¼ mile among the treetops, observing myriad bird species and other wildlife that populate the Tambopata area. Sacha Lodge in Ecuador has a similar canopy bridge walkway, and the Delfin I, II and III Amazon cruises out of Iquitos, Peru also offer a canopy bridge walkway experience as part of their cruise itineraries. 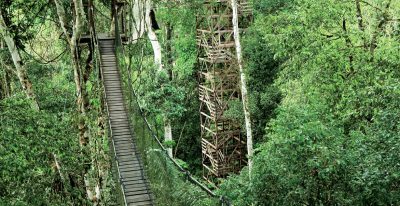 Upriver from Puerto Maldonado, deeper in the rainforest in the Tambopata region of the Peruvian Amazon, are a couple of excellent lodges: Posada Amazonas and Refugio Amazonas. These lodges have erected observation towers in the canopy. They’ve also built blinds in strategic locations near clay-licks that attract parrots and macaws, so not only can you see these highlight birds up in the canopy, you can see them descend to feed on the mineral-rich clay. Posada Amazonas and Refugio Amazonas also offer tree-climbing excursions for those willing to don a harness and hoist themselves up to the canopy by rope. 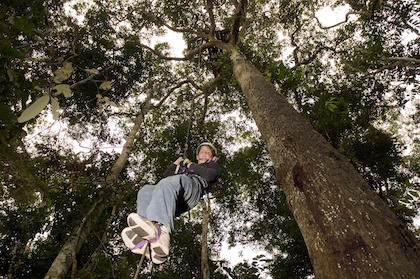 Climbing into the canopy

Most of the other top lodges in the Amazon also have canopy observation towers, including La Selva Lodge in Ecuador, the Manu Wildlife Center in Peru, and notably the Cristalino Lodge in Brazil, which features two 160-foot steel towers, the tallest in the Amazon. 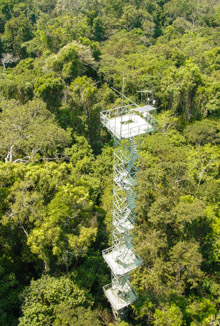 The canopy bridges and observation towers are great places to spot birds and other wildlife, particularly with a good pair of binoculars, and a good guide with a high-powered scope.

On the topic of unique ways to explore the canopy, an honorable mention should be included for the Sky Bike at Mashpi Lodge, just outside of Quito, Ecuador. While technically Mashpi is in the Cloud Forest, not the Amazon Rainforest, this is an area teeming with bird life and the fact that you can silently pedal above the canopy suspended by a cable across a gorge is just too cool not to mention. 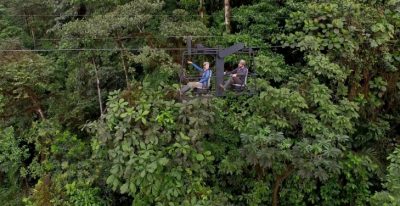 Other lodges in the Cloud Forest and Rainforest offer canopy zip-lining, though the noisy mechanics and shriek-inducing nature of this activity generally do more to scare away wildlife than provide an opportunity to view it.

Which brings me back to canopy kayaking. Silently coasting through the canopy in the flooded forests of the Brazilian Amazon along the Rio Negro earlier this month was as sublime a canopy experience as I can recall or imagine, and I’ve been fortunate enough to experience many of the aforementioned canopy explorations over the years. 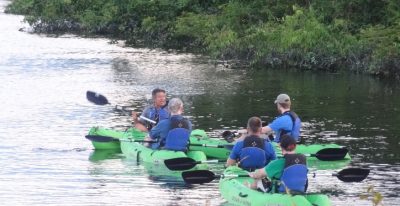 Canopy kayaking in the flooded forest

How is it possible to kayak in the canopy? It is all about timing and location. The timing of my recent Tucano Amazon trip (early July) coincided with the peak of high-water season and start of dry season in the Brazilian Amazon, near the city of Manaus, where the Rio Negro and the Rio Solimões combine to form the Rio Amazonas. Of course, I’d read about high-water season and the flooded Amazon forests, but I did not appreciate the depth and immensity of this phenomena until I experienced it firsthand.

The word “flooded” means different things in different places. As a kid growing up in the suburbs of Chicago, where we get our fair share of rain, we’d say a basement was “flooded” if the sump pump gave out during a storm and a bit of water covered part of the basement floor. When I moved to San Diego’s near-perfect climate after college, I remember laughing when the locals described the road as “flooded” when a rare drizzle caused a puddle to form. Similarly, in the dry climate of Santiago, Chile, where I’ve lived for over 6 years now, any amount of standing water on the road after a rainfall causes the road to be deemed inundado (“flooded”).

But what does the word “flooded” mean in the context of kayaking in the “flooded” Amazon Rainforest? Some quick facts to put this in context:

•The Amazon Basin is the largest drainage basin in the world, encompassing about 2,720,000 square miles. If this area were a country, it would be the 7th largest country in the world.

•In some parts of the Amazon, the river levels can rise up to 65 feet (!) at the peak of high water season, as compared to their lowest levels during low water season.

•The Amazon empties more fresh water into the ocean than the world’s next seven largest rivers combined. The Amazon alone constitutes about 20% of all fresh river water discharged into the ocean globally.

So, when we talk about kayaking in the flooded Amazon Rainforest, we are talking about kayaking at the top of the trees: canopy kayaking! For all of the best intentions of our friends and partners throughout the Amazon who have painstakingly dragged steel beams and sturdy cables into the jungle and assembled staircases, towers, bridges… even an elevator, nothing can compare with the awesome power of Mother Nature raising the river level of the Rio Negro so high that some of the islands of the Anavilhanas Archipelago disappear completely, while others are covered just enough that the wildlife must scurry up to the remaining exposed treetops, which are perfectly navigable by kayak or motorized canoe with the right guides. 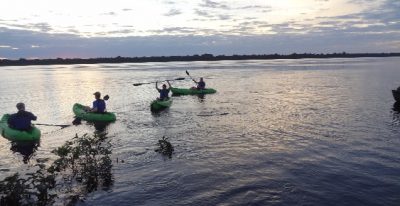 Kayaking in the canopy allows each traveler some independence and freedom to move about in different directions, far more so than marching across a bridge or standing on a platform atop an observation tower. The kayaking excursions on our Tucano Amazon cruise were a highlight of an all-around excellent experience, as they allowed us to silently spread out a bit within the canopy and discover wildlife in a fun and active way. 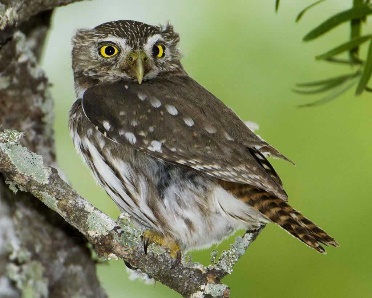 While I honed in on a Ferruginous Pygmy Owl, following the naturalist guide’s lead and coaxing the diurnal owl to swoop down near my kayak by imitating its call with short whistling sounds, my brother Mark, who joined me on the Tucano cruise, paddled his kayak around a treetop and discovered a family of squirrel monkeys gathered overhead. We observed the primates from our kayaks for a while, then, thinking our early morning wildlife experience was complete, began to paddle back to the Tucano – only to be joined by a pair of Grey River Dolphins, who graciously escorted us back to our ship for breakfast. 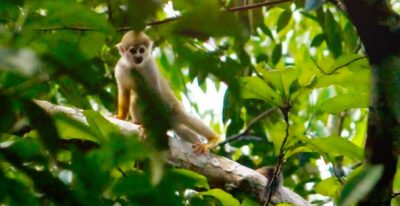 The Amazon offers a unique nature experience any time of year, and when the water recedes there are other benefits. Hiking trails open up and inland lakes form, creating great areas for spotting Giant River Otters and other wildlife. But being on the river at the peak of high water season (generally end of June / early July in the Manaus area or end of March / early April in the Iquitos area) and being able to kayak high in the canopy was an Amazon experience I’ll never forget. 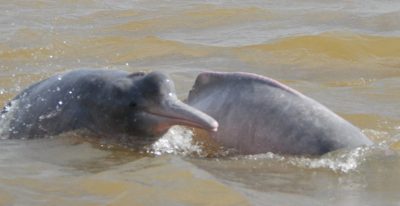