Travel to me has always been an eye-opening experience, whether that’s exploring the local trails around Oakland and Berkeley, or expeditions off to far flung places like Antarctica. And while these adventures offer an incredible array of new information, there is typically more to each destination than first meets the eye. 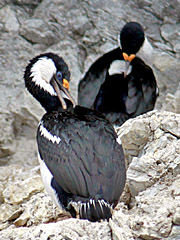 This became abundantly clear to me in Antarctica after watching blue-eyed shags, also known as blue-eyed cormorants, zip through the air from sea to nest over and over again.

I had seen cormorants in the Galapagos Islands, however they lacked one attribute that   quickly differentiated themselves from their southern relatives; the cormorants I saw in the Galapagos couldn’t fly. I recognize that there are many different species of cormorants, upwards of 40, but it wasn’t until watching the blue-eyed shag fly effortlessly through the air that the Galapagos cormorant really stood out to me.

Upon my return from the “white continent” I wanted to learn more about the species I’d seen close to the equator. This lead to a crash course in genetic drift, the founder effect, and change in allele frequencies… a bit removed from the general information on the Flightless Cormorant I was in search of (evolution would require some focused reading at a future date). 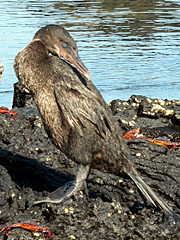 After removing myself from the science side of things, I realized what astounded me most was that the Flightless Cormorant was endemic to the Galapagos Islands, and more specifically the islands of Fernandina and Isabela. How could I have let this piece of information slip by? I was also amazed that there are only about 1400 of these birds in the world (all residing on just two islands in the Galapagos) and that this number is one of the highest ever recorded. The population in 1983 was reduced to around 400 individuals, making their recovery very impressive while underlining how fragile of an existence they lead and how singular events, like El Nino of 1983, can have major consequences for select species in the Galapagos.

While evolving into a bird that doesn’t need to fly, similar to the penguin, is an incredible feat, so is viewing these birds without truly recognizing their place in the world. This is what makes the Galapagos Islands such an incredible destination. Whether you’re there to see the Waved Albatross, Christmas Iguana, Fur Seal, or any number of other animals, the Galapagos Islands are truly a place where you can observe and learn about animals not found anywhere else in the world. It is a dynamic classroom, accented by an nonthreatening environment, where the animals seem to be as curious about you as you are about them. If you haven’t experienced this type of interaction before it’s time to place the Galapagos Islands on your list of must sees. You won’t be disappointed!

Flightless Cormorants on the Island of Fernandina