Even the Rain is at once a deeply political message and a gripping tale. It tells the story of a Spanish and Mexican film crew who are trying to make a movie about the truth behind Columbus’ arrival in the new world; the ugly truth about Spanish exploitation of the Indians. The irony of the situation is that the crew is filming in Bolivia – the Americas’ most indigenous nation – because everything will be cheaper there – extras, locations, hotels… 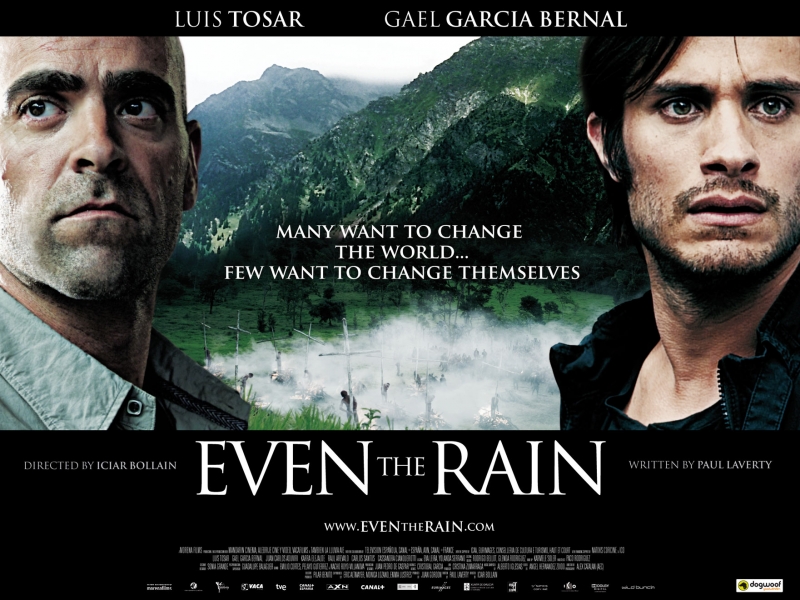 And so the two narratives of exploitation unfold together. From the outset, some of the actors highlight the hypocrisy of the situation, but they only do so after having consumed too much wine at dinner after filming. The producer, Costa, on the other hand, is unashamed in stating his reason for choosing Bolivia, proclaiming repeatedly that they can pay their extras ‘2 putos dolares’ a day.

The basic premise of the movie – ‘film about exploitation is made using exploitative methods’ – is sound but the director Icíar Bollaín is not content to leave it at this. Instead he sets the film against the backdrop of the famous Water Wars of Cochabamba, which took place in 2000 when the government privatised the city’s water supply, causing a 300% increase in water prices.

At a casting for the film within the film, a scuffle ensues when the producer tries to turn away hundreds of surplus extras. Daniel, the father of one of the girls who is keen to audition, objects vociferously and a scuffle ensues. Based on this outburst the director, played by Gael García Bernal, casts Daniel as Atuey, the leader of the indigenous revolt against Columbus.

Things get complicated when it emerges that Daniel is also the real-life leader of the people’s fight against the privatisation of the water supply. He is, in fact as in fiction, a firebrand Indian who will fight against injustice wherever he sees it. Costa, the producer, violently disagrees with the director’s decision, but there is no changing his mind. As one of the characters in the film says, “Truth has many enemies; untruth many friends.”

The water protests progress into revolts and ultimately descend into full-blown war. Daniel is paid off by Costa to keep out of the protests, but although he accepts the money his conscience does not allow him to remain uninvolved. Things get even worse when Daniel overhears Costa laughing about how little he is paying the extras.

As the filming of the Columbus movie comes up against more and more obstacles, a secondary narrative – that of the relationship between Costa and Daniel – begins to take precedence. To avoid giving too much of the plot away, I will just say that circumstances, and mutual feelings of guilt, bring the two closer and closer together. At the end of the film the Columbus movie may remain unfinished but this is assuaged by Costa and Daniel’s growing respect for one another.

This film is about a lot more than Columbus’ arrival in the New World and the Water Wars of Bolivia 13 years ago. It is about the ongoing relationship between the natives across Latin America and the Spanish which started in the 15th century and continues today. It is about the Crown and the Church and language and gold and guns and slavery. It is about the fact that even today Latin Americans with darker skins are poorer than those with whiter skins.

That it is set in Bolivia is no coincidence, as this country is more Amerindian than any other, but it is also representative of a continent. It is not the first film to be made about the fraught relationship which is colonialism, and it certainly will not be the last. It is however a very valuable addition to the oeuvre, as well as being a good two hours’ entertainment.