I moved to Santiago, Chile a few years ago, and one of the first murals I saw that took my breath away was located outside the Bellas Artes metro station on two kitty-corner walls. These portraits were huge, with monochrome backgrounds, bold colors, and clean lines. The subjects looked like button-eyed dolls with patchwork hands, and I was incredibly impressed by their uniqueness. I later found out that these murals were painted by the Chilean artist Inti Castro (INTI), who paints street murals largely to demonstrate the rich culture of Latin America and Chile. His work is an expression of a complex cultural tapestry made up of Catholics, Incans, peasants, and the Mapuche people, one of the few remaining native communities in Chile. He often creates a political statement in his painting, shining light on the socially and economically marginalized. 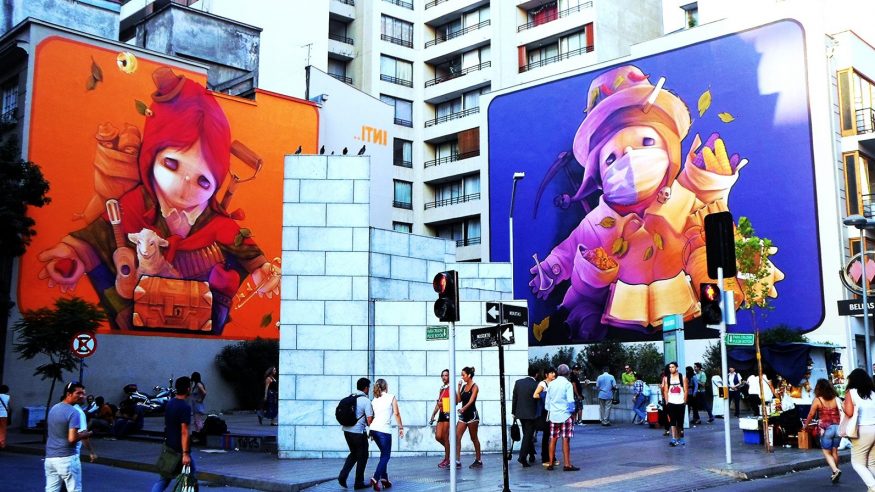 In early 2018, I heard that the Bellas Artes murals would be painted over, partly because the community had “contributed” to the painting. Such is the lifespan of street art – between pollution, infrastructure damage, and further graffiti art, it rarely lasts more than a few decades. I told my partner Franco that we should go to see the murals one last time, but sadly we had arrived too late. The walls were already white, with the outline of what was to come already drawn out. The silver lining was that I saw INTI himself in the rafters, working on another doll-like piece, very clearly his signature style.

INTI’s name comes from the Incan word for “Sun.” The Incan people worshipped the sun as a god, and INTI’s name is a tie to his pre-colonial Chilean roots. INTI was born in the port city of Valparaiso, Chile in 1982. He started painting on walls when he was 13 and has continued to develop his talents in gigantic murals ever since. In the past, he collaborated with six other Chilean street artists in a group called STGO Undercrew, and though he still occasionally collaborates with them, many of his pieces today are created solo. His work can be spotted in Valparaiso, Santiago, and other parts of Chile; however, INTI’s work has spread to several international locations across South America, Europe, and the United States. 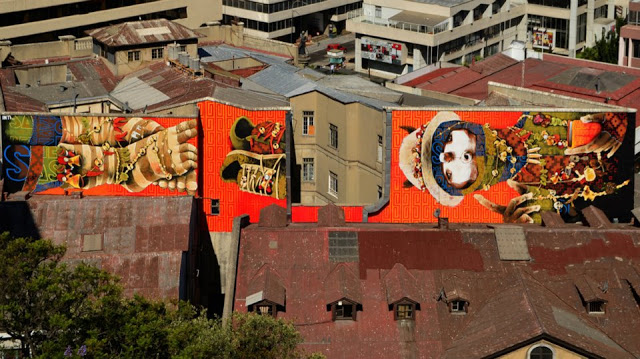 One of my personal favorites can be seen from the lookout of Paseo Atkinson in Valparaiso. Within the eclectic cityscape below, there are three walls upon which a signature INTI piece is stretched. With a bright orange background and round, patchwork features, the full body of a man is floating horizontally in a dreamlike state. His body is on the right wall, cut off below the waist. His lower legs and bare feet are painted on the wall to the left, with his shoes painted on the wall in the center. This piece was meant to call out the economic disparity in Chile, and the prevalence of poverty among the Mapuche people. It is a beautiful, powerful piece and no Valparaiso street art tour is complete without stopping to take it in. 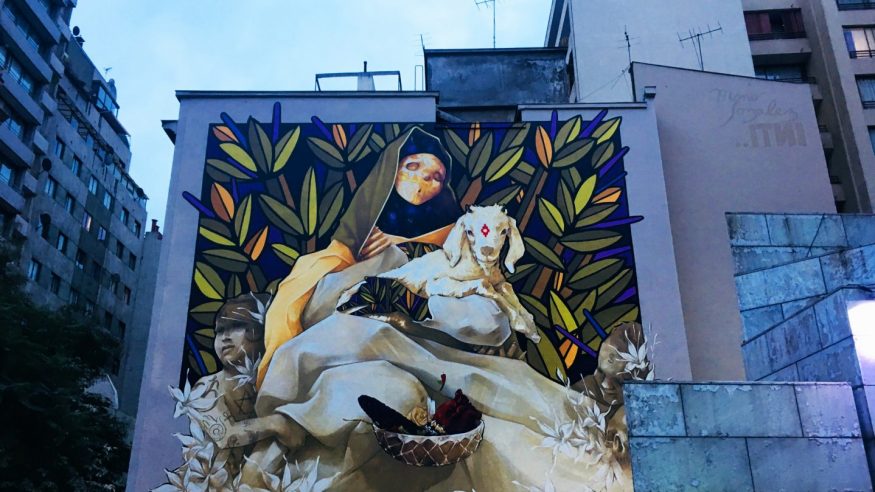 Recently I returned to the Bellas Artes neighborhood of Santiago to see the completed mural. The two kitty-corner walls are no longer a single mural: the west facing wall has been painted in vibrant block foliage and partially hidden faces by the artist Alejandro “Mono” González. He contributed to the background of the south facing wall, which features a portrait created by INTI. This new piece is of the Virgin Mary with fabric draping over her hair, holding a fluffy lamb. The mural is an homage to the mix of Catholicism with the ancient religions of South America. Though I miss the two colorful portraits from before, with their childlike features, this new piece is striking and beautiful, a fresh new look for the neighborhood. I am already looking forward to what is up next for this Chilean artist.