Exploration of the Amazon River

The sun rose cotton candy pink as we cruised over the placid water of the Amazon. Even now I can imagine the scent of the river first thing in the morning, woody, earthy, damp. We were bird spotting, and we did catch sight of a few toucans, macaws, and herons. Even more exciting, though, was when we spotted a sloth lazily hanging onto the side of a tree. The captain of our motorized canoe cut the engine and paddled through the aquatic grasses to a better vantage point so we could watch the sloth painstakingly reach a long arm up to latch onto a higher branch. 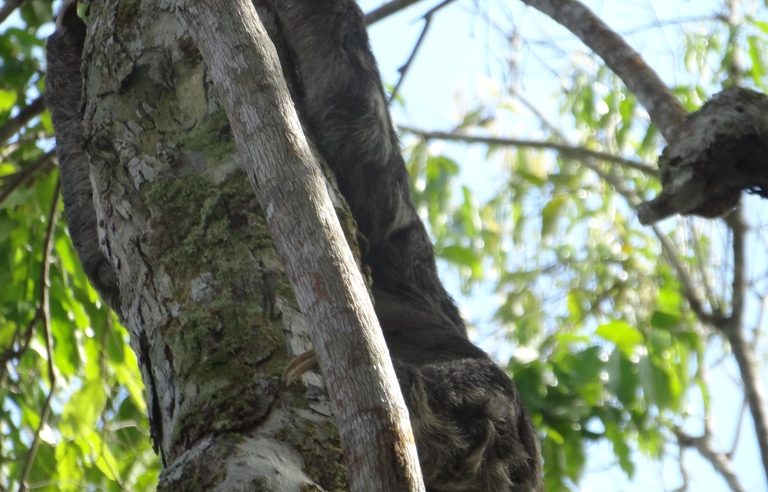 A sloth up in the trees

Eventually we headed back, it was lunchtime and the cook had been exclusively preparing local dishes. On the menu that day was fried piranha, a fish that is quite bony, but flavorful all the same; boiled manioc (cassava) salted and spiced, and fresh papaya. Of course, no trip to Brazil is complete without sampling feijoada, a rich pork and black bean stew served over rice with a sprinkling of farofa (fried, seasoned cassava flour). Similar to how many Mexican dishes are doused with a splash of hot sauce after serving, farofa is used to add crunch to the texture, and another layer of seasoning to the flavor profile of a typical Brazilian dish.

In the afternoon I chose to cool off in the deliciously fresh water of the Amazon river. After a morning in the hot sun, the river water was refreshing, tranquil, the color of sweet tea. There is a lot of life under the surface, such as piranha, snakes, and crocodiles, but the threatening animals are usually found among the aquatic foliage. Our guides directed us to swim in open waters where the most we would encounter would be harmless fish.

We started the next day with a hike through the jungle where we got up close and personal with the smaller members of the animal kingdom. Deep in the rainforest termites are often used as mosquito repellent by taking a palmful from a nearby tree, smashing them and rubbing their remains on the extremities. I was dubious, but have to admit I was less bothered by the incessant mosquitos afterwards. Our guide also fished edible grubs from the flora. I declined a sample, but my travel companion swore they were lightly sweet with the distinct flavor of almonds. These grubs are a valued food source of the local people due to the fact that they are high in both protein and unsaturated fats.

After a flavorful lunch of escabache, fish cooked in a fragrant, tomato based sauce and a hearty dusting of farofa, we went back into the rainforest to visit the home of a native Amazonian. These homes are built entirely out of local, natural resources and raised up on stilts to accommodate the dramatic rise and fall of the water level through the seasons. Out back, under a thatched palm roof, the family worked together to grind, season, and fry farofa. The process was rhythmic, and almost ceremonial, as all members of the family participated to prepare this staple.

On our way back to the city Manaus, we made a stop at the “Encontra das Aguas” (Meeting of the Waters) where you can see a visible divide between the Rio Negro and the Amazon River—or Rio Solimões as it is known locally. This obvious separation of waters is over 3.5 miles long (6 km), and the rivers clash without mixing due to the difference in speed, density, and temperature—at 82 °F (28 °C) the Rio Negro is a full 10 °F (6 °C) warmer than the Rio Solimões. Putting your hands in the waters, you can feel a difference between the rivers, and understand why this natural phenomenon occurs for miles on end before the rivers finally blend together.

If you are interested in gliding along the Amazon river or trekking through the rainforest to see the wildlife and explore the local culture, contact us about our Brazilian Riverboat Cruise on the Amazon.