Though Ecuador is a relatively tiny country, slightly smaller than the state of Nevada, it is home to a tremendous amount of biodiversity and natural beauty. From Marine Iguanas lounging on the volcanic Galapagos Islands off the Pacific Coast, to Andean Condors soaring over the central “Avenue of Volcanoes,” to Spider Monkeys hanging in the swaths of virgin Amazon Rainforest along the eastern border, Ecuador’s varied ecosystems provide natural habitats for an incredible array of species.

Unfortunately Ecuador, like much of the world, finds itself facing many simultaneous environmental threats, including invasive species in Galapagos, deforestation in the Andes, and oil spills in the Amazon, to name a few.

Fortunately, there are many conservation projects underway in Ecuador, and there is government and popular support for efforts to protect the nation’s unique ecosystems. In fact, in 2008, Ecuador adopted a new constitution, the world’s first to explicitly recognize the “Rights of Nature,” legally granting that nature in all its life forms has the “right to exist, persist, maintain and regenerate its vital cycles.” 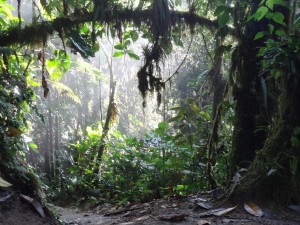 One excellent example of a successful effort to conserve a specific natural habitat has come not from a government decree, but from a grassroots change in local consciousness, along with growth in sustainable ecotourism. It can be found in a region of Ecuador that is often overlooked but absolutely worth visiting: the Mindo Cloud Forest.

About a 2 hour drive from Quito, descending along the Andes toward the Pacific Ocean, lies the small town of Mindo. The surrounding tropical cloud forest is home to over 400 species of birds, and attracts bird watchers and nature lovers from around the world.

A local conservationist I met when last in Ecuador, Angel Paz, had previously supported his family by farming on the outskirts of Mindo. Sadly, subsistence farming in this region often involves clear-cutting the cloud forest. Much of the surrounding forest has already been clear-cut and is now used for grazing livestock.

But Angel’s land, dedicated in 2005 as the Paz de las Aves Bird Refuge, has been spared, thanks largely to Angel’s perceptiveness and unique connection with the birds in this area, and the continuing support of bird lovers and adventure travelers to the area. It is very likely that this small area of the forest would have been clear-cut, like so much of the surrounding area, had it not been for Angel’s discovery of an Andean Cock-of-the-Rock lek, an area where birds gather to perform their mating dance, which takes place regularly at a specific spot on the reserve. He collaborated with local birding guides and they started bringing birders and nature tourists to see the exotic bright red birds go about their daily ritual, charging an entrance fee of about $20 per person.

Angel’s operation has grown in fame as 180 species of birds have been identified on his small (about 70 acre) private reserve. He has his own names for many of the birds, and lures them out for visitors by tossing bits of worms and calling to them: “Come out Maria! Come out Shakira!” Sure enough, out comes “Maria,” a Giant Antpitta, a species vulnerable to extinction. Out comes “Shakira,” an Ochre-breasted Antpitta, a species classified as near-threatened, playfully named Shakira by Angel for the way she moves her tail. 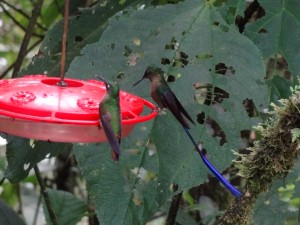 Angel and his brother also set up fruit feeders that are frequented by some very beautiful exotic birds, including the colorful Toucan Barbet, the bright green Crimson-Rumped Toucanet and the cheerful yellow Blue-winged Mountain-tanager. While of course no specific sighting can be guaranteed on any given day, Angel has a good sense of the birds’ patterns and feeding times, so visitors often do have the opportunity to see and photograph these terrific birds up close. Angel’s reserve also has hummingbird feeders that bring many colorful species of Colibríes such as Booted Racket-Tails, Empress Brilliants, and Velvet-Purple Coronets, all wonderful to observe for the serious birder and casual nature lover alike.

A visit to the Paz de las Aves Bird Refuge is an opportunity to participate in grassroots conservation, directly combating deforestation and preserving biodiversity by empowering a local family to profit from protecting the environment, sharing their knowledge of the local species and raising awareness of the unique ecosystem of Ecuador’s Tropical Cloud Forest.

An adventure in the Mindo Cloud Forest, including Angel’s reserve, can easily be incorporated into an itinerary including any of our naturalist Galapagos cruises, added to our Highlands and Haciendas itinerary, or combined with a visit to an Amazon jungle lodge or Amazon cruise.