Wildlife Experiences Found Only in the Galapagos Islands

The first time I visited the Galapagos Islands, I assumed my experience there would be the same as in so many other places famed for their wildlife – actively searching out animals, sometimes seeing nothing but a glimpse of a fleeing creature, or waiting patiently for an appearance, where even the click of a camera shutter can scare it off in an instant. As it turns out, in the Galapagos, the wildlife is all around you and it’s not shy. 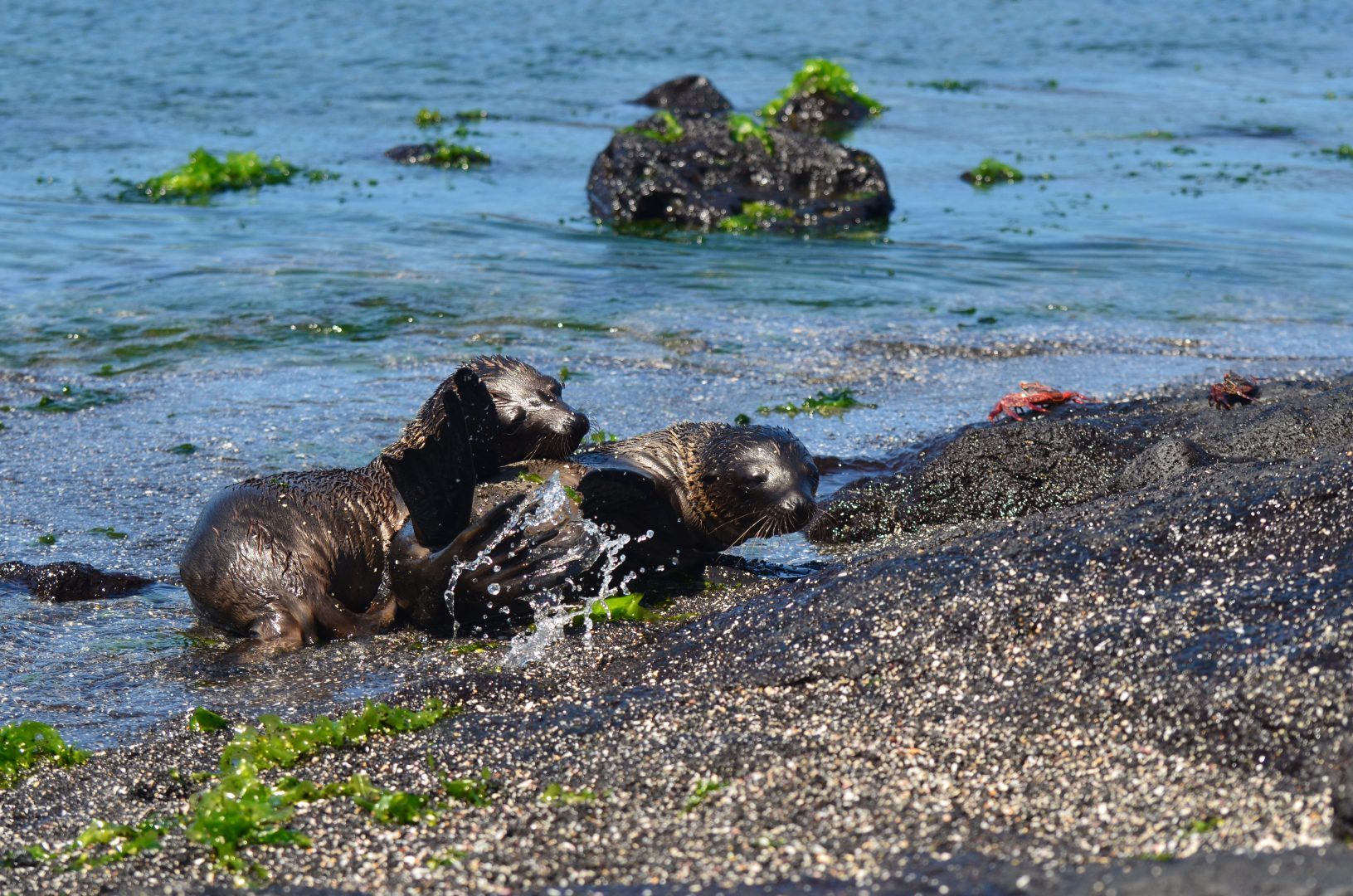 The Galapagos Islands are often described as “nature’s great experiment,” due to the endemic wildlife that has evolved in virtual isolation over the course of millions of years. Charles Darwin, on his famous voyage aboard the HMS Beagle, developed the basis for his Theory of Evolution by observing the unique species there. Those millions of years of evolution have led to few natural predators, so the wildlife is friendly and curious. This fearlessness means that you’ll have one of the most intimate experiences with nature possible. Snorkeling with marine iguanas and coming face to face with a boulder-sized giant tortoise are part of a normal day in the islands. 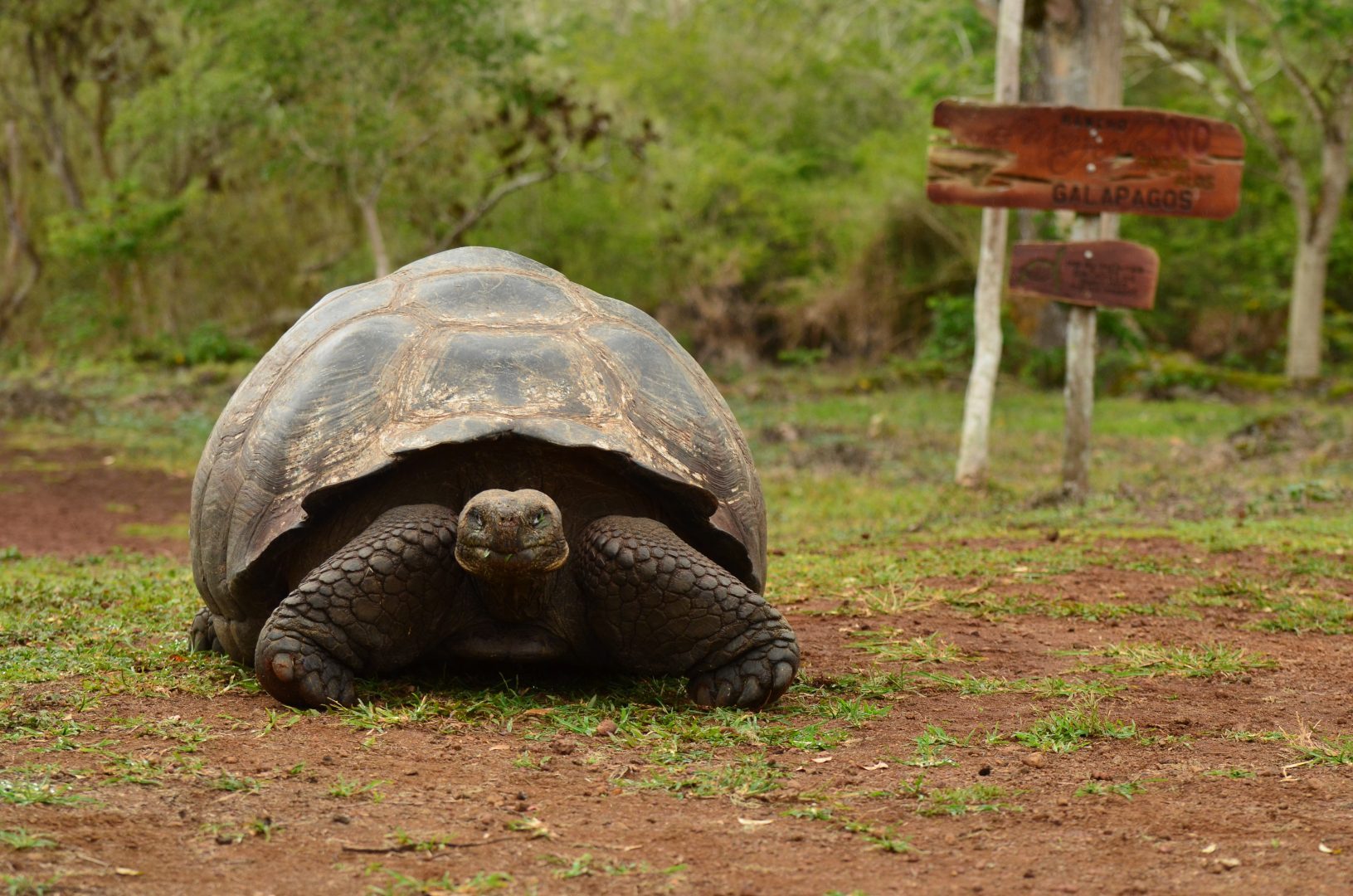 On the first day of my 8-day Galapagos cruise aboard the 16-passenger catamaran Cormorant, I visited the highlands of Santa Cruz, where we walked through the lush, misty scalesia forests of a protected tortoise reserve looking for the emblem of the islands, Galapagos giant tortoises. They roamed freely everywhere I looked, crossing the dirt roads, seeking refuge from the hot sun in the shade of the trees, and dotting the farmers’ fields, munching grass right alongside the cows. They are the largest tortoises in the world and among the longest-living animals on earth, with an average lifespan of over 100 years. 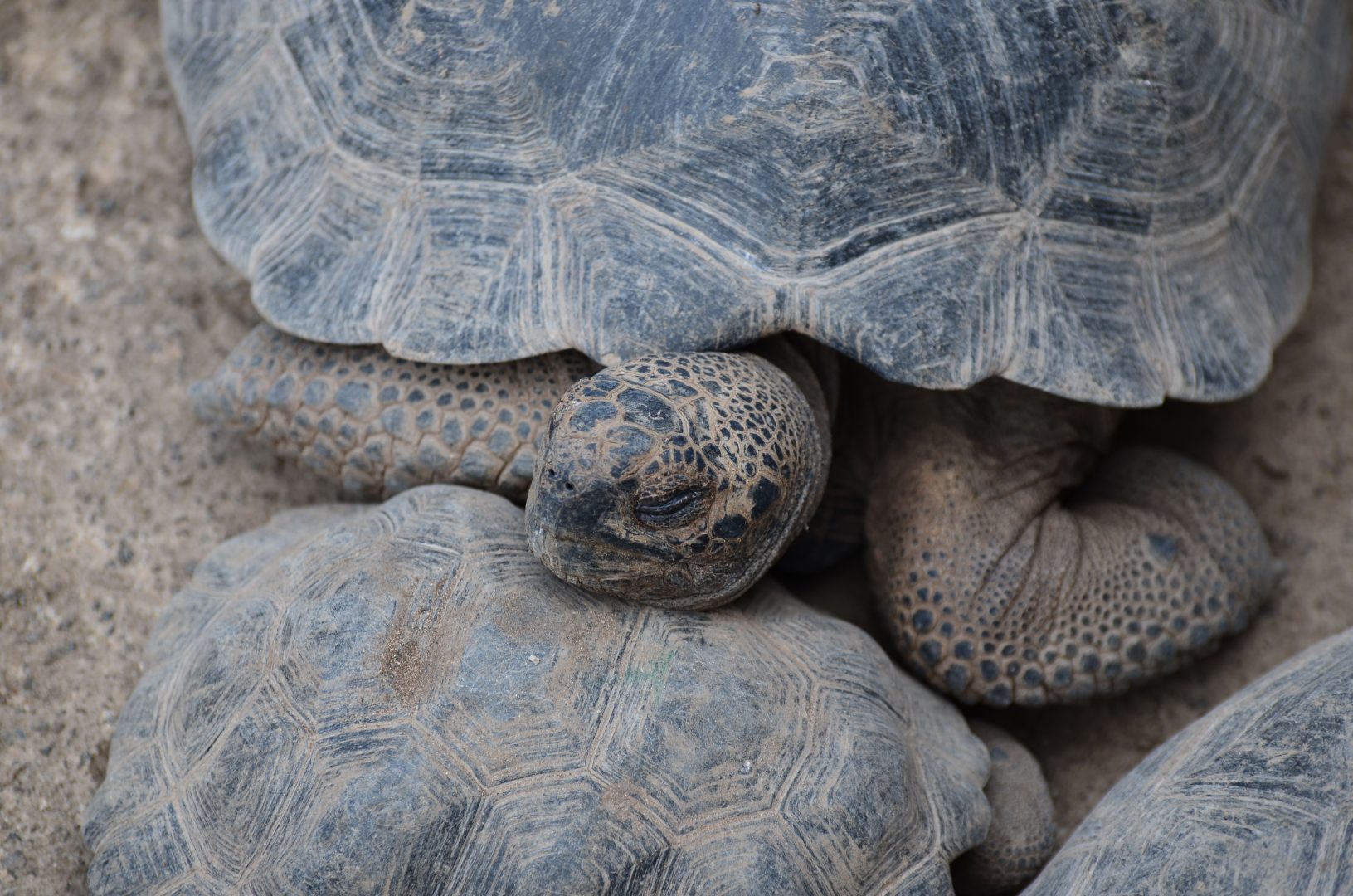 The Galapagos Islands are also home to the only marine iguanas in the world. Darwin wasn’t so much a fan, writing in his journal, “The black Lava rocks on the beach are frequented by large, disgusting clumsy Lizards. They are as black as the porous rocks over which they crawl & seek their prey from the Sea. I call them ‘imps of darkness.’” Maybe he should have snorkeled with them: Like many species in the islands that are slow and awkward on land, in the water they become adept and streamlined. You’ll most likely see so many iguanas on your trip that they will start to feel like pigeons in a city plaza, but it’s fascinating to watch them go from lying motionless on the rocks basking in the sun to slowly making their way down to the water to munch on algae and paddle around in the waves. They blend in so well with the rocks that sometimes you won’t notice one until they “sneeze” saltwater at you, one of their evolutionary traits that protects their kidneys from the saltwater in their bodies. 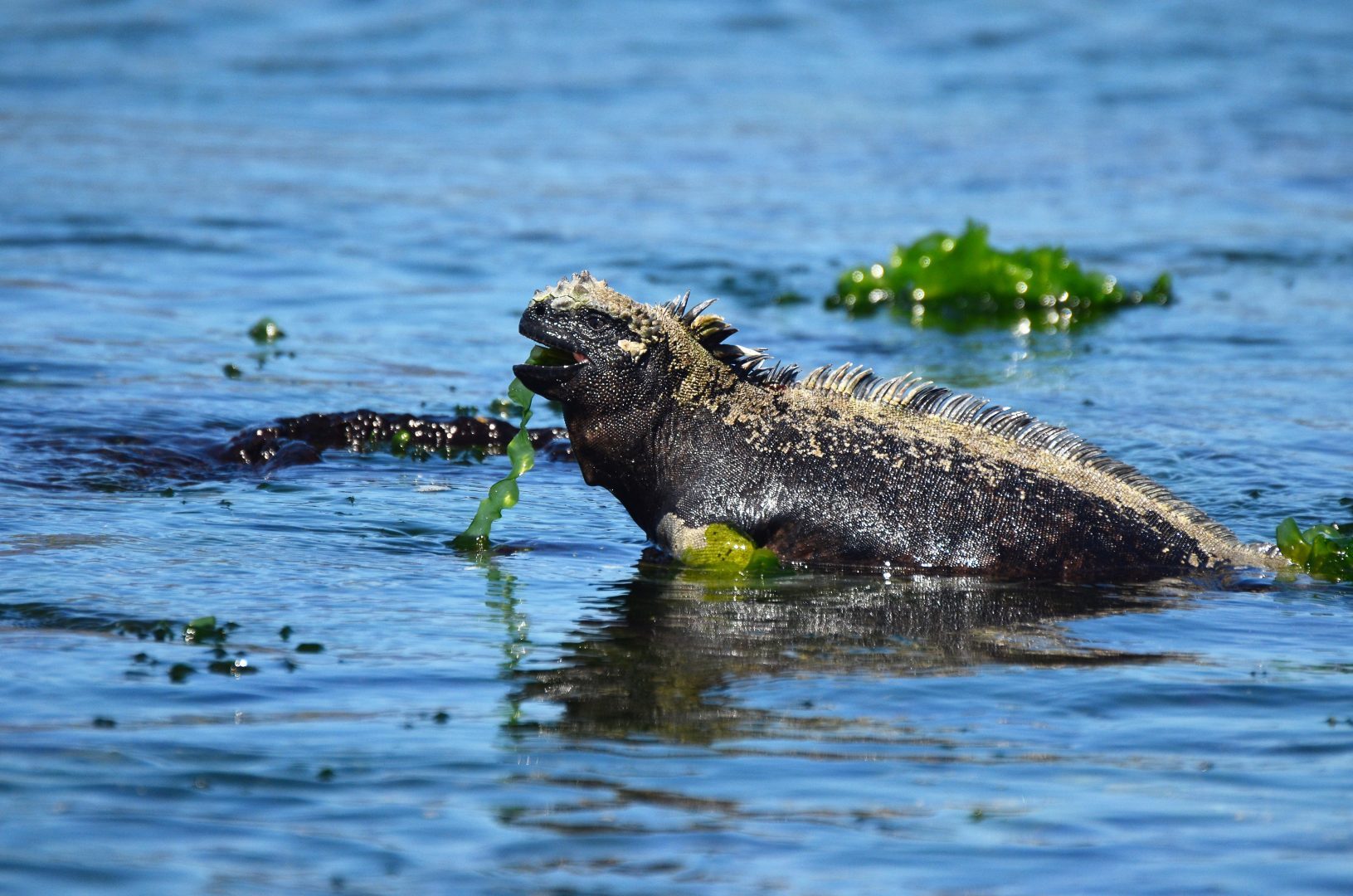 Once we coasted around to the colder, nutrient-rich waters of the western islands of Isabela and Fernandina, we could see Galapagos penguins, the only penguin that lives north of the equator. They are goofy and bumbling on land, but become speeding bullets in the water, darting around you, a blur of black and white. Our guide was particularly good at making a penguin sound, which sounds like a honk, and after a few of these calls we saw two little black and white heads pop up from the water and curiously paddle their way over to our boat to say hello.

Found only on Fernandina and the western coast of Isabela, the flightless cormorant has lost its ability to fly over the years, but in its place developed a much stronger (and more important) swimming ability. As our panga boat coasted lazily around the rocky outlets near the islands, we watched the cormorants pop up from the water with beakfuls of algae for their nests and stand in the sun to dry off, wings outstretched. 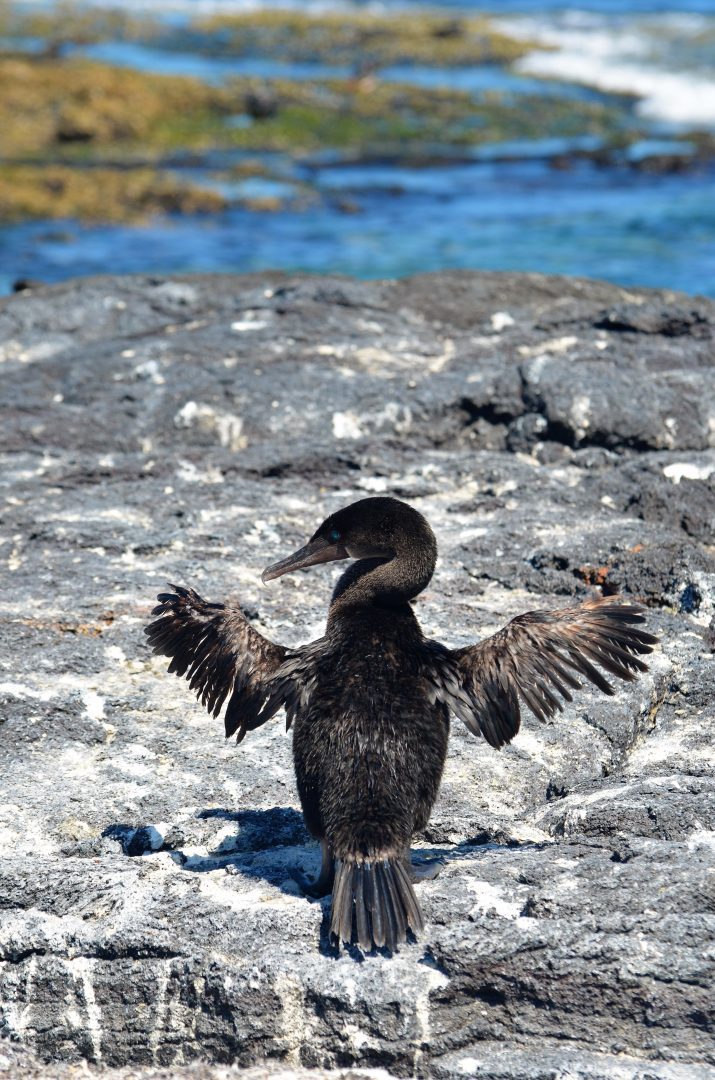 The massive waved albatross is the largest bird on the islands, with a wingspan of up to eight feet. They are so large that they have to take off like an airplane before flying, setting off down a “runway” of sand before catching a strong wind to carry them up and away. These birds are a bit more elusive, since they breed and nest only on the island of Española from April to December. Their mating rituals, which consist of clacking their beaks together and dancing, are one of the most entertaining spectacles in the Galapagos. 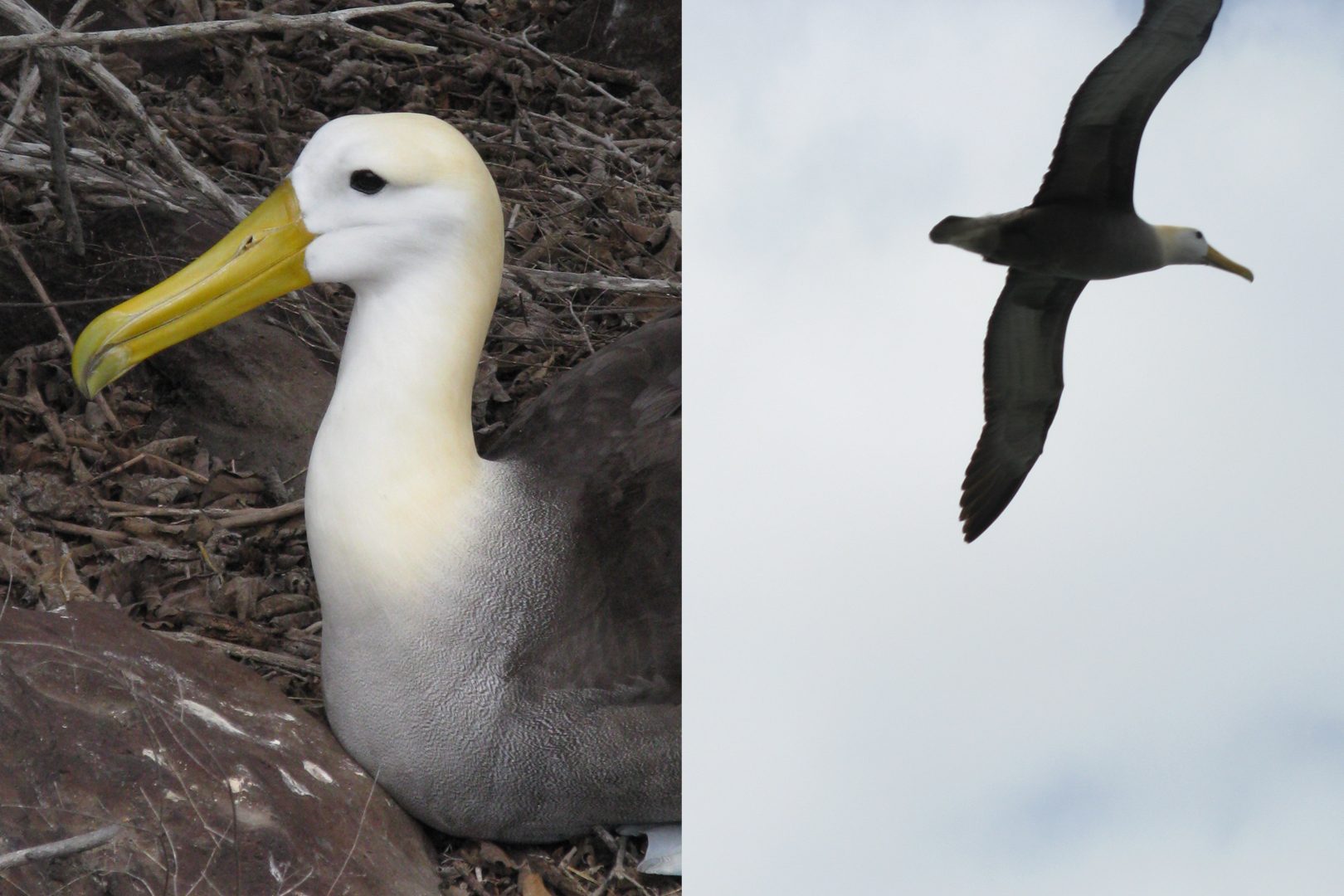 We saw Galapagos sea lions not only on remote beaches, but everywhere, including sprawled out taking a nap on the benches in town or waiting patiently for scraps at the fish market in Puerto Ayora. On Punta Espinosa on the island of Fernandina, we sat on some rocks and watched two tiny baby sea lions wrestling just a few feet away, completely unfazed by human presence. The male sea lion of the group swam by with his watchful eye every few minutes to make sure they weren’t getting into too much trouble. On another day, one of our panga rides took us to a secluded cove where a large colony of sea lions lives. We slid off the panga into the shallow pools of water and swam with them, while our guide explained to us how they love games of imitation and will copy your every turn, splash, and jump. 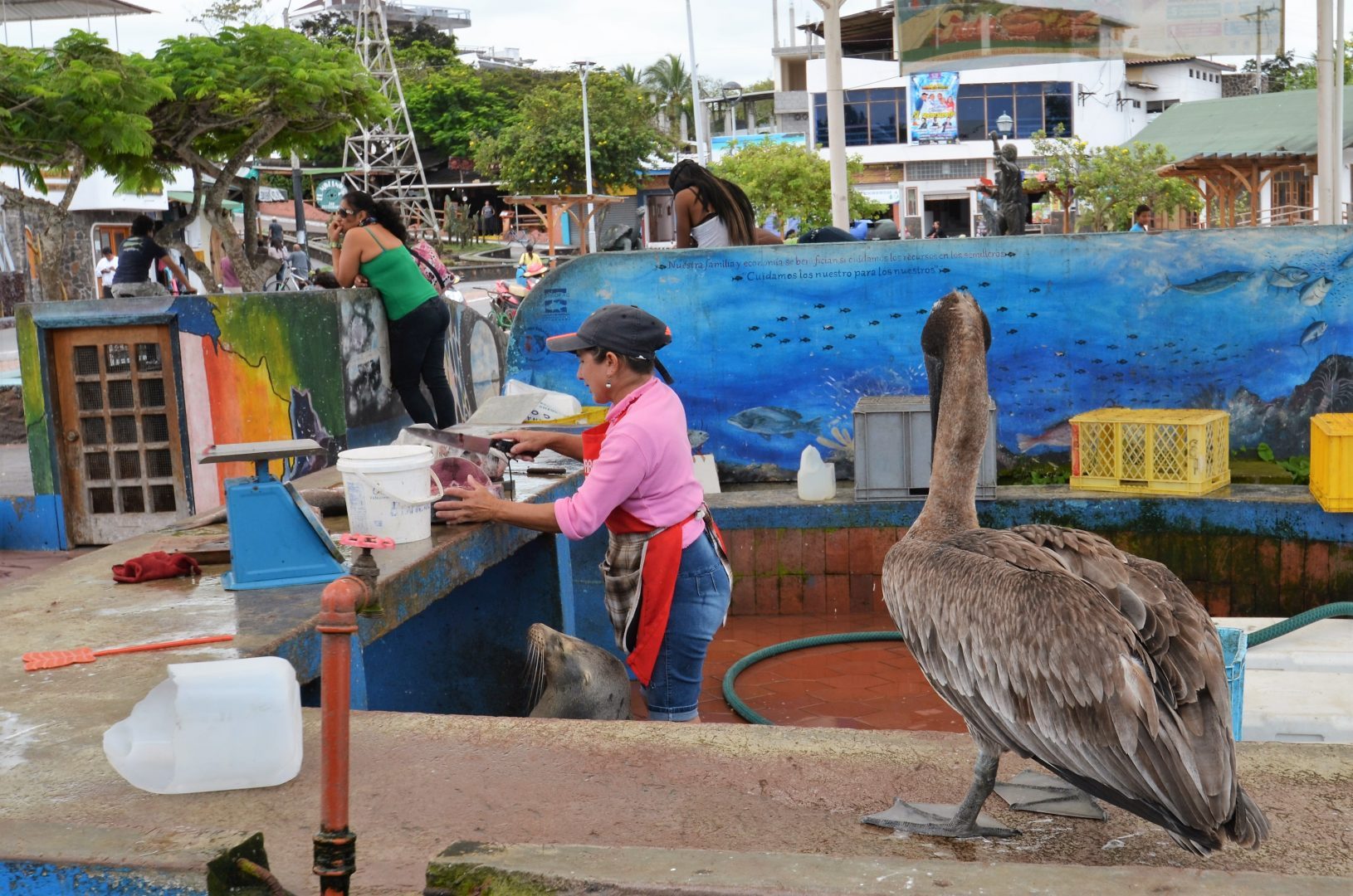 Wildlife at the market

The blue-footed boobie is not actually endemic to the islands, since they can be found in other spots along the Pacific coast, but over half of all breeding pairs nest here and this is the only place to see their famous turquoise feet so up-close and personal. The biggest and most important breeding colonies are on Española and North Seymour, but you can see them flying around on other islands. From my sea kayak one day, I watched flocks of boobies hunting for fish, gliding high above the water and then suddenly turning at a sharp 90-degree angle and plummeting into the waves at speeds of up to 60 mph. 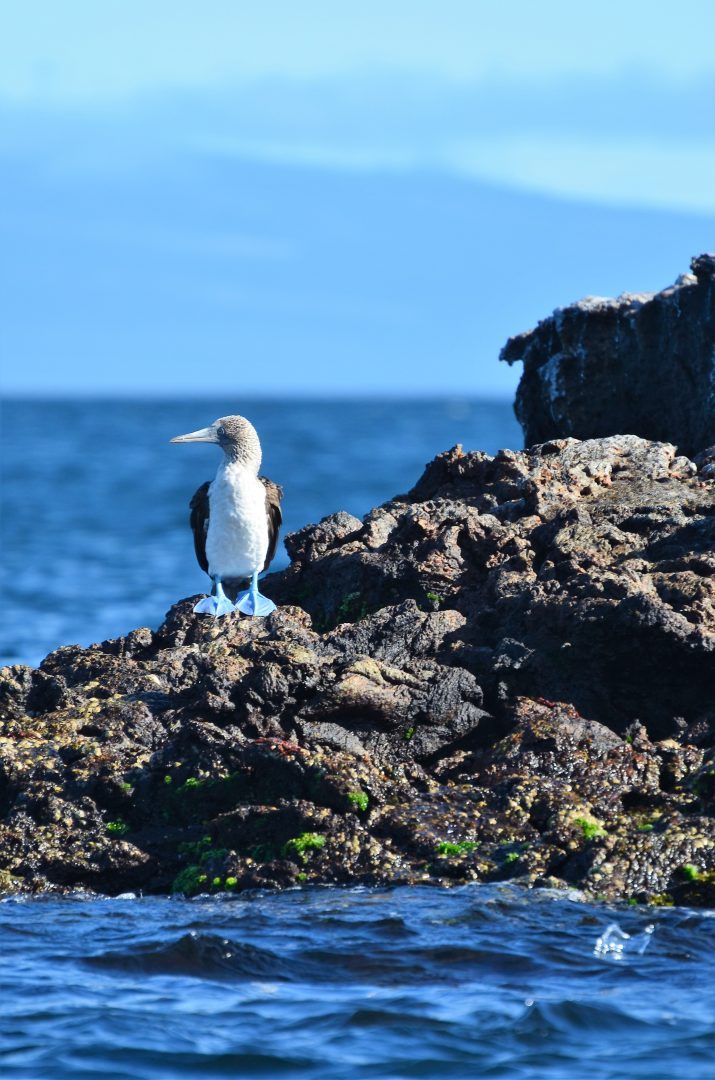 If you’re interested in seeing these fascinating animals yourself, click here to see some of our favorite cruise vessels or contact us to start planning your Galapagos vacation. You can witness some of the world’s most dramatic examples of evolution in the Galapagos Islands. Even more compelling, you get to experience them in unique ways found nowhere else on earth. 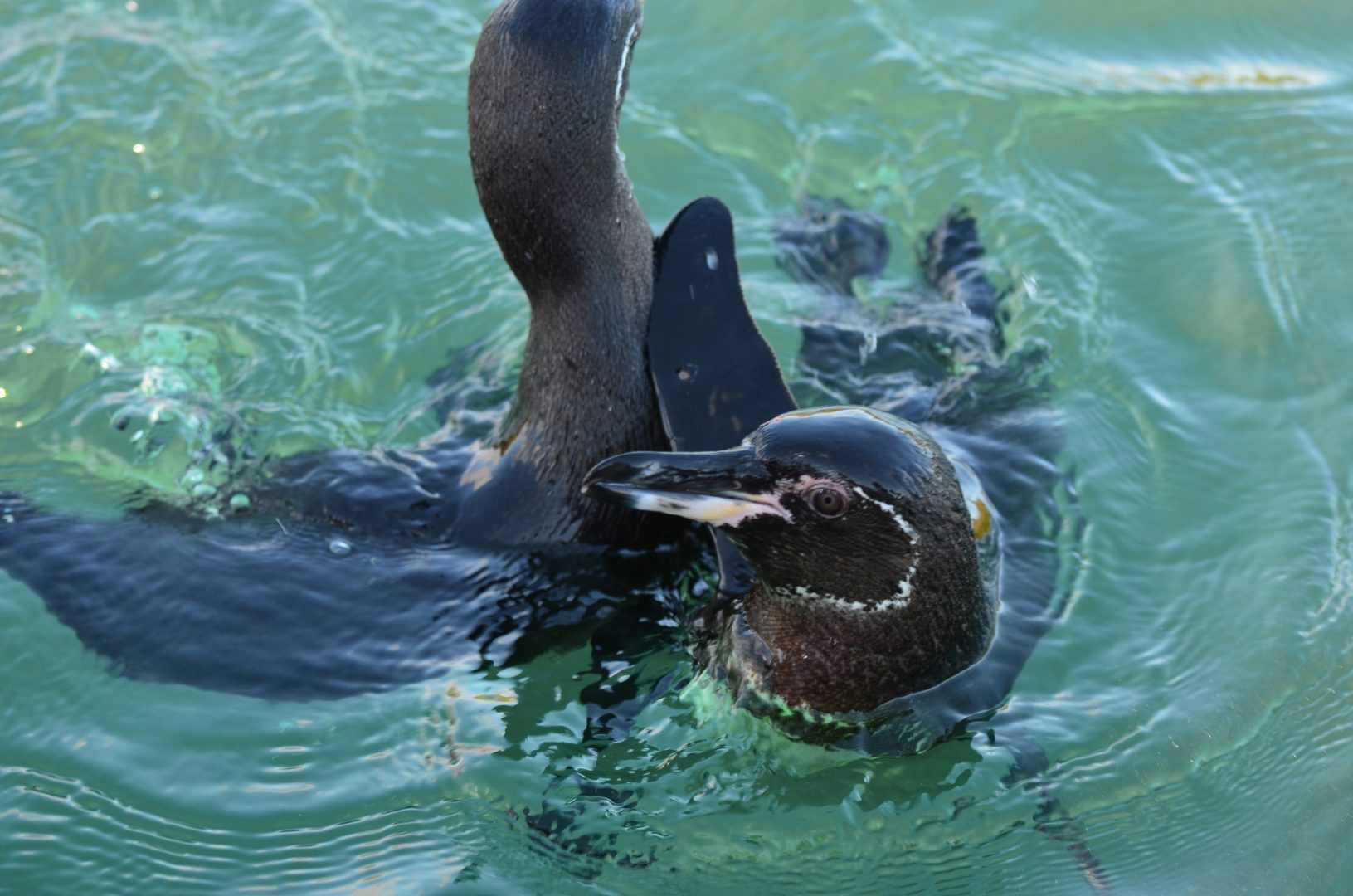 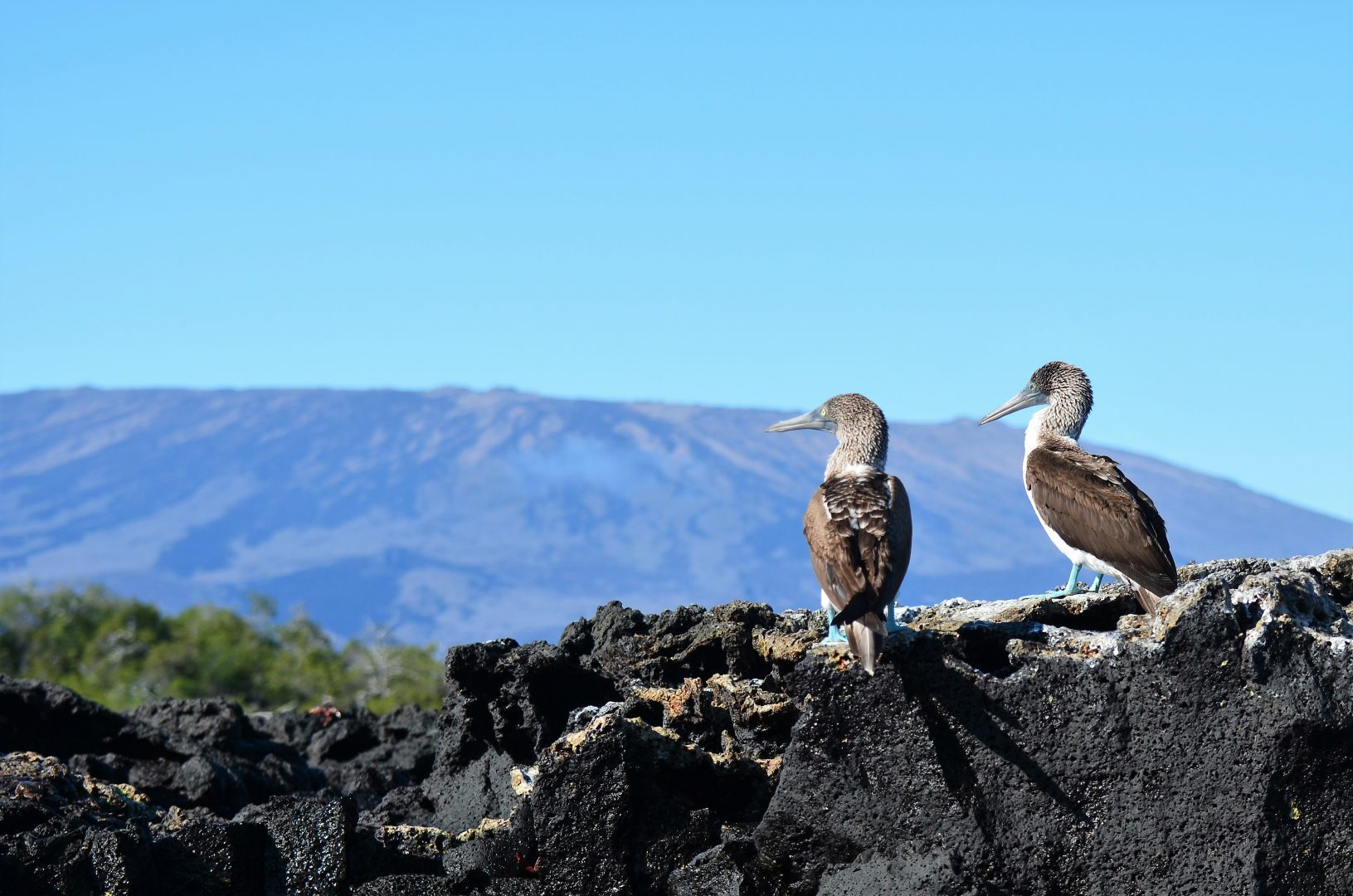