Beyond Ceviche: Mistura and the Diversity of Peruvian Cuisine 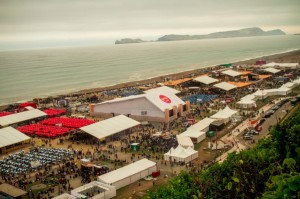 Many in-the-know travelers rank Peru among the world’s greatest food cultures, and Peruvian cuisine has begun enjoying widespread international recognition. This is due in part to chefs whose fame has grown outside of Peru, such as Gastón Acurio, whose flagship Lima restaurant Astrid y Gastón has consistently been at the top of Best Restaurant lists for years. Growing out of this momentum (what they call in Peru the “gastronomic boom”), the Mistura culinary festival was inaugurated in 2008 by several Peruvian chefs who wanted to bring together the diversity and richness of Peruvian cuisine and showcase it for the world. Hosted each year by la Sociedad Peruana de Gastronomia (the Peruvian Society of Gastronomy, also known locally as Apega), Mistura happens in September and attracts thousands of local limeños as well as Peruvians from all over the country, foreign foodies, and journalists. In its first year, Mistura hosted 30,000 people. This year they sold 321,000 tickets and held the event on a large stretch of beach in the neighborhood of Magdalena del Mar, approximately 25 minutes from the neighborhood of Miraflores, where most of our clients stay in Lima.

I was fortunate enough to attend Mistura 2014, and was blown away by the scale of the event and the quantity of choices. More than 240 restaurants were present, selling items that cost between 3 soles and 16 soles (about US$1- $5.50). The event is organized into 16 different “culinary worlds,” which showcase different facets of Peruvian cuisine. Naturally ceviche, Peru’s most famous dish, had its own section, but I was surprised to see how much diversity there is beyond this dish. There were sections for the Amazon and the Andes, Northern Peru, Southern Peru, Chifa, and Nikkei, and even the humble Street Vendor style of food was given its own place and appreciated alongside the gourmet offerings. Chifa, which blends Chinese and Peruvian influences, and Nikkei, a fusion of Japanese and Peruvian, owe their existence to the immigrant history that has formed part of modern Peruvian identity. Both types of food use the culinary traditions of their countries of origin, but with local Peruvian ingredients. The results are delicious. 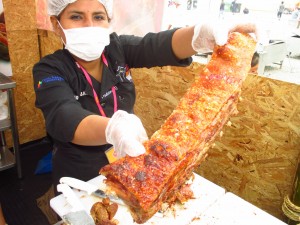 One of the most popular items for sale at Mistura was the Caja China style of pork. Caja China literally means “Chinese Box” and is a way of roasting pork and other meat. Unlike a traditional barbeque, in a Caja China you place the coal above the meat for cooking. The meat goes inside the box on a rack, and the coal goes above it on a metal shelf, creating an incredibly crispy skin and juicy, tender meat. The queues were the longest for this style of pork as well as chanco de palo, another way to roast pork over large piles of coals. 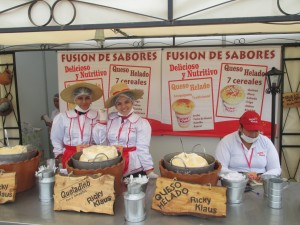 It was impossible to try even a little bit of everything on offer, and I must admit after gorging myself on ceviche and pork, I spent most of my time in the World of Sweets, where Peruvian chocolate in every form was on offer. This is where I was also able to sample Quinoa ice cream and other desserts made from exotic Amazonian fruit such as camu camu and aguaje.

In a country still struggling with deep socio-economic inequality, Mistura is, in a small way, helping to bring the together diverse population of Peru, by unifying it with something that most Peruvians hold dearest to their heart: Peruvian food.

If you are interested in Peruvian cuisine, ask us how we can create a custom itinerary for you that includes the opportunity to sample this country’s incredible food, and if you are able to travel in September, can also feature a day at Mistura.