Exploring the MALBA in Buenos Aires

One afternoon, as my husband and I explored the Palermo neighborhood of Argentina’s capital city Buenos Aires, the skies opened up, and a downpour ensued. Fortunately, it just happened to be a Wednesday, and Wednesday is a discount admission day at the MALBA Museum, so we headed on in.  It was a serendipitous event, because this museum is something special.  It qualifies as a must-see for anyone interested in 20th century and contemporary art.

What’s Happening at the MALBA? 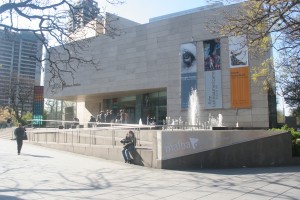 While its real name is Museo de Arte Latinoamericano de Buenos Aires, it’s easy to see why everybody calls it the MALBA. The founder of the museum –Argentine businessman Eduardo F. Costantini — wanted to establish an institution that recognized and celebrated the creative achievements of 20th century and contemporary Latin American artists.  The MALBA opened in September of 2001. Today, over 270 works, spanning the entirety of the 20th-century and early 21st century, embellish its interior.

Three young architects designed the angular, avante-garde building that houses the museum and its impressive collections. Enter its doors, and explore the works of giants of Latin American art, including Frida Kahlo, Xul Solar, Diego Rivera, Joaquin Torres-Garcia, Guillermo Kuitca, Antonio Berni and many others. Throughout the year, temporary exhibits augment the existing collections. The first-floor auditorium at the MALBA hosts screenings of vintage and contemporary films from Argentina and all parts of the globe.  The museum is also often a stop on the circuit of renowned traveling exhibitions.  Its manageable size make it a great stop for an hour or two to see the main galleries.

The chronological arrangement of art at the MALBA begins with a room dedicated to the political art of the 1930s.  Here, you’ll find Antonio Berni’s Manifestacion (1934), a social realist portrayal of a crowd of faces in a state of protest. The artistic journey continues into the 1940s and 1950s, where Surrealism dominates the scene, and thought-provoking paintings such as Frida Kahlo’s Autorretrato con Chango y Loro (Self-portrait with Monkey and Parrot) draw your attention.

We were then introduced to the minimalist, conceptual and pop art that prevailed throughout the 1960s and 1970s. Being a kid at heart, I particularly enjoyed the museum’s selection of Kinetic works, which includes Julio Le Parc’s Seven Unexpected Movements, a sculpture whose parts move with the press of a button.

One thing I never like to do is traipse through a museum when I’m hungry, and if I’m really hungry, don’t show me anything that reminds me of pasta. I was out of luck. Pablo Reinoso’s Enredamaderas, part of his iconic “spaghetti bench” series, was on temporary display.

As its name implies, the piece consists of a slatted bench, but one whose slats extend like tendrils of cooked spaghetti, form a vine across the museum’s atrium and connect with another slatted bench on a floor below. In case you’re wondering, you can in fact sit on these benches. Creative furniture is typical at the MALBA.

Fortunately, the museum restaurant, called the Cafe des Arts, serves a wonderful pasta with mushrooms, which more than adequately satisfies the need for physical nourishment, and does so with a French accent. If you just want a quick snack, try the smile-inducing Pain au Choclat.

If you’re looking for something not quite so typical to bring home (something besides the mate gourd and box of alfajores), you could find something at the TiendaMalba, the museum’s gift shop.  TiendaMalba has all of the usual suspects, including the obligatory art books, jewelry, prints, and souvenirs, many adorned with images of the work of Xul Solar, perhaps Argentina’s most renowned and original artist.