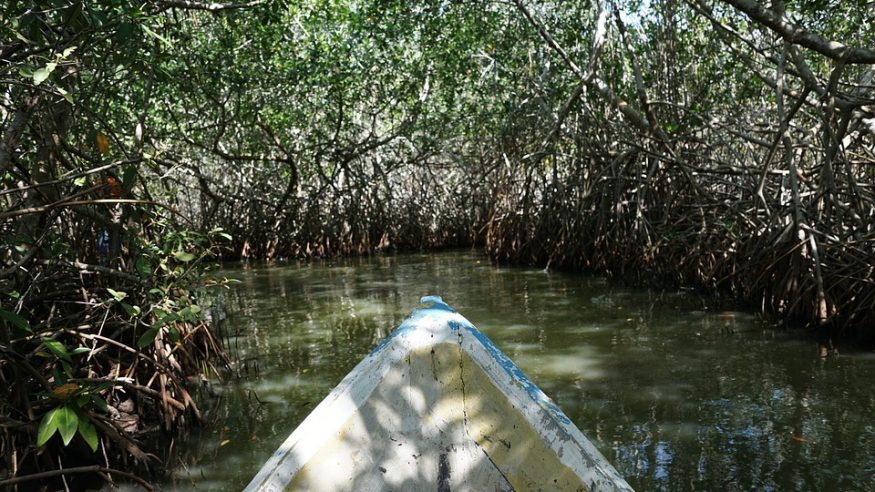 It was a hot, sunny morning when we pulled up to La Boquilla, a small fishing village on the outskirts of Cartagena, Colombia. The white sand beach was wide and flat and the ocean calm and inviting, but we were headed away from the coast and into the mangrove swamp in a dugout canoe.

The mangrove swamp of La Boquilla is the most extensive of its kind in the Cartagena area. Mangroves are salt-tolerant trees that grow in coastal waters. They are adapted to life in harsh conditions due to their complex root systems, which evolved to filter saline water. This root system also protects the coastal area from high wave action, creating a microclimate suitable for the development of delicate species.

We sat down to watch a dance performance by the local villagers. La Boquilla is a small village that is very off the beaten path. The performers danced to traditional Colombian music, Caribbean Cumbia, a toe-tapping mix of percussion and Indian flute. The women wore bright, colorful dresses with wide ruffled skirts that they held out to either side by the hems, creating a full, rippled silhouette as they twirled.

After the dance, we hopped into the canoe with our guide, a local fisherman, who took us through the winding maze that is the mangrove swamp. Along the way, he pointed out the local flora and fauna that was a part of this microclimate. We saw several species of birds, including a few Kingfisher and the occasional White Heron. We also saw oysters clinging within the root system of the mangroves, as we had arrived at low tide. Our guide also pointed out quite a few reptiles. With their natural camouflage in the woody, leafy overhead branches, it takes a keen eye to see them, and many of them were so well disguised within their surroundings that I never would have spotted them without the help of our guide. 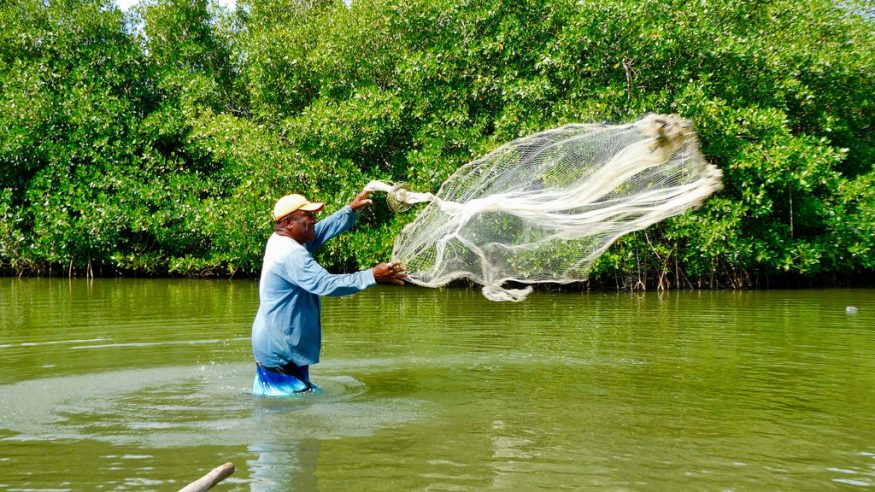 After cruising through some of the shaded tunnels, we headed out to the more open waters of the mangrove swamp, where there were a few local fishermen out casting their nets. They were standing thigh deep, and each toss sent their nets in a wide arc into the murky waters of the swamp. We approached them in our canoe and were introduced so they could show us their morning’s haul, a bucket full of scrabbling blue crabs. Another function of the complex root system of the mangroves is to filter the ocean water so only a fine silt remains. This silt settles on the floor of the swamp, creating a soft mud ideal for shrimp, lobster, and crab colonies, which eat the mangrove leaves and add nutrients to the mud.

After another turn within the complex mangrove swamp system, we visited a group of houses where some of the villagers lived. These small, wooden houses are built on stilts above the mangrove swamp. Building a house on stilts serves two purposes: to prevent the house from flooding as the tide rises and falls, the respective levels of which change dramatically throughout the year; and to allow airflow below the house, which helps keep the interior cool. Though the houses were reachable on foot when we were there, each residence had one or two dugout canoes tied up outside for when the water levels rise.

When we finally emerged from the mangrove swamp and returned to the beach, we were ready for something to eat – or maybe it was looking at the bucket of fat, freshly-caught crabs that whetted our appetites. Awaiting us was a long line of thatched-roof restaurants, and our guide pointed us toward his favorite. There, we feasted on traditional Colombian seafood while we sat facing the rolling waves of the beach with our feet in the sand. The beach was practically deserted, and it felt like we had the place to ourselves as we picked crab meat from its shell.

If you are interested in visiting Colombia to see what else Cartagena has to offer, please contact us about our recommended Colombia itineraries.