The Lakes Crossing between Chile and Argentina. For those who travel to the Chilean or Argentinian Lake District (most notably, Puerto Varas and Bariloche, respectively), it’s undoubtedly a great way to see more of the fantastic scenery of these areas. It’s also the most effective way to combine visits to both sides of the border in this region. On a recent trip to the south, however, I had the chance to do the Lakes Crossing with a twist, crossing from Chile to Argentina in a much more off-the-beaten-path way, which also included a couple extra nights along the way in this exceptionally scenic part of the world.

My trip started in Puerto Varas, Chile, where I did some road biking with one of our local guides. There are more and more excellent biking routes added to Puerto Varas each year, showcasing this beautiful area. (Ask us about them!) After a couple days cycling around Lake Llanquihue, I set off for Argentina. The usual crossing involves taking a boat across Lake Todos los Santos to Peulla, continuing overland to Lake Frias, crossing by boat, traveling overland to Lake Nahuel Huapi, and crossing the rest of the way by boat to Bariloche. It’s a great day and you get to see some spectacular scenery, but the route is somewhat well-traveled, and it can make for a long day as well. I had heard about an alternate route to get from Puerto Varas to Bariloche, down just slightly south of the more famous version, and decided to go explore it on this trip. 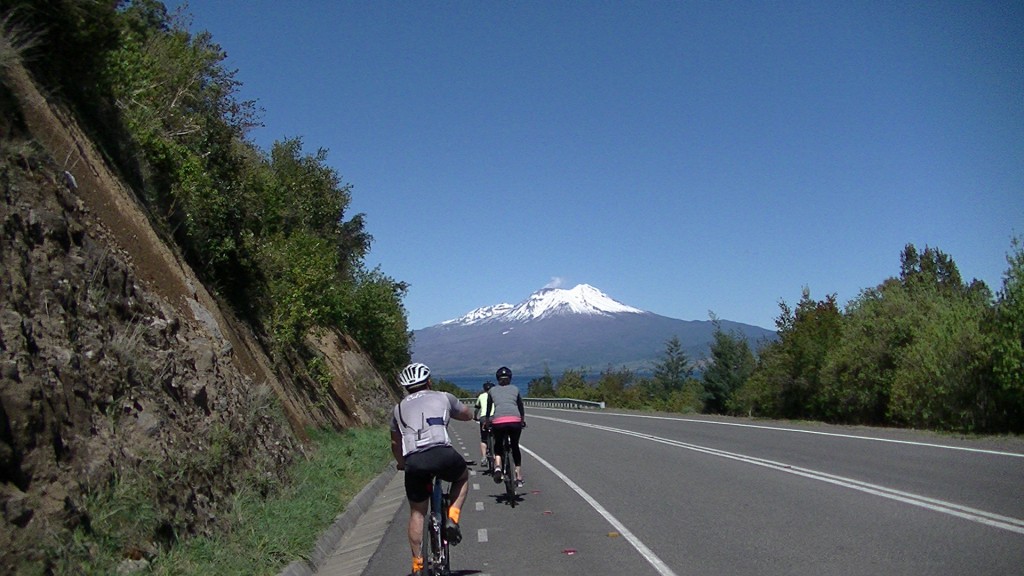 My traveling companions and I, along with our guide and driver, set out from Puerto Varas around 9 a.m. Rather than heading north to Lake Todos los Santos, we went south, toward the town of Cochamo. Cochamo lies along the Reloncavi Sound, which comes up from the Pacific Ocean, so scenery here takes a dramatic turn from that of the more inland areas of the Lake District. A few crusty wooden fishing boats litter Cochamo’s harbor, and the distinct feel of being by the sea is unmistakable in this town, although the combination of sea and mountains is like few landscapes that come to mind. We soon turned inland heading southeast, arriving to the town of Puelo around noon. Puelo sits near Lake Tagua Tagua, and the only way forward from here is by ferry boat. We had arranged to have lunch at the Mitico Puelo Lodge, in the middle of Lake Tagua Tagua, so as our driver took the van across on the ferry, we dined and enjoyed the spectacular scenery of this remote lodge reachable only by boat. We didn’t stay at Mitico Puelo for the night, but doing this version of the lake crossing with a stay here would be possible, and a great option for those looking for a bit more of a hotel-like experience than the Bandurrias Cabins, our next stop. 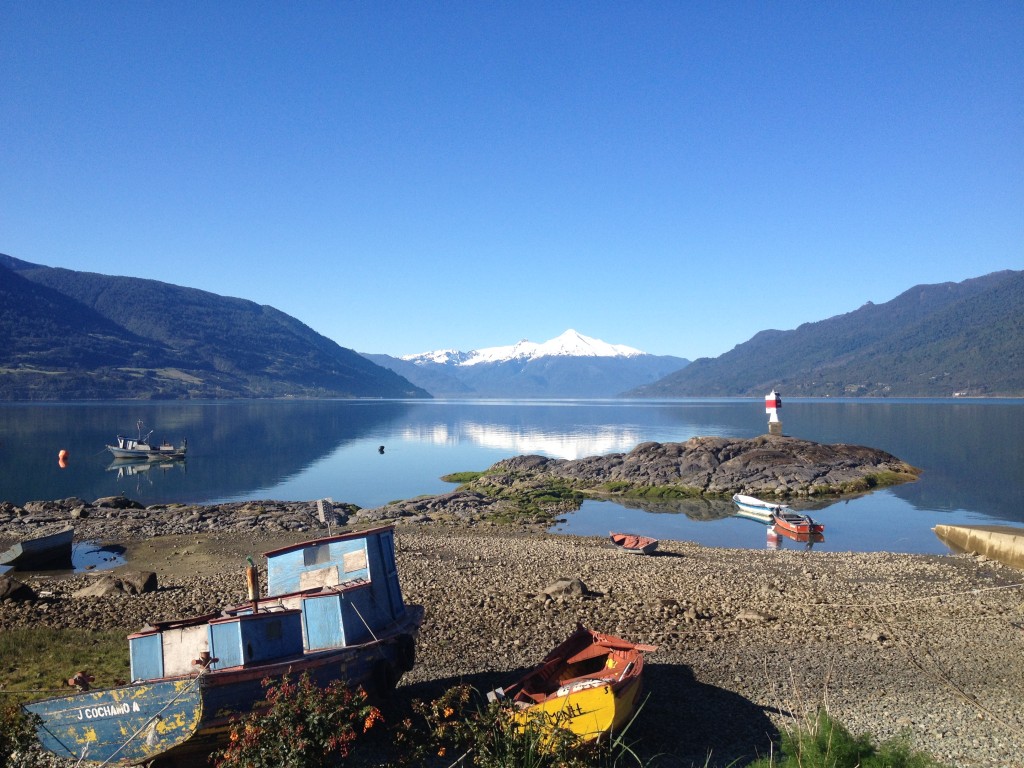 After lunch we continued southeast along dirt roads for about two hours, passing through Llanada Grande, Primer Corral, and Segundo Corral and finally reaching La Colina. La Colina is truly the end of the line for cars in this part of Chile, and it’s where we met Cathy Bernard, our host for the next 2 nights. Cathy runs Isla Bandurrias (Bandurrias Island) with its modest cabins and primarily horseback riding-based tourism operation. If you have any interest in horseback riding, I highly recommend taking the time here to participate in at least one day of riding, though it’s not required for a wonderful stay. The island is simply breathtaking, and a pleasure to explore whether you’re on a horse or on foot.

To reach the island, we took a small motor boat out from La Colina. The island houses a main cabin, where Cathy and a few staff live (with a few guest rooms), and a separate guest cabin – this is the entirety of lodging on Bandurrias. The island and the accommodations are rustic. There is only solar-powered electricity, and heat for the cabins as well as hot water for showers is provided by wood-burning stoves. Isla Bandurrias is not only off the beaten path, it’s off the grid. And that’s one thing that makes it so great. It is nice from time to time to be able to truly disconnect and just enjoy a remote, fantastically beautiful place in the world. It was the highlight of my trip. 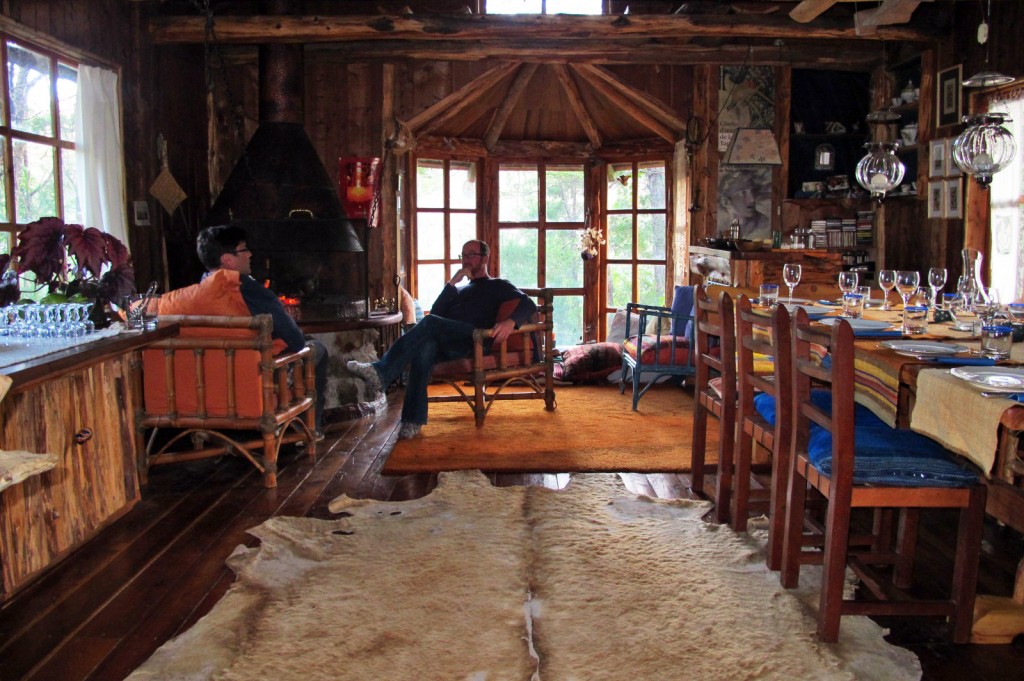 After our two highly enjoyable nights on Bandurrias, I set off by motor boat for the Chilean border. A tiny house with two international police officials are all that make up this post. From there we motored up the inferior and superior portions of Lake Puelo (including a stretch of river, complete with rapids!) by speed boat for about 2 hours until reaching the town of El Bolson, Argentina. Aside from the border police and the boat captain, I didn’t see another soul in the zone that lies between the two border checkpoints. A truly remarkable and remote area of the “neutral” Lake District. From El Bolson, it was a final drive of approximately 2 hours to Bariloche.

I strongly recommend doing the alternate lake crossing (or some variation on it, several of which are possible depending on how long you take to cross) if you’re planning to connect the Chilean and Argentinian Lake Districts. It was a wonderful experience and one I won’t soon forget.